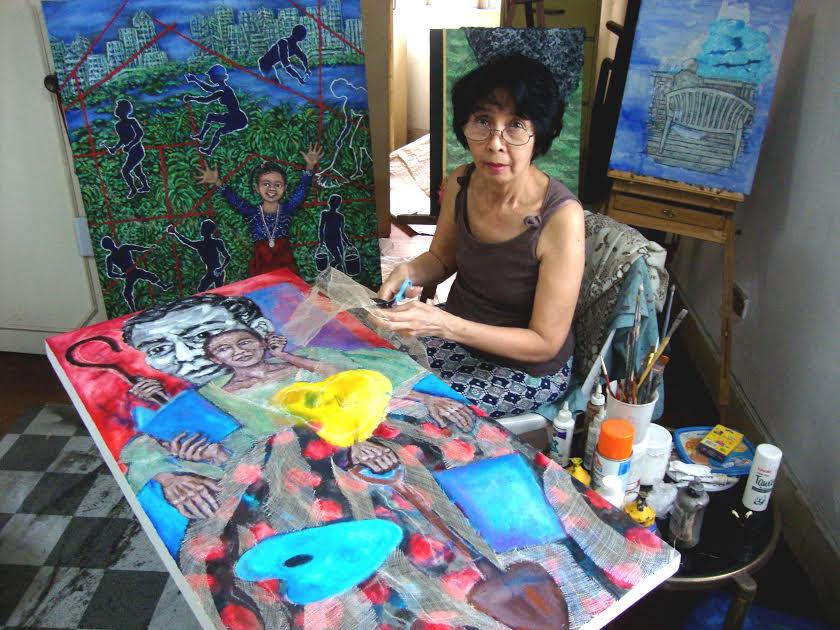 Imelda Cajipe-Endaya: Woman and artist for all seasons

“Upheaval” is a disturbing piece of art. It has just been mounted in Tagaytay Highlands, in On the Third Day Institute for Renewal and Formation. The 68”x 92” acrylic-and-fabric collage on canvas is Imelda Cajipe-Endaya’s latest mural.

For the artist, it reflects self-transformation, which is “necessary in liberating the people from current social ills.”

Cajipe-Endaya (called Meps by friends and acquaintances) is known for her art advocacy focused on women and centering on the nation’s history and culture. She cofounded the feminist organization Kasibulan in 1987 and was its first president.

She has consistently explored the themes of national identity and people empowerment, gender, race, migration, displacement and globalization in her artworks.

Benedicto Cabrera and Ofelia Gelvezon Tequi were influences in her early days of printmaking even while she did etching, collagraphy and silkscreen in the 10 years following her graduation from University of the Philippines’ College of Fine Arts with a Bachelor’s degree in Advertising in 1970.

She started oil painting in 1981, producing pure ones or mixed with magazine collage. She embarked on acrylic in the 1990s. Aside from drying faster, this medium made her avoid toxic fumes.

Meps never tires. She took up graduate studies in Art History and Criticism in 1976-1977, again in UP Diliman, thus starting her long and tedious archival research on Philippine historical images. Her reward was “Ninuno,” a series of prints done in 1976-79, reflecting her generation’s search for identity.

Now part of the Cultural Center of the Philippines (CCP) collection, she considers the series her most significant work.

It goes in tandem with “Pasyong Bayan” (1983) which, to her, “expresses the people’s rage against the human-rights violations perpetrated by a dictatorial regime that resulted in the loss of our democratic freedoms.” It is now part of the Metropolitan Museum of Manila collection.

Meps has received the gold medal in printmaking from the Art Association of the Philippines in 1979; Mayi Critics’ Choice in 1980; CCP 13 Artists Award in 1991; special award from the Cheju Korea pre-Biennale in 1995; Araw ng Maynila Award for Painting in 1998; RP Centennial Honors for the Arts in 1999; and artist-in-residence at Ecole Cantonale d’Art du Valais, Switzerland in 1999.

Meps and husband Simplicio lived in the United States from 2005 to 2009. They took day jobs even as she continued her love affair with the arts.

She exhibited and won prizes in the Oconee Cultural Arts Foundation Annual Art Exhibitions in New York in 2005 and 2006; and in the American Society of Contemporary Artists (Asca) of New York City in 2009.

She won the Irwin and Florence Zlowe Memorial Award in Asca’s annual exhibition in 2008; and first place in the “Beautiful Aging” painting competition in the United Hebrew-Lazarus Gallery, in New Rochelle, New York, in 2009.

As if being an artist and curator was not enough, Cajipe-Endaya took it upon herself to be an author and designer of books. Among her products along this line are “Manuel Rodriguez Sr: Into the Threshhold”; “Nelfa Querubin: A Passion for Clay”; and “Kasaysayan ng Ating Bayan: Ang Pilipinas Noon at Ngayon” (Volumes I-IV, authored by Fe B. Mangahas).

From her own home, she gathers materials for her work—her grandmother’s shawl, her mother’s crochet, her aunt’s veil, her beaded slippers, her childhood clothes—mementos of women in her own family that are at once reflection of the woman of our Asia-Pacific world, woman gaining mobility and fulfillment for herself while striving to live meaningfully for others.

While she looks forward to being a more effective cultural advocate by creating more pieces that confront contemporary problems, Meps asks herself why the same sociopolitical issues hound our lives today, albeit manifested differently.

She says: “Our most powerful leaders continue to just think of themselves and serve their own interests. In this age of ‘alternative facts’ and ‘alternative truths,’ the world and our country are in disarray, having elected leaders that play Satan against Satan. Through the dark, we search for the light.”

Meps’ 1995 artwork “The Wife Is a DH” is being exhibited at Ilham Gallery in Kuala Lumpur. It is an installation of suitcase, plaster statue, books, plaster-bonded papier mâché and other found objects.

It had been exhibited in the Japan Foundation’s Asian Modernism Exhibition in Tokyo, Manila, Jakarta and Bangkok, and has since 2013 traveled to museums and galleries in Thailand, Korea and Hong Kong.

The show, which runs until April 15, is in memory of two great women, cultural activists, gallery owners and artists: Odette Alcantara and Norma Liongoren. —CONTRIBUTED

Contributor heads the Maningning Miclat Art Foundation which is holding a Trilingual Poetry Competition this year. Deadline of submission is on April 15.