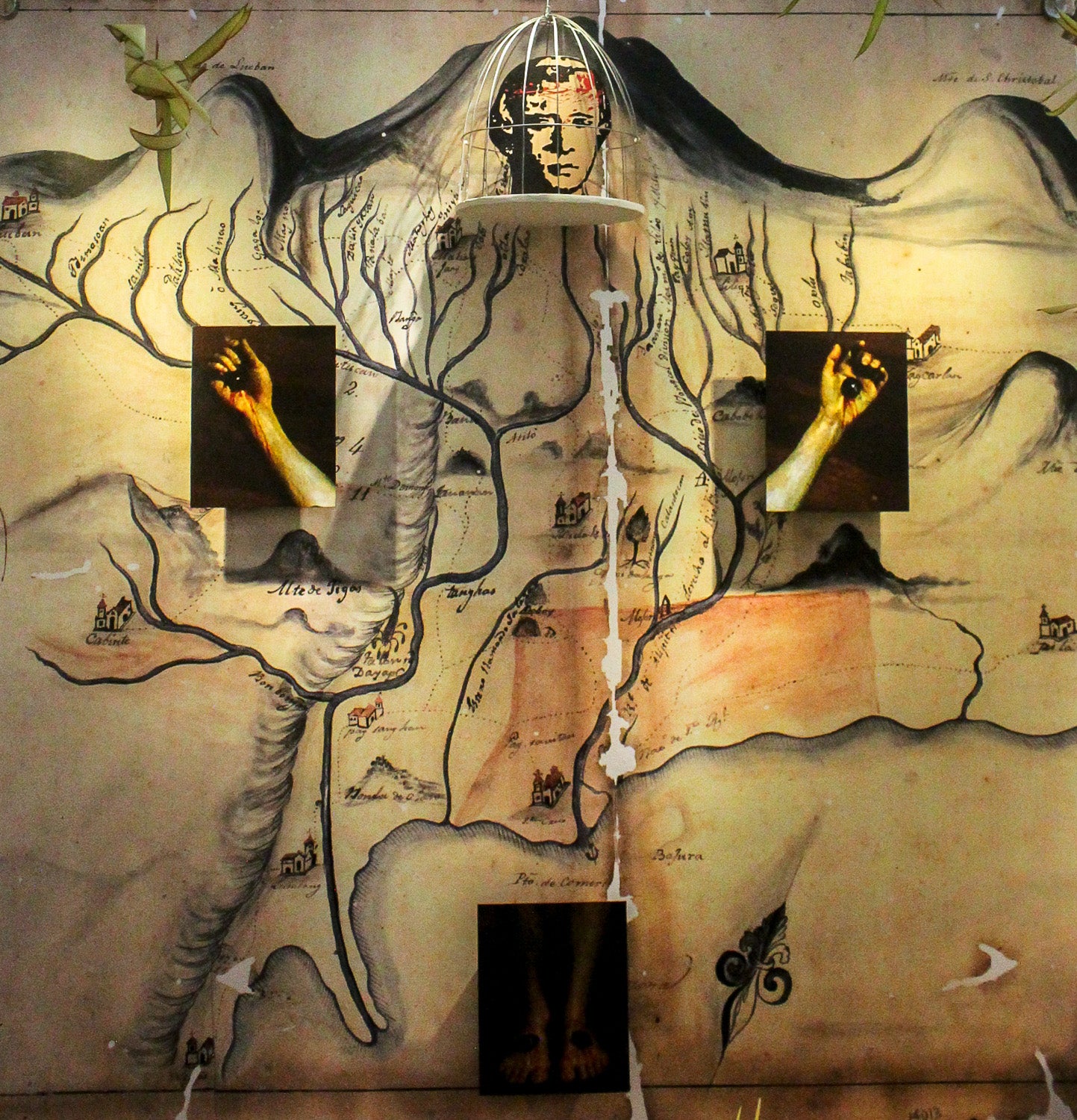 Resurrection: The execution of Hermano Puli, artfully illustrated in a collage at the Villa Escudero Museum exhibit, only fueled the Filipino brotherhood.—PHOTOS BY ELOISA LOPEZ

The story of Apolinario de la Cruz, aka Hermano Puli, is an archetypical tale of colonial oppression.

Founding a native religious confraternity in the 1830s, he was persecuted by the Spanish friars, tried and executed in 1841—two decades before José Rizal was born; three decades before the Gomburza were executed; and over half a century before Gregorio Aglipay established the native church.

His story is picturesquely told in “Cofradia/Komunidad: The World Embraced by Hermano Puli” at Villa Escudero Museum in Tiaong, Quezon province.

Billed as “an interactive conversation between the records of the National Archives of the Philippines and the artifacts in the collection of the Escudero family,” the exhibit runs through early next year. It is co-curated by National Archives executive director Victorino Mapa Manalo and GSIS Museum director Raymundo Andres V. Palad.

This is part of the National Archives’ program to popularize its vast collection through exhibits such as those it has mounted in Vigan, Iloilo and Cebu. (For the exhibit “Conscripcion: Imagining and Inscribing the Ilocano World” held at Metropolitan Museum of Manila in 2011, they had to bring down from Ilocos Sur the series of 14 paintings by Esteban Villanueva chronicling the Basi Revolt, now declared National Cultural Treasures.)

“We have plenty of records in the National Archives,” says Manalo. “We have records on Hermano Puli, so this exhibit.”

A primal inspiration is his interest in folk spirituality centered on the mystic mountain of Banahaw, with which Hermano Puli is identified.

Manalo and Palad, who have been working together since 2004, started mounting the exhibit in January. They did study trips and spent about three weeks in constructing the display, commissioning artworks and rearranging the museum’s artifacts to shape a compelling narrative.

The exhibit has 14 sections, referencing the Stations of the Cross. It is a progressive display of sacred pictures and religious statuary, antique prints and paintings, topographical maps and sketches, curios, drawn from the extensive holdings of the museum. Documents and textual materials accompanying each section are from the National Archives.

At its opening lavishly hosted by plantation scion Conrado Escudero last month, Manalo herded the guests up the church-museum’s second level in a symbolic act of peregrinación.

Why Villa Escudero, when it’s about two hours of travel time for potential museum-goers from Manila?

“Because this is the premier museum of Quezon, where Hermano Puli was from,” says Manalo. “This is the largest in the area. It has over 200,000 visitors a year. And we want to focus on the people in this area. Hermano Puli was active in Tayabas [now Quezon province] up to Majayjay in Laguna.”

Manalo speculates Puli might have inspired Rizal to create in “Noli Me Tángere” the insurgent character Isagani, who’s from Tayabas.

The first section, “Baptism,” displays in its entirety the original retablo baptistry of the church of Lucban on the slopes of Mt. Banahaw, where Puli was born to peasants. Images of water (a mystical element) and ferns indigenous to the mountain are incorporated in the display.

Manalo believes Puli must have been immersed in this baptismal font since it belongs to the same period.

Puli’s family was devout Roman Catholic. He wanted to be a priest, but as he was an indio, his application to join the Order of Preachers was rejected.

The next section, “Climbing the Mountain,” starts as the museum-goer climbs the staircases to the upper floor, paralleling Puli’s pilgrimage to Banahaw to gain some mystical experience.

Barred from entering the priesthood, Puli decided to form a native religious order and founded Cofradia de San José, when he was only 18. In less than 10 years, it grew to some 5,000 members, mostly from Tayabas, Laguna and Batangas. No Spaniard or mestizo was admitted.

Armed with scapulars and prayer books, the group went on pilgrimages, visiting the Virgin of Antipolo, St. Gregory the Great and Our Lady of La Porteria in Majayjay. They fostered the practice of “Christian virtues centered around the cults of St. Francis of Assisi and the Virgin of Antipolo.” Which is ironic, considering it was the Franciscan friars who kept hounding them.

The confraternity sought recognition by the Church, but as they were incorporating folk rituals and beliefs the Church hierarchy found unorthodox—the use of anting-anting (talisman), folk superstition, cultism—they were suppressed. This led to a skirmish with the authorities.

In the barrio of Alitao, where Puli transferred his camp after the skirmish, the people crowned him “King of the Tagalogs.” Government forces from Manila came and slaughtered hundred of his followers, mostly old men, women and children. Puli survived but was captured in Sariaya.

The penultimate section, “Embracing the Light,” tells of his execution by firing squad at age 27. His body was quartered—the head hung in front of his parents’ house and Lucban church; the hands and feet displayed in cages in the guardhouses at the entrances of Tayabas town.

With images of suffering and self-sacrifice here—Rizal’s execution in Bagumbayan, crucifixes and primitive crosses—it is made clear his ordeal is paralleled with the travails of Rizal and the Passion of Christ.

The final section, “Continuations,” assesses the legacy and influence of Hermano Puli.

The authorities, probably thinking scattering his body parts all over the place would warn the people of his “heresy” or prevent them from “resurrecting” him, only fueled the movement, as the Crucifixion did the spread of Christianity.

Years later, his surviving followers revived the confraternity, drawing mystic energy from the sacred mountain. And so rose the Colorums.

Manalo concludes: “He was the cause for the rebellion of the Tayabas regiment in 1843. He, too, was the inspiration of movements on Banahaw in the 1870s. It is uncertain whether he inspired Rizal, the Katipunan, or groups like Lapiang Malaya.”

This is a clever show, from the charming trope of gallery-going as religious peregrination, to the subtle interaction of text and object. One can see Manalo and Palad are more than just curators; they’re also installation artists.

Clearly it’s not just the life story of a forgotten hero we are seeing in this exhibit, because it feels it has unfolded the whole colonial experience.