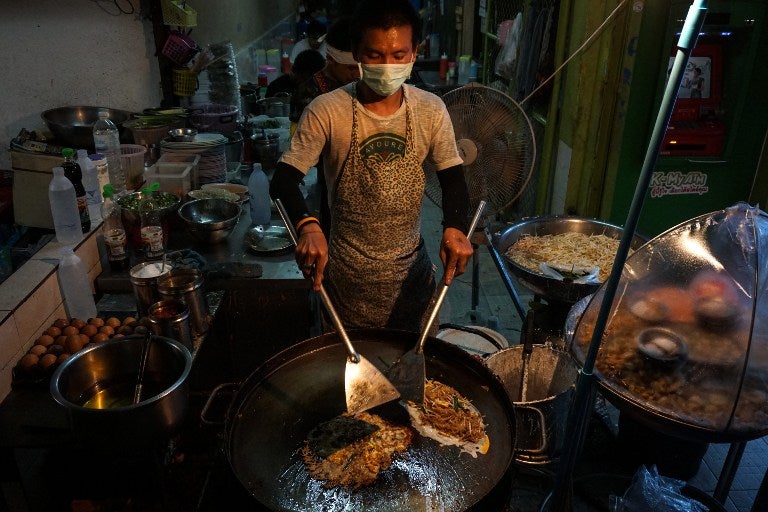 This photo taken on April 17, 2017 shows a man making food at a street stall in the Phrakanong district of Bangkok. Street food stalls will be banned from all of Bangkok's main roads under a clean-up crusade, a city hall official said Tuesday, prompting outcry and anguish in a food-obsessed capital famed for its spicey roadside cuisine. / AFP PHOTO / LILLIAN SUWANRUMPHA

Street food stalls will be banned from all of Bangkok’s main roads under a clean-up crusade, a city hall official said Tuesday, prompting outcry and anguish in a food-obsessed capital famed for its spicy roadside cuisine.

For months city officials have hemmed in hawkers of all kinds across the metropolis, where hitting the pavement for everything from late-night noodles to fried insects is the closest Thailand has to a national pastime.

“All types of stalls including clothes, counterfeit goods and food stalls will be banned from main city roads,” Wanlop Suwandee, a chief advisor to Bangkok’s governor, told AFP.

“They will not be allowed for order and hygiene reasons,” he added.

But many Bangkokians say this chaos is part of the capital’s charm and an affordable option for all with a stick of grilled pork going for 10 baht (P15) while a bowl of chicken noodles costing as little as 35 baht (P50).

“If you want to clean out all the vendors it’s like you are cleaning out our culture itself,” said Chiwan Suwannapak, who works for a Bangkok tour agency.

Street dining is also a social leveller in a city cut by inequality, with everyone from business execs to motorcycle taxi drivers pulling up plastic chairs to slurp down spicy soups or dig into fried chicken at the roadside restaurants as cars whiz by.

The rich variety of foods ladled out from push carts are also a top draw for tourists, who power the kingdom’s economy.

“If they go against the vendors, that will that affect business and it will affect the charm of Khaosan,” said Sanga Ruangwattanaku, the president of a business association on Khaosan Road — a buzzing backpacker hotspot in Bangkok’s old town.

Since seizing power in 2014 Thailand’s junta has embarked on a sweeping morality and orderliness campaign.

Critics say an attempt is underway to remodel Bangkok into a Singapore-lite, enforcing regulations that have long been abandoned or skirted around by a rampant culture of bribery and a laid back public used to picking its way through the city’s messy pavements.