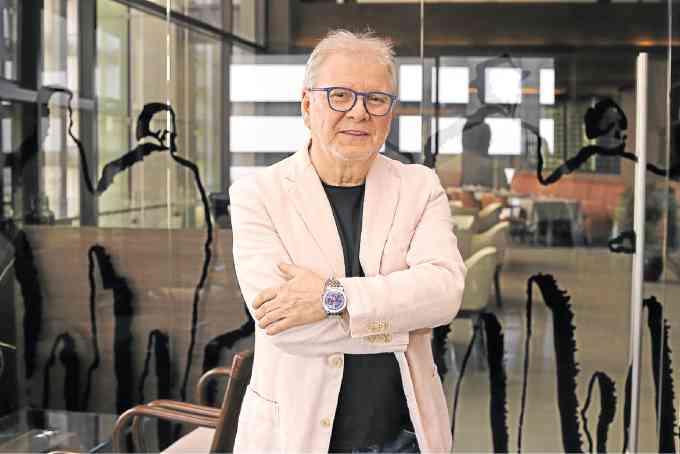 Sure, for his Philippine restaurant, Edi Tekeli would have wanted a chef with a marquee name, and why not? But a rather unfortunate conversation with a celebrity chef soured the idea entirely for the businessman.

Tekeli, Manila’s former fashion mogul, was a regular at Wolfgang Puck’s Spago in Beverly Hills, and he broached the idea of bringing Spago to the Philippines to its celebrity chef-owner.

Tekeli still smarts from the brush-off.

“He said, ‘Why the Philippines? Singapore is the priority. There are better countries,’” he recalls Puck saying. “It hurt me a lot so I walked out. I got very offended because my children are Filipinos, and this is my country, my second home. I found it very arrogant.”

After nine years of living in Los Angeles, Tekeli is making a comeback as a restaurateur in the Philippines, where he lived from 1980 until his move to the United States in 2006 to be with his children.

(In 1991, Tekeli signed with Georges Marciano to be the Philippine licensee of Guess. He also brought in the Spanish fashion brand Mango in 1999. He has since sold both businesses. He also closed his Mango stores in the US in 2009 after the recession. The fashion market is now oversaturated, he says.)

About a month ago, Tekeli and his good friend, Century Properties chair, Ambassador Joey Antonio, opened the doors to Paper Moon, an upscale dining franchise from Milan, on the rooftop of Knightsbridge Residences in Century City, Makati (open daily, 6-11 p.m., tel. 7938630).

Tekeli and Antonio, close friends for over 25 years now, have also partnered for the master franchise of Paper Moon in Asia and Australia.

Months ago, the old friends came to check out the open-air roof deck of Knightsbridge Residences to take photos and take in an unobstructed view of the city’s skyline.

Banking on the success of other rooftop restaurants in major cities abroad, Tekeli has transformed the 65th floor into a chic, 176-seat white-tablecloth restaurant, wrapped all around in panoramic glass, giving diners breathtaking views of the Makati business district.

The 608-square-meter restaurant has dark wood panels and bamboo details, balanced with cool chrome and steel elements. The recessed lighting lends a mellow, romantic mood at night, against the backdrop of the million twinkling lights of the city below and beyond.

There’s a large, private VIP room with a lounge area, and a main bar around the pizza oven by the main dining area, with plush chairs upholstered in shades of cream and coral. At the far end is another bar-lounge with a skylight.

The walls have large black-and-white portraits of stars from old Hollywood.

Paper Moon serves what Tekeli boasts as “the best pizza,” baked in a stone oven from Italy. It’s no empty boast, you realize once you bite into the gloriously crisp, thin crust, topped with the simplest of ingredients: tomato sauce, paper-thin pepperoni slices, caramelized onions and mozzarella. It’s the Pizza Edi.

However, “I could get tired of the pizza, but the tiramisu I could eat every day,” he said.

The bestseller is the pappardelle, the flat, broad noodles all made fresh in-house, like all the other pastas.

Paper Moon—not to be confused with the Japanese dessert place of the same name—is one of Tekeli’s favorite restaurants in his birthplace of Istanbul, and originally comes from Milan where he grew up. (It was also in Milan where the thrice-married, thrice-divorced Tekeli met his now second ex-wife, a Filipino model, and mother of his four children.)

Tekeli’s Paper Moon will soon open in Hong Kong, at Harbour City and in Central. He will also open a second Paper Moon at the BMW showroom in BGC and, later, a steakhouse franchise at the Trump Tower also in Century City.

This quiet afternoon, before the dinner service, Tekeli is dressed exactly as what he, perhaps, imagines how his diners would: in a black tee underneath a pink linen jacket, black jeans and white sneakers. Casual chic, he describes it.

“Please don’t come in your beach outfit, we’re not in Boracay!” he says with a laugh.

But why come back to the Philippines, after all these years?

“This is my home,” he says. “It’s the only place I know by heart. The true friends of mine are here.”