If the ‘titas’ can take on Masungi, so can you | Inquirer Lifestyle ❮ ❯ 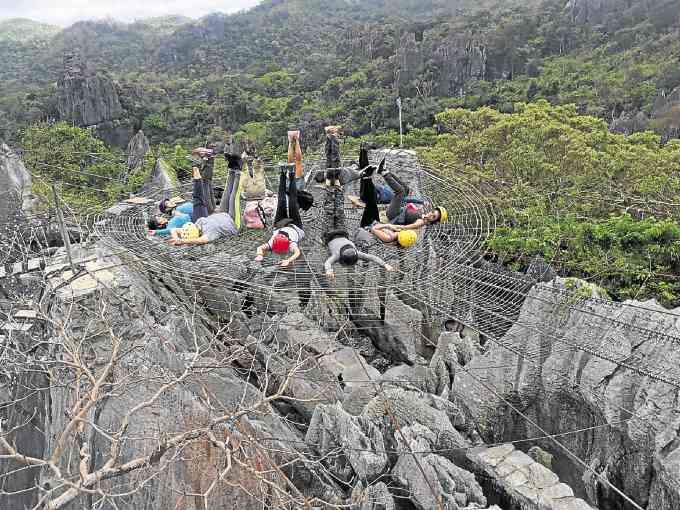 If the ‘titas’ can take on Masungi, so can you

By titas, I mean a group of females, ranging in age from early 40s to mid-60s. That said, as yoga practitioners, we’re not exactly sedentary, and are relatively strong for our age.

It was with this presumed advantage that we decided, one Sunday, to visit the Masungi Georeserve in Baras, Rizal, for a four-hour hike that included steep ups and downs, rope courses and hanging bridges that challenged the acrophobic.

The rewards were spectacular views, fresh air, a sense of accomplishment (yes, the presumed advantage served us well) and a rediscovery of how green and beautiful Rizal province still is.

We had read about Masungi on the net, and on Facebook posts that showed some seemingly daunting trail features, including the Sapot (spider web), a metal wire outlook stretched out above some rocks, and peaks like Ditse, which you could descend only from a rope course several feet above the green treetops.

Baras is pretty close to Metro Manila; from my home in Marikina, it took us only an hour’s easy drive via Marcos Highway to reach Masungi, and the landscape slowly transformed from urban to wonderfully green and beautiful.

It wasn’t a spur-of-the-moment thing, take note; our March weekend reservation had been booked as early as October last year, because the georeserve prudently limits the number of groups entering the area at one time, and weekdays are hardest to book.

As the website reports, the georeserve is owned and protected by “a group of passionate individuals for the environment,” led by Blue Star Construction & Development Corp. and a Masungi Georeserve foundation. The story is that the area used to be a haven for illegal loggers, and was constantly being eyed for mining and quarrying by unscrupulous land-grabbers.

There was even an online campaign to “save Masungi,” and yes, there was a legal battle, but Mother Nature won, confirms Grace, a park ranger who gave the introductory talk upon our arrival.

In the early 2000s, restoration and rehabilitation of the area began, and efforts have paid off beautifully.

Masungi is so green, your eyes sigh in contentment. The place is full of old, tall trees, sinkholes, and dramatic karst limestone cliffs and caves that, according to our guide, park ranger Rheynan, are millions of years old, dating back to the Palaeozoic Era.

The trails have been marked with rocks and stone steps, some wide, but others narrow and steep enough to make some hikers nervous.

Upon reservation last October, with a 50-percent down payment (current rates are P1,500 per person on weekdays, P1,800 on weekends), we received detailed instructions on what to wear—specifically light, comfortable clothing and nonslip closed shoes. We were also advised to bring a liter of water each, as refilling stations (and restrooms) are available only at the beginning and end of the hike.

There are strict rules meant to protect both guests and the environment. Everyone is required to wear a helmet, provided by the georeserve at no extra cost; the place even lends small bags for your water and valuables.

There’s no littering or picking of souvenirs (fine: P3,000), no smoking, and no loud noise so as not to disturb wildlife, which includes lizards, snakes and monkeys. Although we didn’t spot anything big, we did hear a lot of birds.

Minimum age to join the hike is 13; groups must be no smaller than seven people, and no larger than 14. The rangers are experienced enough to divert routes so groups don’t run into each other.

Light refreshments are served either at the beginning or end of the trail; most in our group had skipped breakfast, so we nibbled on bananas and tuna sandwiches before the hike.

And the hike proper? Challenging enough, but loads of fun, and a great way to conquer a fear of heights. The swinging bridges and rope courses are tests of balance, but when you’re relaxed, the views of fauna and the distant Sierra Madre mountains are breathtaking.

The Duyan—a literal large, long hammock with ropes to hang on to, like bus or subway train straps—was delightful, as were the rope courses.

Could you hurt yourself? Certainly, if you’re not careful, get rowdy, or panic, but the rangers are alert to any concerns—Rheynan came running when one of us yelped, bitten on the finger by a small insect—and are in constant communication via radio. A bonus: They know the best angles for photo ops!

If you’re planning a visit this summer, the hike might get too hot by midday, so pick a good time. We were blessed with cloudy skies, cool breezes and a very slight drizzle despite starting at 10:30 a.m.

The best parts for me were knowing my 52-year-old body was still up to the task, and realizing once more how beautiful our country is.

I’m also happy to report that our fit senior ladies did very well, thanks to encouragement and all the rest periods we needed. We finished in less than four hours.

Reserve now, support a laudable local destination and environmental effort, and test your mettle. Oh, and on the way back, we had a late, delicious seafood lunch in Tanay—and ate back all the calories we burned!