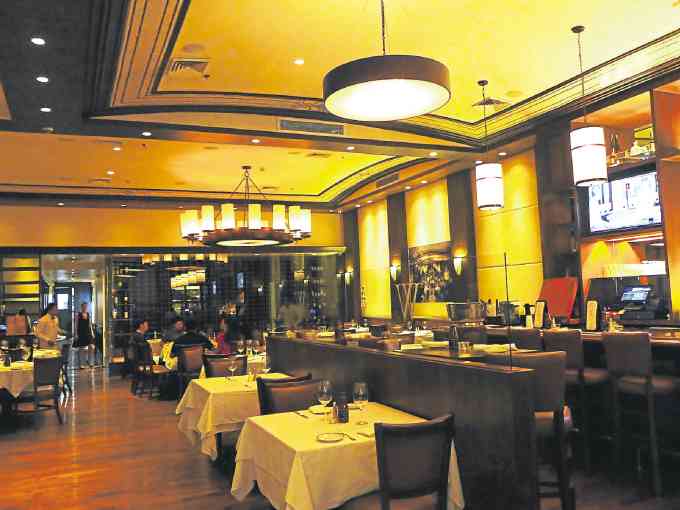 “Exquisite” is a worn-out term in many Western movies, typically used to describe a woman’s beauty, a lavish long gown or a piece of fine jewelry. It’s never or hardly ever associated with food and dining. This is probably the first time it will ever be used describe an evening spent at a restaurant, but we can’t help it; while it is unequivocally filling and fulfilling in the gastronomic sense, dining at Wolfgang’s Steakhouse truly is also an unabashedly exquisite experience.

An air of sophisticated comfort greets you as you enter the vast dining area. Front of house staff is there to make sure that you are comfortably seated. The interiors are plush, opulent and yet cozy; think upholstered leather seats, hardwood floors, mahogany bars and a ceiling laden with Guastavino tile inspired mosaic pattern, all cast in a soft warm glow by chandeliers that are locally sourced replicas of the chandeliers used in the original Park Avenue location.

On weekends, a pianist renders standards on the piano, adding classy appeal of this already charming place.

The Wolfgang’s Steakhouse experience in Manila is designed to mimic—if not exactly replicate—the experience of a customer in New York or in any of its other locations in the United States and in Asia.

“When a guest enters a restaurant, whether it’s here or in the United States, we want that customer to feel, smell and taste New York. Every location is as extension of the original location in Manhattan,” Lydia D’Amato, Wolfgang’s Steakhouse Worldwide VP for restaurant operations, explains.

To ensure that the experience is uniform across all locations, the operations team is consistently hands-on with every restaurant it opens, wherever it may be. It does not offer franchising, but engages in joint ventures with reputable partners, which allows core management to be directly involved starting day one, from the selection of the new location and the screening, hiring and training of new staff; to the opening of the new restaurant and maintaining standards long after the restaurant has opened. Executive kitchen and restaurant staff are flown out for a two-month training in New York. Partners visit the other locations every three months to ensure that everything remains at par with Manhattan standards.

However, it’s not only the posh yet comfortable interiors, fancy ambiance or the first-class service that patrons keep coming back to. More than anything, it’s the food.

Have you ever closed your eyes while eating, fluttered them a bit while chewing ever so slowly, savouring the flavor in every bite?

This is a likely phenomenon at Wolfgang’s Steakhouse. The star of the show—and literally a big deal—is the Porterhouse Steak, an enormous, mouthwatering, 1.5-inch thick delectable monster made of 100 percent USDA prime beef. This is the same USDA prime beef served in New York and Wolfgang’s other locations.

The sourced meat is chilled but not frozen, and flown in to Manila weekly. It is dry aged on site for a period of 28 days, after which it becomes tender with the perfect texture and flavor once cooked inside the infrared broiler. D’Amato explained why it’s 28 days, not 25 or 50.

“At 28 days, the flavor profile is not too strong, and it’s just right that you can try and appreciate the dry-age flavor. For someone who’s just new to the dry-age profile, it’s just the right amount and the tenderness s just right, ” she said.

The controlled humidity and temperature in the aging room and the capability of the infrared broiler to cook at temperatures rising to 1,600 °F ensure that only the best-tasting steaks ever leave the kitchen. For smaller appetites, there is also the Sirloin Steak, Rib Eye Steak and Fillet Mignon.

Sauvignon Cabernet or even a lighter Merlot from Wolfgang’s award-winning wine cellar complements the steak perfectly. The Seafood Platter—an appetizing selection of lobster, prawns and crabs—is best eaten with a flute of white wine.

Bacon lovers will forget the skinny variety with the sinfully delicious and extra thick Sizzling Canadian Bacon slices. Trying to be health conscious? Try the salads.

The Beverly Hills Chopped Salad is a crunchy and refreshing mix of lettuce, carrots, avocado and cucumber, among other vegetables; topped with feta cheese and drizzled with vinaigrette dressing. The Fresh Mozzarella and Tomato salad with pesto dressing looks much simpler but is actually rather tasty.

There are quite a few choices for side dishes, whether you’re in for some carbs or leaning toward veggies. The Lobster Mac & Cheese is a thousand leagues above the usual mac and cheese and you may never eat the store-bought boxed variety again after trying it. Alternately you can have the German Potatoes—caramelized, crusted and cooked three ways: boiled, baked and broiled; or the Creamed Spinach, which is reminiscent of the Bicolano vegetable dish Laing, but without the spiciness and coconut flavor.

The dinner menu of Wolfgang’s Steakhouse in New York is almost exactly the same as every other menu in any other location, except for a couple of items that are added depending on the preferences in the locality.

In the Philippines, Pomelo and Prawn Salad, as well as Salpicao have been added as side dishes and bar chow. The Salpicao in this case is extra special as it is made from USDA prime beef.

A meal as extraordinary warrants a sweet ending. There is a wide variety to choose from: cheesecake, chocolate mousse, key lime pie, pecan pie, tiramisu and apple strudel are available. The cheesecake is a universal favorite but the apple strudel and pecan pie are alternatives worth trying.

Except for the steak, most, if not all ingredients are sourced locally, from the seafood down to the produce. Desserts and bread are baked in house.

To cap the night off, you can order more wine from the cellar; otherwise, the bar offers a large selection to choose from. Cocktail drinkers may opt for any of the specialty cocktails, such as the Apple Cider Margarita or Lemongrass Mojito. Connoisseurs of hard liquor on the other hand might prefer to visit the Whiskey Room, which offers at least 60 kinds of whiskey and cognac. The Whiskey Room also doubles as a cigar room for those in the habit but guests may also request to have their dinner served inside.

The Tribeca and Times Square function rooms can be reserved for large groups or business meetings. Each room can comfortably accommodate 15 guests or combined to house a total of 30. The rooms are well-equipped for audio-visual presentations.

Wolfgang Zwiener opened his first steakhouse on Park Avenue, Manhattan, in 2004. Wolfgang’s Steakhouse has expanded to other locations in the US, Japan, South Korea and the Philippines, and will be opening more at least one more branch in Manila before 2017 ends.

Wolfgang’s Steakhouse in the Philippines is co-owned by Super Sumosam Foods Inc., which is helmed by Raymund Magdaluyo and Marvin Agustin.

The first branch just turned one in February. It continues to satisfy its growing clientele, delivering mouth-watering dishes and with first-class service from Manhattan to the local market.