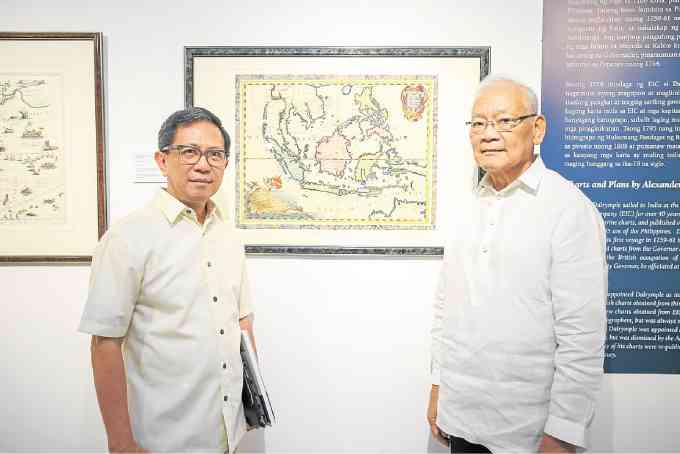 This probably explains the enthusiasm of map collector Jaime Laya as he tours Lifestyle around the current exhibit at the Metropolitan Museum, “Mapping the Philippine Seas.”

As the backgrounder says, it showcases “rare historical maps and charts of the archipelago drawn from the early 16th century to the end of the 19th century.”

Laya showed how these seemingly innocuous records were used not only to trace shorelines and topography, but also to indicate trade routes, cultural practices, early forms of racial profiling, and even the occasional red herring meant to throw off a navigational rival.

Laya also collects rare books, paintings, antiques and all manner of precious tchotchkes (“Name it, I probably have it”).

Laya is part of a handful of quiet but very knowledgeable group of enthusiasts called the Philippine Map Collectors Society (Phimcos) that celebrates the 10th year of its foundation with an exhibit of 165 original maps and sea charts from their own collections, the Government Service Insurance System’s collection, and others in the private sector.

The oldest on display is a map said to be drawn by Italian explorer Antonio Pigafetta, of two oddly-shaped islands called “ZZubu (Cebu?)” and Mattan (Mactan)” that was submitted to the King of Spain when Ferdinand Magellan’s crew returned in 1522 from circumnavigating the globe.

Laya also noted a “fascinating” map done by Sebastian Munster (c. 1540) that “came close to the present count of 7,641 islands”—so the Philippines supposedly has had that number of islands all along.

Laya, a former budget minister, Central Bank governor and education minister, believes that the Europeans must have recorded the names phonetically, the spelling based on how they pronounced their vowels.

There was another that is obviously one of Laya’s favorites, a map detailing an encounter between Spanish and Dutch naval forces in Manila Bay sometime between the 1590s and the 1650s when their countries engaged in the Thirty Years War.

“In the Netherlands’ war for independence, the Dutch brought their war to the East,” said Laya. “They blockaded Manila Bay to jeopardize Spain’s galleon trade. The Dutch ships (drawn on the map) waited for the Spanish ships from Cavite. The Spanish, although outnumbered, defeated the Dutch. It was the victory attributed to Our Lady of La Naval. The devotion to La Naval started in 1646. Interesting that nobody remembers the war.”

He then noted a tiny detail on the map, an exploding volcano drawn near the Cavite coastline.

An inaccuracy, Laya said, because the mariners did not see Taal Volcano acting up miles off the coast.

“A sailor did not see the actual volcano but took note of the smoke,” said Laya. “The eruption was visible from the bay. Had they seen the volcano, they would have noted it was inside a lake and that would have been on the map.”

“There was heavy competition for commercial and colonial supremacy among the Portuguese, Dutch, British and Spaniards in the 16th and 17th centuries,” said Laya. “Maps were valuable secrets and published maps were often drawn to mislead enemies, trade competitors and pirates.”

A “small, nonexistent Isle de S. Joannes” east of Surigao for example, appears on a 1596 map.

“Surveying equipment was the simplest and unintentionally or not, early maps had misplaced, misshapen, missing or fictitious islands,” he said.

Laya was visibly affected by a full-size reproduction of the Selden Map, whose original is on display at the Bodleian Library of Oxford University.

The original hand-drawn map, he said, was said to be produced for a Chinese merchant in the early 1600s and shows China, Japan, Indochina, the Philippines and Indonesia “with mountains and vegetation drawn Chinese-style.”

Thin lines indicated trade routes across the South China Sea and 126 towns all over Luzon were indicated in Chinese characters.

“The map could have been made here because there is a character hua-lang, meaning Spaniards that was (a term) used only by the Manila(-based) Chinese,” said Laya. “However, other terms and motifs used raise Aceh in Sumatra as another possibility.”

It is stories like this that causes the adrenaline rush among Phimcos members led by president Jaime Gonzales.

Former energy secretary and economic development executive Raphael Lotilla, another Phimcos member, happened to walk in during Laya’s tour and quickly noted that European seafarers recorded a Bajo de Masinloc, currently referred to as Scarborough Shoal, when they mapped out Las Islas Filipinas in the 1600s.

Laya turned to a map drawn by Englishman Robert Dudley who recorded a “La Seccagna de Bolinao (the shallows of Bolinao)” on a map drawn while he was in Italy around 1661.

Among those displayed is a Southeast Asia map by Vincenzo Coronelli (c. 1688) that Laya said “delineates maritime boundaries of Isole Filippine… that satisfyingly encompasses (current-day) Scarborough Shoal, the Spratlys and Benham Rise.”

There is also an “extraordinarily rare” 1734 map by Fr. Pedro Murillo-Velarde S.J., that Laya describes as “the most accurate map produced” around 1734 showing major rivers, towns and shallow areas in the South China Sea called “Galit,” “Panacot” and “Lumbay.”

Laya said “‘Panacot’ is Scarborough Shoal, the first reference to which is a label on another map (London, c. 1753), called ‘The Scarborough Capt. Deavergne Struck.’”

(Later, a US Coast and Geodesic Survey map released in 1900 referred to the same as Bajo de Masinloc, which the government now calls Panatag, Laya said.)

Laya also praised the Murillo-Velarde map for including vignettes that depict scenes of urban life with Spanish elite (shaded by an umbrella-bearer), Chinese, Armenians, Indians and Africans engaged in daily routines; rural culture and maps of Guam, Manila, Cavite and Zamboanga.

He also called attention to an “increasingly accurate” map on display at the exhibit’s entrance that was annexed to the 1898 Treaty of Paris “showing the Philippines so accurately as to look as if drawn from a satellite photo.”

Lotilla, a lawyer and known expert on the country’s claim to certain islands in the West Philippine Sea, said he was drawn to collecting maps when he started out as an associate professor at University of the Philippines right after graduation in the mid-1980s.

“Imagine doing this on a public school teacher’s salary?” he said. “At that time, not too many people were interested in the South China Sea. I was teaching international law, constitutional law at UP. In my case, it was the academic interest over national territory and the emergence of the Philippine (claim) that made me look into the maps and the charts.”

Lotilla, director of the UP Institute of International Legal Studies, said that a significant number of maps in his collection of “a hundred or so” were helpful in “putting together documents on the national territory.”

Laya started with a map bought for $10 from a street vendor in Florence, Italy.

“It was a Venetian map dated 1718 (by Venetian printer and map publisher Antonio) Zatta,” he said. “I asked the vendor in Spanish whether he had a map of the Philippines—the first map I got in 1966.” Thus began his lifelong passion for map collecting.

Apart from serving as snapshots of the economics and politics of a particular period, ancient maps are also art items, Laya said.

Older maps, he noted, have “decorative compass roses and allegorical figures like mermaids and sea monsters, saints and cherubs, flora and fauna, natives and their boats.”

A small Murillo-Velarde map has San Francisco Javier “on a seashell pulled by sea horses. He was thought to have visited the Philippines and is shown holding a cross that he had lost at sea and that was retrieved by a large crab,” Laya said.

At one point, Lotilla who was listening in on the conversation, exclaimed that a map by Zatta such as what Laya has now costs already $2,000.

“Mapping the Philippine Seas” runs at the Metropolitan Museum until April 29. Museum is open Monday to Saturday, 10 a.m. to 5:30 p.m.