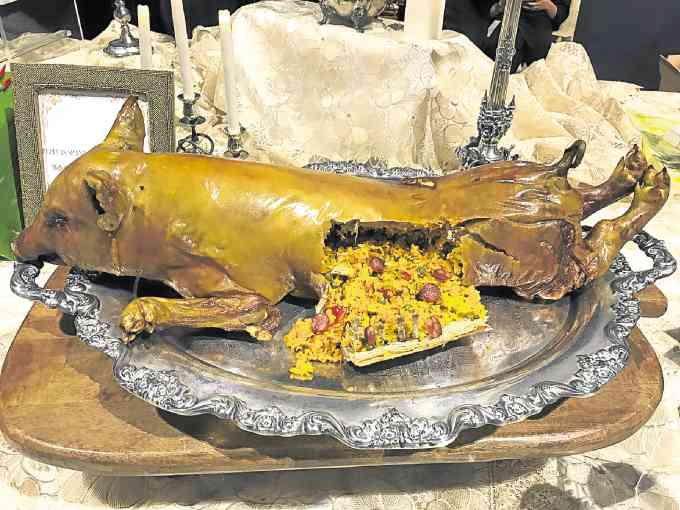 Just when you thought it was safe to open the Lifestyle pages, surprise! Here’s another article on Madrid Fusion Manila, the annual confab of chefs, restaurateurs, food journalists and industry members, now on the third year of its five-year license to use the trademark in Manila.

It started in the previous administration, and there had been doubts as to whether or not it would continue under the present one. Among the biggest happy surprises at the end was a commitment by Tourism Secretary Wanda Teo to continue it next year.

The Department of Agriculture, which collaborates with Madrid Fusion Manila, according to Undersecretary Berna Romulo Puyat, will continue to support the event for as long as it runs.

Memories of the hectic but fun-filled three days are beginning to melt like sorbet in the summer heat, but the highlights of the event for chefs and journalists were the regional lunches, where one got to eat the food—while talking about it.

These were, again, collaborative, with the DOT occupying the center of the hall, while the Agriculture department had booths lining the perimeter. While the DOT followed the themes of Luzon, Visayas and Mindanao for three days, Agriculture got to be a little more playful, with lunches revolving around rice, nose-to-tail eating, and corn.

The curators for each day, chosen way in advance, chose the restaurants and chefs, who then chose the dishes.

To a restaurant critic, the Agriculture lunches were a snapshot of the food industry. A lot of it was incidental: who was busy, who was out of the country, who just opened a restaurant.

I’ll pick out a few of my favorites, not to annoy readers who weren’t able to go, but to encourage these chefs to make the dishes available to the public.

Sly Samonte’s dirty horchata is made from brewed rice with coffee, but you’ll have to go to La Union to try his creations, which sounds like a good excuse for a trip, if you ask me.

Rocking the desserts on nose-to-tail day were Pamela Lim Cinco’s (Risa Chocolates) speedball of a cocktail with a sphere made from various parts of the cacao tree, and Hiraya Bakery’s tres leches cakes with sampinit, wild local raspberries. Francis Lim of Tipple and Slaw had a fairly amazing goat terrine, which tasted a lot better than it sounds.

There have been a few dissenting notes about the importance or relevance of Madrid Fusion, which deserve to be addressed rather than dismissed as sour-graping on the part of chefs or journalists who didn’t receive an invite.

The main criticism seemed to be that the government was using taxpayers’ money just for the restaurant industry insiders to be able to pat each other on the back and talk about lofty and arcane gastronomic ideas—while children starved on the streets.

It is important to note that Madrid Fusion Manila is not an exclusive event. It is open to the public: Everyone can sign up, buy a ticket and go. Even Mon Jimenez (former Tourism secretary, who started Madrid Fusion) paid for his own ticket.

As for the delegates from the hospitality industry, there was a good representation of students and young chefs just starting out in their careers. For a hypothetical line chef at, say, Pancake House who is serious about his job, seeing colleagues who are at the top of their profession could spell the difference between treating the work as a way to make ends meet, or having the passion to climb the ladder—either here or abroad—to become extraordinary.

One of the most amazing things about the food world is that its true superstars are not trust-fund impresarios or those with connections, but cooks who have steadily climbed the rungs of the kitchen ladder until they became good enough to attract investors of their own.

Now, more than ever, people are willing to travel for food. Seeing cherry blossoms or doing the obligatory visit to the cathedral or historical site is optional; the restaurant list (often booked months or even years in advance) is not.

People will apply for visas and fly to obscure countries simply because the food there is terrific, or because there is a single amazing restaurant there that is worth the journey.

This, in addition to the GDP that the local restaurant industry generates, is worth spending government money on. We haven’t even begun to mention the less tangible benefits, such as the continuing awareness on sustainability (the theme for this year’s conference), or being able to highlight lesser-known products, or to give farmers and fishermen the chance to showcase their stuff.

If this is not worth the government shouldering some of the cost, in partnership with private corporate sponsors, then I don’t know what is.

The Philippines is much more than roads and flyovers and bridges and crime statistics; it’s also the varieties of rice we don’t get to use, or the ancient and time-honored way that an Ivatan fisherman breaks down a fish.

If you remain unconvinced, head down to SMX convention center around this time next year. You’ll eat well at the regional lunches, will hopefully catch a few talks that are of interest, and will also see an unparalleled camaraderie and dedication among local chefs and restaurateurs who believe, against all odds, in Filipino food—in what it is, and in what it can be. —CONTRIBUTED