Our man in Malaysia is a seasoned diplomat who survived Tiananmen, the Bangkok bombings | Inquirer Lifestyle 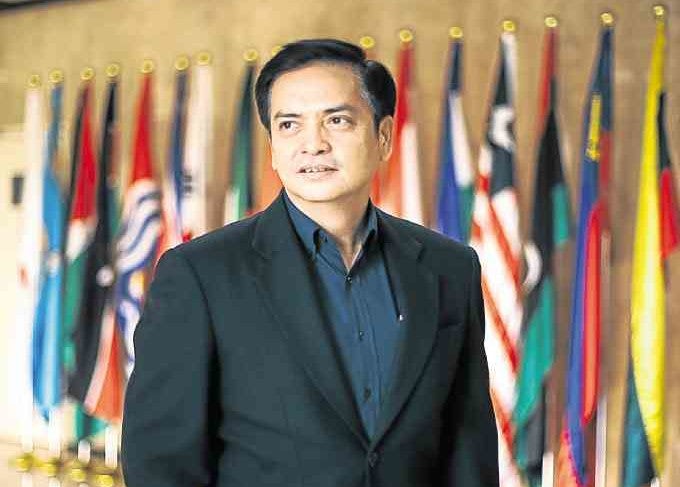 Our man in Malaysia is a seasoned diplomat who survived Tiananmen, the Bangkok bombings

Crowded at the back of the room is a pack of cameramen, their lenses aimed at the DFA spokesperson who has taken his place behind the podium, ready to begin just another one of the many media briefings he has conducted since assuming the position in March 2014.

Charles José answers each question hurled at him with the ease and resoluteness of someone who was born to be a spokesperson. Yet AsSec CJ, as we fondly call him in the office, admits that he never dreamt, in this lifetime, that he would ever be called to serve as the DFA spokesperson.

“I’m a very quiet guy. Maybe it doesn’t suit my personality. But, as it turns out, maybe it even worked to my advantage,” AsSec CJ says, recalling the day he answered a phone call from Manila telling him that he was to be the DFA’s next spokesperson. At the time, he was consul general of the Philippine Consulate General in Shanghai.

AsSec CJ is the quintessential introvert who relishes reading anything, from news magazines to Tom Clancy novels. He ends his day with a quiet dinner at home with his wife and two daughters. On weekends, he enjoys a good game of lawn tennis with close friends. When others are busy being social butterflies, AsSec CJ is mostly quiet, or enjoying a meaningful conversation with one or two people.

“Being a spokesperson doesn’t mean you have to be talkative,” he says. “First of all, you have to be very careful so you can really weigh your words before speaking.”

This year, AsSec CJ will close his three-year stint as DFA spokesperson as he prepares to serve as Philippine ambassador to Malaysia. The past three years have not been a walk in the park, though, for the diplomat whose career spans nearly three decades.

He has weathered some of the most exciting times: the escalation of the West Philippine Sea issue; the Philippines’ triumph in The Hague’s arbitral tribunal ruling; the Mary Jane Veloso case in Indonesia; the Jakatia Pawa execution in Kuwait; the Philippines’ hosting of Apec 2015 and chairmanship of Asean 2017; three Secretaries of Foreign Affairs; a change of administration; and many more.

People would think AsSec CJ had prepared his whole life for a career in foreign service. Well, while his grade school classmates dreamt of becoming doctors, teachers, bankers and engineers, AsSec CJ was sure that he wanted to become a diplomat.

“If you will look at my grade six yearbook,” he says, “below our name was a statement of what we would like to be when we grow up. When I was in grade six, I wrote that I wanted to be in the foreign service.”

From a very young age, AsSec CJ rigorously trained to read, write and speak Mandarin. His father sent him to study at St. Jude’s Catholic School, a Chinese-Filipino school that his father’s friends recommended, because fluency in Mandarin would take him far, should he decide to become a businessman.

After earning a degree in Economics at the University of the Philippines-Diliman, he went to law school for a year before passing the Foreign Service Officers Exam, touted as one of the most difficult government examinations in the Philippines.

Thirty years and around six tours of duty later, AsSec Charles now admits that life in the foreign service has been more than what he expected.

To say that his first foreign assignment as the third secretary and vice consul of the Philippine Embassy in Beijing was a baptism of fire is an understatement. He was 26 years old at the time, when the image of a man standing defiantly before the tanks at Tiananmen Square in the spring of 1989 was taken.

“I was in Beijing during the Tiananmen Incident. That was a big challenge because we had to look after the welfare of the Filipino community and at the same time, our families.

“Although the Filipino community in Beijing was very small then, I think the threat was very clear and very present. It was frightening because there was a news blackout, so we did not know what was going on inside Beijing.”

He recalls how thousands of troops rumbled along the street outside the Philippine Chancery. As the protests and demonstrations grew more violent, several Filipinos, including the families of embassy personnel, needed to be evacuated for their own safety.
“My wife and I were newly married when all that happened,” he points out. “It was only my wife and I who were in Beijing, so she had to be evacuated while I stayed behind.”

His second foreign posting posed yet another challenge for AsSec CJ, who juggled fatherhood with his responsibilities as the First Secretary at the Philippine Embassy in Singapore. It was 2003, the outbreak of the SARS (severe acute respiratory syndrome) epidemic.

On his third tour of duty as the minister and consul general of the Philippine Embassy in Bangkok, AsSec CJ found himself once more in the midst of action when a political crisis rocked the Thai capital.

“At that time, I was in Chiang Mai, which was 10 hours away from Bangkok, so we had to round up all the Filipino tourists trapped in Bangkok and bring them to Northern Thailand so they could safely return to the Philippines,” he narrates. “We had to travel back and forth for 10 hours each day.”

AsSec CJ admits that maintaining a keen sense of work-life balance, coupled with the unwavering support of his wife, Maria Victoria Hizon-Jose, have been instrumental in his enduring career in the DFA.

“My wife gave up her own career to join me in my different assignments,” he says. “She looks after the family, and this brings me peace of mind, knowing that everything is well at home.”

With the official start of his new post as the Philippine ambassador to Malaysia drawing closer, AsSec CJ says he feels neither jitters nor any pressure. In fact, he looks forward to yet another challenge in his career.

“I haven’t started my work yet, but assuming that I’ll be successful in my work as ambassador to Malaysia, I’d like to be remembered as somebody who did his best to help the country,” he says.

“I’d like to bring honor and pride to the Filipino people. We can only do our best, given the different challenges that we will be facing. We cannot promise anything but to try our best,” he adds.—CONTRIBUTED