‘James Bond should be wearing this watch’ | Inquirer Lifestyle 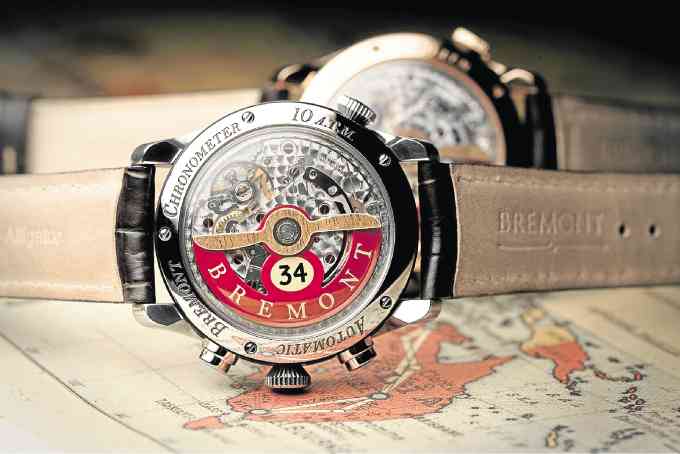 The backside of the DH-88 watch contains a sliver of wood from the undercarriage of the plane created by Jeffrey de Havilland that made the trailblazing flight from London to Melbourne in 1934.

‘James Bond should be wearing this watch’

Bremont chronometers are not trendy timepieces that wimpy guys wear at membership clubs. These unabashedly masculine watches stare back and demand a torture test.

“James Bond really should be wearing our watch,” said Giles English, one half of the British brothers who developed the hardy wristwatches launched in 2007.

It was a common love for flying, engineering and aviation watches that inspired Giles and brother Nick to create the hardy units. But first, the backstory.

Their father Euan, who was an aeronautical engineer, and Nick had an accident with their 1942 WWII Harvard aircraft while practicing for an air exhibition in March 1995. Euan died, Nick survived with more than 30 broken bones. Six months later, Nick was airborne again, while being flown by Giles.

In the late 1990s, the 1930s biplane the English brothers were flying was forced to make an emergency landing in a field in France. The farmer who helped them turned out to be another aviation fan and also a gifted engineer. The barn where the brothers spent the night had half-restored clocks and engine parts strewn everywhere. Before taking off anew, the duo vowed to honor the farmer’s hospitality.

Back in England, the brothers eventually developed a business restoring and maintaining historic aircraft. They later set a small workshop in Biel-Bienne, Switzerland. The next step after aircraft, mechanical devices and engineering was aviation watches.
As they had promised, the English brothers paid homage to the hospitable farmer—Antoine Bremont.

Giles was obviously proud of his babies, handling each watch like a rare stone during an exclusive presentation arranged by Lucerne Luxe, the country’s purveyor of luxury watches.

“People think watches are always Swiss-made. But at the turn of the 20th century, Britain was making half of the world’s watches. Note that the world sets time by Greenwich Mean Time, not Geneva Mean Time,” Giles said.

The first Bremont watches took years to develop and distribute. The brand is now the 12th largest chronometer producer in the world. The aviation theme is very evident in most of the designs.

Giles said a Bremont is “79 times harder than the average steel watch. It doesn’t scratch or dent. It is worn by adventurers and climbers.”

Militaries all over the world eventually noticed. Around 25 percent of Bremont’s current production is for troops around the world.

Unlike luxury watch brands that create designs around personalities or trends, Bremont focuses on the bromance of adventure, aviation history and engineering.

Giles showed off a Bremont U2 watch similar to something he wore when he crashed his plane and broke his back three years ago. Martin Baker, a company that creates ejection seats in planes, commissioned a Bremont design with an exclusive red barrel that it gives out to passengers who survived seat ejections from aircraft.

Only 7,500 lucky souls around the world have these watches. They are not for sale, although Giles learned that collectors are willing to pay the equivalent of P2 million for one.

A few years ago, Bremont released another limited edition-design called Wright Flyer that contains a sliver of cloth from the cotton covering used on the first aircraft flown by Orville and Wilbur Wright.

A more recent design, the DH88, contains a tiny piece of the wood from the undercarriage of the aircraft created by Jeffrey de Havilland that flew 115 days at sea from London to Melbourne in 1934—a feat that revolutionized air travel.

The Bremont cocreator said the brand had no need for a person or character as peg for the designs. The brothers would rather keep in mind “a very adventurous man” who “wants to be a little different, wants something more exclusive, would buy something that would hold its value.”

“It’s very easy to chase trends or make a watch that appeals to everyone. What happens is that it doesn’t appeal to anyone because you’re trying to appeal to everyone. I see it with some big brands. They have so many watches; what does the brand actually stand for? We create what we like and hope other people would like it. This is far more focused,” Giles explained.

“You can buy a nice car, but in three years it would be worthless, but a watch that still works in 200 years and tells time—there are very few things you can buy now that will still do that later,” he said.