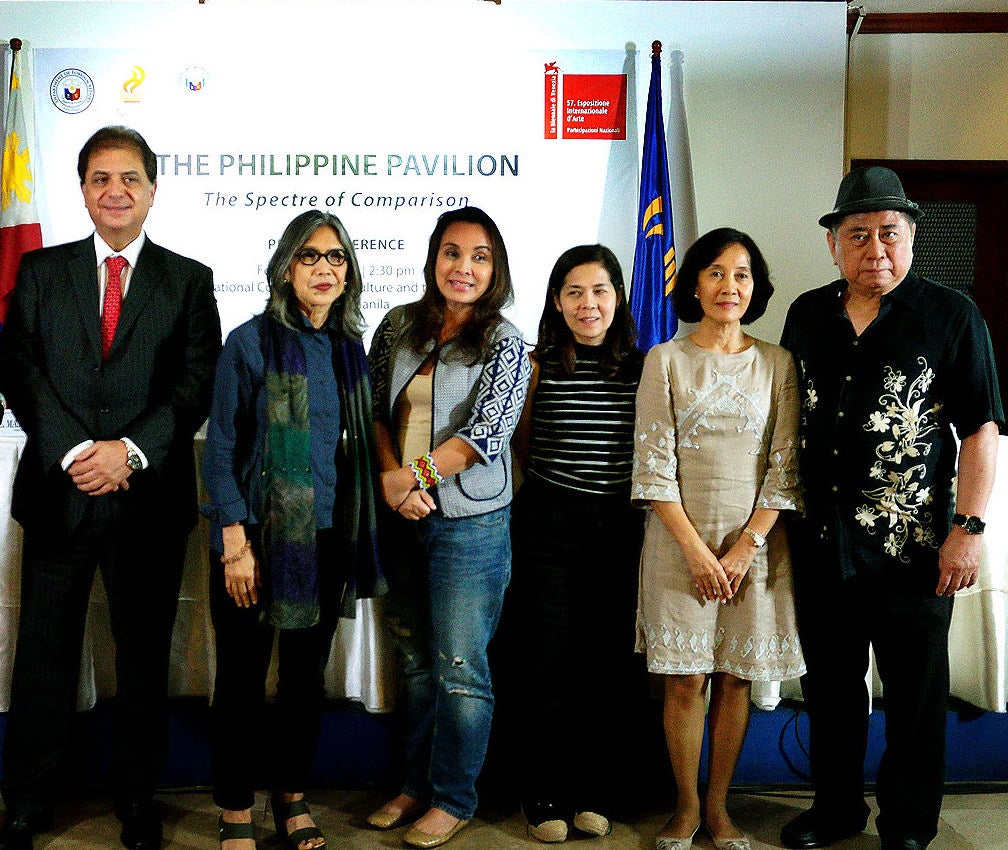 The world of contemporary art will unveil to the public its newest array of artistic work this week at the “2017 Venice Art Biennale” in Italy, with two internationally-acclaimed Filipino artists Lani Maestro and Manuel Ocampo making doubly sure that the Philippines is amply represented.

Senator Loren Legarda, the visionary and prime mover of the country’s return to the global art exhibition in 2015, after a 51-year hiatus, said that Filipino voices were “amplified with each participation at the Venice Biennale.”

In an interview, Legarda said she was “very proud” that the Philippines would be part of the Venice Biennale for the third year in a row.

“Our realities and moments as a nation unfold with each exhibit. The world gets to hear what the country and our people have to say. We also have the privilege to listen to other nations, their discourse and their concerns. Now that we are in the Arsenale, the Filipino voice is further amplified,” said Legarda.

Legarda is the National Commission for Culture and the Arts (NCCA) “Dangal ng Haraya” awardee for 2016 for being the champion of arts and culture in government.

It will be the first time that the Philippine pavilion will be housed at the Arsenale, the main exhibition venue of the biennial affair that gathers together the best contemporary artists, art patrons and enthusiasts, and cultural workers around the world.

La Biennale, which started in 1895, is “now one of the most famous and prestigious cultural organizations in the world,” according to its official website: http://www.labiennale.org/en/biennale/organization/

It says La Biennale—called as such because it is held biennialy—“stands at the forefront of research and promotion of new contemporary art trends, organizes exhibitions and research in all its specific sectors.”

Legarda said she had always envisioned the Philippines to engage in the global art conversation.

“Filipinos are talented and we have rich history that has produced a very layered storyline for our country,” said Legarda, adding:

“Our successful return to the Venice Biennale even after a long absence is proof that we always had our place in the world, we never lost it; we only have to be brave enough to seize it.”

Led by curator Joselina Cruz, the Philippine exhibit at the 57th International Exhibition of La Biennale di Venezia titled, “The Spectre of Comparison,” features the works of Maestro and Ocampo.

The Spectre (or specter) of Comparison will have its vernissage—a private viewing preceding the public exhibition—on May 11 at the Arsenale in Venice. It will be viewed by the public from May 13 through November 26, 2017.

The Spectre of Comparison was chosen among 12 curatorial proposals submitted to the Philippine Arts in Venice Biennale Coordinating Committee in August 2016.

The jury was composed of Dr. Eugene Tan, Director of the National Gallery Singapore; Florentina P. Colayco, President of Metropolitan Museum of Manila; Luis “Junyee” E. Yee, Jr., a pioneer of installation art in the Philippines; then NCCA Chair Felipe de Leon Jr.; and Legarda, principal advocate of the project.

The impulse and framework for the exhibition was drawn from Jose Rizal‘s Noli Me Tangere, according to a statement released by Legarda’s Office.

The statement quoted Cruz as saying that the phrase, “Spectre of Comparison, encapsulates the experience of Rizal’s protagonist, Crisostomo Ibarra, when he gazes out at the botanical gardens of Manila and simultaneously sees the gardens of Europe.”

“This point of realization suggests the loss of Ibarra’s (and Rizal’s) political innocence, this double vision of experiencing events up close and from afar: no longer able to see the Philippines without seeing Europe nor gaze at Europe without seeing the Philippines,” Cruz, the curator, explained.

With this as “spectral pivot,” Maestro’s and Ocampo’s practices as artists, “aesthetically worlds apart from each other and produced through a multiplicity of contexts, are brought together in Venice,” said the statement.

Although Maestro and Ocampo have lived and practiced their craft outside the Philippines, they have maintained active engagement with the country throughout their careers.

“Their practice and their subject matters are deeply involved with their experiences as immigrants or citizens of a new diaspora that also reflect the complexity of a contemporary Philippine identity,” the statement said, adding:

“The exhibition looks at their practices as emblematic of the experience of Rizal’s specter of comparisons, the juxtaposition of their works, the manifestation of political and social commentary from afar, as they saw the events of the Philippines and their adopted countries ‘through an inverted telescope’,” said Cruz.

A briefer provided by Legarda’s Office and the NCCA recalled that the first participation of the Philippines in the Venice Biennale was in 1964 at the 32nd Venice Art Biennale.

The country’s first pavilion presented the works of Jose Joya, painter and multimedia artist, and Napoleon Abueva, sculptor, both of whom are now national artists.

After 51 years, the country re-entered the global art exposition with the exhibit “Tie A String Around The World” curated by Dr. Patrick Flores in the 2015 Venice Art Biennale. It gained critical acclaim.

It featured the film, “Genghis Khan,” by the late national artists Manuel Conde and Carlos Francisco, multi-channel video, “A Dashed State,” by Manny Montelibano, and the installation, “Shoal,” by Jose Tence Ruiz.

Both the 2015 and 2016 pavilions were mounted only in the 18th-century building Palazzo Mora.

Besides Legarda and the NCCA, the Departments of Foreign Affairs and Tourism have collaborated to mount the Philippine pavilion this year.

Legarda said that as art was “continuously evolving and to further promote Philippine art, the country aimed to have a place among the other national pavilions. This year, the Philippine Pavilion is in the Arsenale, the historic exhibition space of the Venice Biennale art platform.”