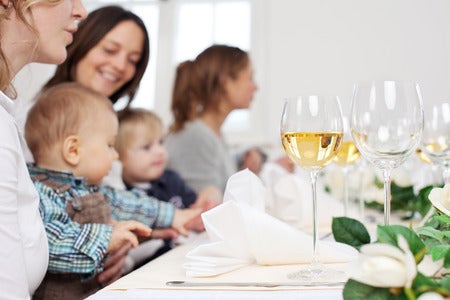 Should restaurants be allowed to ban children?

When I was going out with the girl who would become my wife, I took her to one of my favorite restaurants in Paris, also the oldest: a three-Michelin-star former café at the Palais Royal where Victor Hugo and Jean-Paul Sartre used to hang out (though not together, because the former died in 1885).

By any standards, it was a marathon of a meal. It took us from 7 p.m. to one the next morning. While we ate, a cherubic little French baby lay gurgling in a basket, occasionally reaching out for a bottle of milk or to glance over at us with big blue eyes.

We dreamed of a future in which we would take our children to haute cuisine temples and teach them early on the wonders of langoustine ravioli with truffles.

In consideration of others

In hindsight, the baby had obviously been drugged, or was a stage prop of some sort. I cannot imagine any youngster who will sit through a five-hour meal without making any noise whatsoever.

Sometimes five minutes is a challenge. Once, when our toddler sat down in a restaurant and hurled the cutlery methodically across the room while wailing like a police siren, we hurriedly exited and I patted a P100 bill into the maître d’s palm.

We’ve had to take a crying child out of more restaurants than I care to admit.

Should restaurants be allowed to ban children? It’s perfectly within their right to do so, but as with so many things in the modern world, it should be a matter of etiquette, rather than having to be spelled out explicitly. “No Children” reminds us too closely of “No Blacks,” or, closer to our history, “No Dogs or Filipinos” admonitions from less than
a century ago.

If you don’t think your child will last the length of a fine dining experience without howling, erupting into a tantrum or breaking things, he or she should stay home, whether he is four or 14.
This is for your own sanity as well as in consideration
of other diners.

It’s outside of fine dining that things get more interesting. Many restaurants actively woo children because parents have to eat out, too. Even if most of our earnings are supposed to go to diapers and the rest directed towards their college fund, there are nights when we’d really like to eat out with the children, without going through the rigmarole of arranging a babysitter.

But this doesn’t necessarily mean we want to go to a “family” restaurant, with its forced jollity, the paraphernalia of fun, the overfamiliar servers, the half-priced burgers, the abundance of all things fried and dipped in ketchup and margaritas for the adults to wash away, even for a brief moment, the anguish of parenthood.

Going only to restaurants that are designed for families with children and which serve childish food with a few concessions to adults who eat like children, is a disservice to both our taste buds and that
of our children.

Here’s where we’re lucky: the Philippines is one of the most indulgent places in the world when it comes to eating out with children. You probably shouldn’t take children to M Dining or Nobu—but they would probably do their best to accommodate you. I love taking my children to Yabu despite the tiny tables crammed full of things that are tall, thin and breakable.

All about the sugar

I’m not of the school of thought that believes children’s palates should be developed by feeding babies spoonfuls of caviar. Before the age of four, a child will appreciate a Pierre Herme macaron about as much as much as a Hershey’s kiss or a piaya—it’s all about the sugar at this stage.

You can feed them anything from balut to fried tarantulas as long as they see you eating it. They have no natural aversions to what something is, only to tastes such as bitterness or extreme acidity,
or smells such as rotting fish
or rice.

In that sense, the pre and early toddler years are a joy for food adventures because they’ll take equally well to protein from eggs to brains, without distinguishing one from the other (although even the French authorities caution against feeding babies cheese made from raw milk, especially from “artisanal” producers who live in a shack in the woods without electricity, etc.).

In every other sense, feeding children at that age is a nightmare because you need a wide splatter area. One baby book even advised putting a shower curtain on the floor around the young one, which seemed sound enough advice; it then goes on to advocate scraping the food off the shower curtain and continue feeding it to the baby—alarming, even if theoretically sensible.

Casual, outdoor restaurants where children can run around without knocking over the Schott Zwiesel are also a godsend—like Harbor View or a nice poolside club restaurant.

In the debate regarding children in fine-dining restaurants, I come firmly down on the side of “no.” But I would shift the responsibility to parents rather than to the establishment. For those times when the babysitter simply isn’t available, I am so sorry
in advance.

And to the restaurants who continue to put up with us (you know who you are), a big thank you from us and all the other harassed parents. Sorry for the mess. —CONTRIBUTED