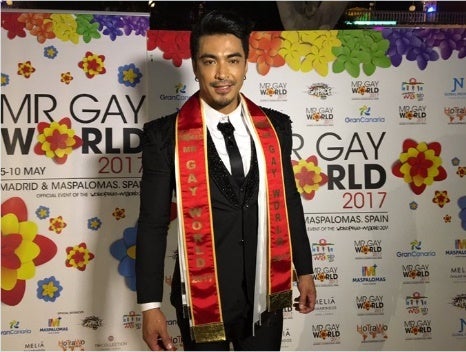 The Philippines’ bet John Raspado won the title of Mr. Gay World 2017 held in Spain on Thursday morning, the first victory for the country in the pageant’s history.

In 2014, Raspado won the “I Am Pogay” contest of ABS-CBN noontime show “It’s Showtime.”

Raspado took to the Mr. Gay World Philippines Facebook page to thank the people behind his victory.

(Thank you so much to the people who make up the MGWPO, especially to Wilbert Tolentino, for his guidance in my journey to victory and to those who helped me backstage and to the other contestants. Especially to Belgium and Venezuela, my roommates.)

(To the Filipino community in Spain, to loveyourself.org, to Kagandahang Flores. This win is not only for my family but also to gays like me who have principles and goals. Thank you, God!)  YG/JE