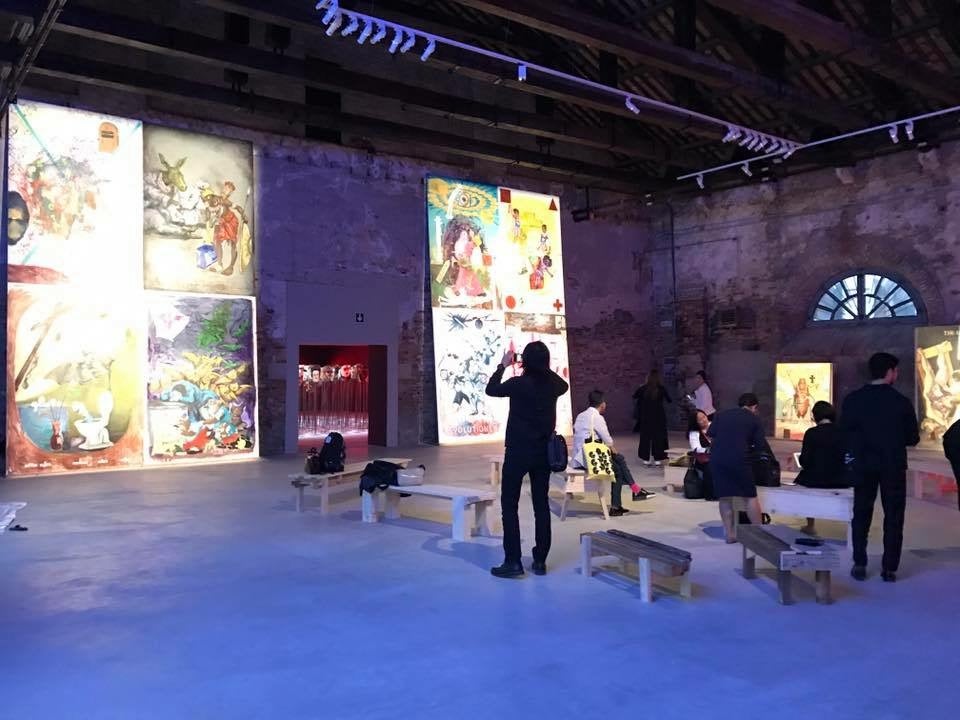 VENICE – “The Spectre of Comparison,” a thought-provoking collaboration of contemporary artists Manuel Ocampo and Lani Maestro, was unveiled today (May 11) at the 57thInternational Art Exhibition of La Biennale di Venezia.

At the “Biennale Arte 2017” (2017 Art Biennale), the oldest and most prestigious platform for contemporary art trends in the world, the Spectre (or specter) of Comparison ensures that the country’s return to the center stage of the art world in 2015 – after a 51-year hiatus – is not a shortlived affair.

Joselina Cruz curates the Philippine pavilion for 2017 to showcase the artistic works of Ocampo and Maestro, who have lived and practiced outside the Philippines but maintained ties with the country of their birth throughout their careers.

Cruz said that the Spectre of Comparison was drawn from Jose Rizal’s novel, Noli Me Tángere.

“The phrase encapsulates the experience of Rizal’s protagonist, Crisostomo Ibarra, when he gazes out at the botanical gardens of Manila and simultaneously sees the gardens of Europe,” said Cruz. 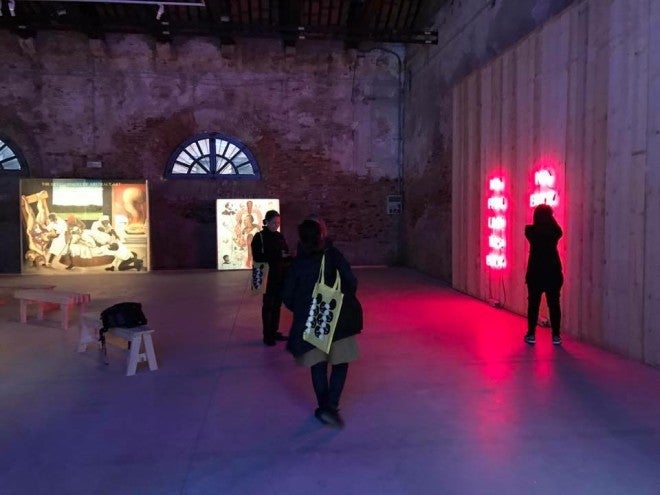 This is only the third time that the country is engaging the world through art at the La Biennale di Venezia since its inception in 1895.

Cruz, Maestro and Ocampo met select members of the Philippine media at 4 p.m. (Manila time) on May 11 for a press briefing before the 10 p.m. vernissage – a private viewing preceding the public exhibition – at the Arsenale, the main exhibition venue of Art Biennale.

About 86 nations have put up their own exhibitions, which will be open to the public from May 13 through November 26, 2017. Collateral events and special projects like dance, theater, cinema and musical performances will be staged, as well, throughout the exhibition.

The private viewing on May 11 allowed a select group of Filipino artists and cultural workers, members of the media, and government officials to see firsthand the collaboration of Maestro and Ocampo. 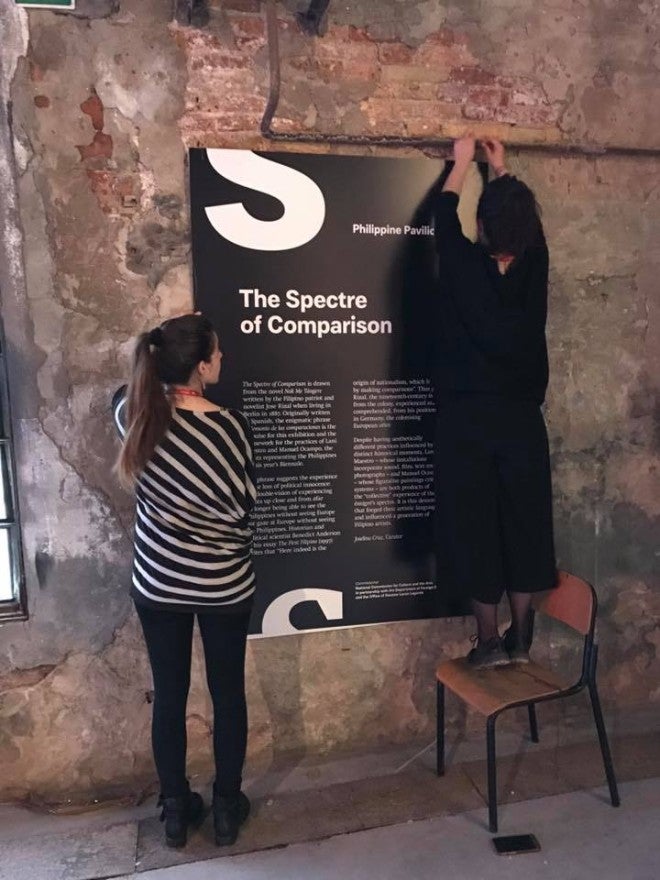 The Philippine participation at the Art Biennale is a joint undertaking of Legarda’s Office, NCCA, and Departments of Tourism and Foreign Affairs.

In an interview before the vernissage, National Commission for Culture and the Arts (NCCA) chair Virgilio Almario noted that having an exhibition space at the Art Biennale was no mean feat.

Almario credited Sen. Loren Legarda for the herculian task of bringing the country back to the center of the art world. 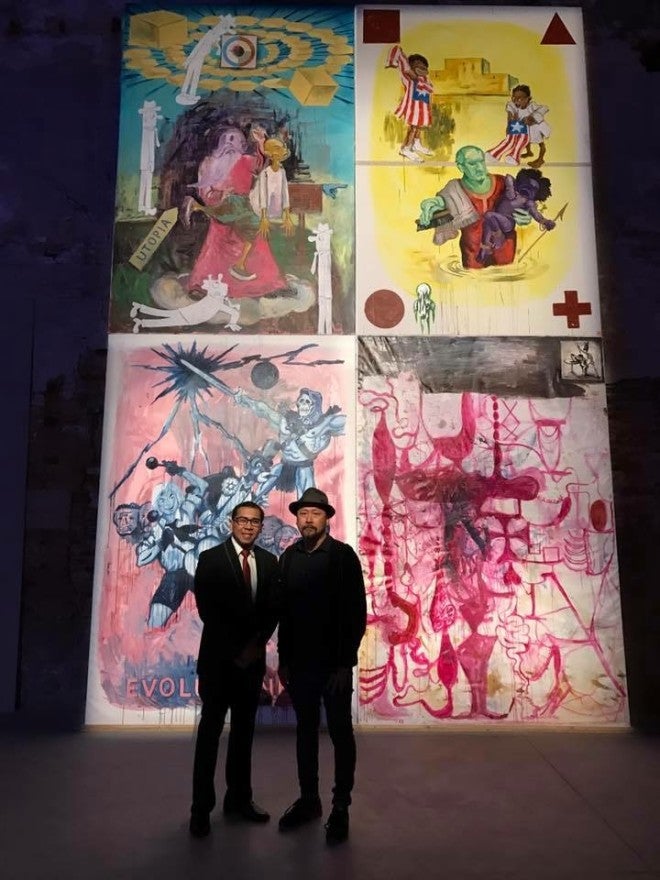 “Without the tenacity of the senator, this would not have happened,” he said of Legarda, the  visionary and prime mover of the country’s return to the global art exhibition.

The first participation of the Philippines in the Biennale was in 1964 at the 32nd Venice Art Biennale.

The country’s first pavilion presented the works of Jose Joya, painter and multimedia artist, and Napoleon Abueva, sculptor, both of whom are now national artists.

51 years after, the country re-entered the global art exposition with the exhibit “Tie A String Around The World” curated by Dr. Patrick Flores in the 2015 Venice Art Biennale. It gained critical acclaim.

It featured the film, “Genghis Khan,” by the late national artists Manuel Conde and Carlos Francisco, multi-channel video, “A Dashed State,” by Manny Montelibano, and the installation, “Shoal,” by Jose Tence Ruiz. 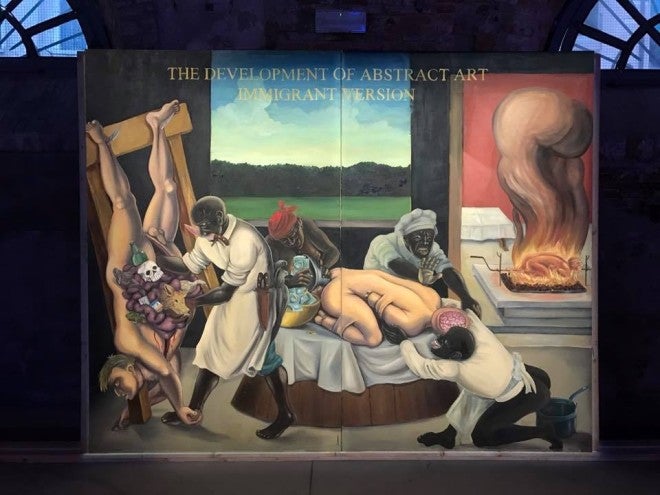 “We cannot help it. The colonial experience is really a major portion of our consciousness,” said Almario, when asked about the focus of the artists on the rather difficult issues about colonization, migration, national identity, and individual and collective freedoms.

In a Skype interview from Manila, Legarda said the Spectre of Comparison “examines the Filipino identity.”  Legarda had canceled her attendance at the opening of the Philippine pavilion due to an emergency eye laser procedure last week.

According to her,  the centuries of colonial rule and the decades of continuing diaspora have shaped the Filipino identity—a point of discussion in the Spectre of Comparison.

“This exhibition questions the processes with which our identity as a nation has been formed, our curious condition as an archipelago of varied languages and ethnicities brought together by this modern construct; that these processes occurred in the context of hundreds of years of colonialism and occupation is not insignificant,” Legarda explained. 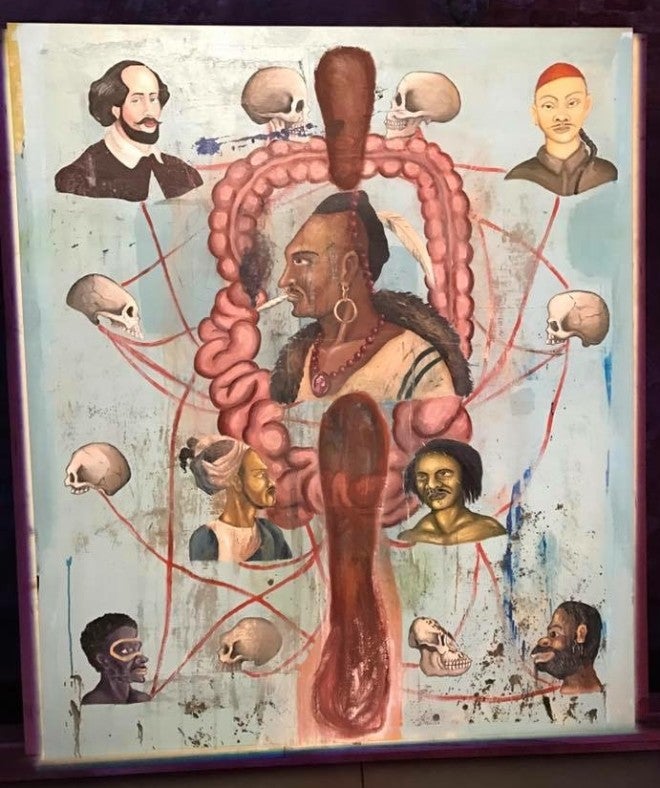 Said Legarda: “The Spectre of Comparison ensures it is impossible for us to comprehend who we are without the painful hauntings of our history. This was the case for Crisostomo Ibarra, for Rizal, and I am sure for Lani Maestro and Manuel Ocampo. These artists are all immigrants, as so many Filipinos are or have been: the West exists as both perpetrator and refuge; the Philippines as the home suddenly ripe for critique.”

According to her, the artists’ practice and their subject matters are deeply involved with their experiences as immigrants or citizens of a new diaspora that also reflect the complexity of a contemporary Philippine identity.

“The power of art to widen the imagination and sphere of possibilities for human life cannot be underestimated. The anxieties and doubts that ensue when questions of identity arise, as in the predicaments of Maestro and Ocampo, can be fully explored and understood, even if not resolved, through art,” said Legarda.

“I celebrate that this year’s Philippine Pavilion argues for the diasporic experience as an intrinsic part of the Filipino identity, as that identity and the nationalism that it fosters continue to shift and remake itself, producing great art in its wake,” Legarda said. 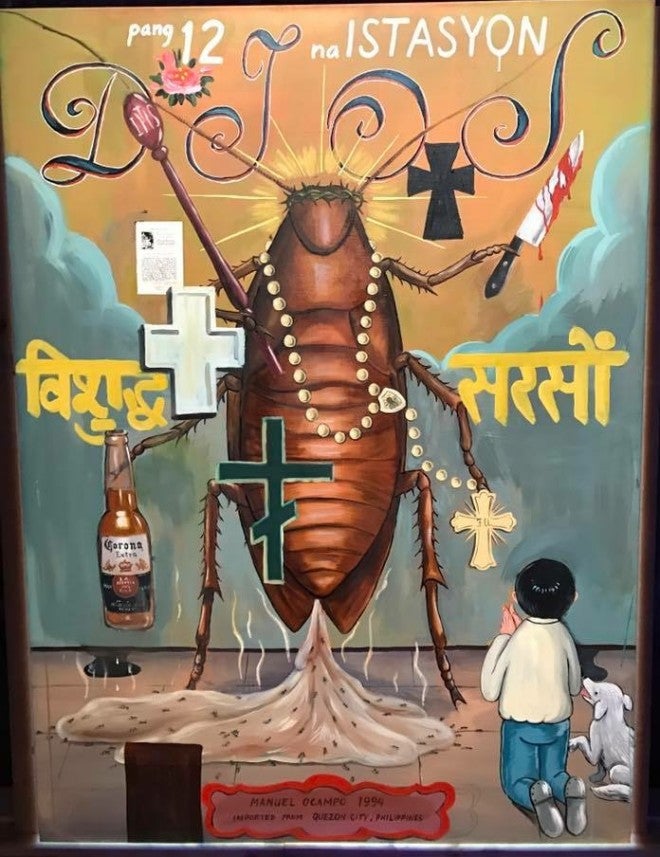 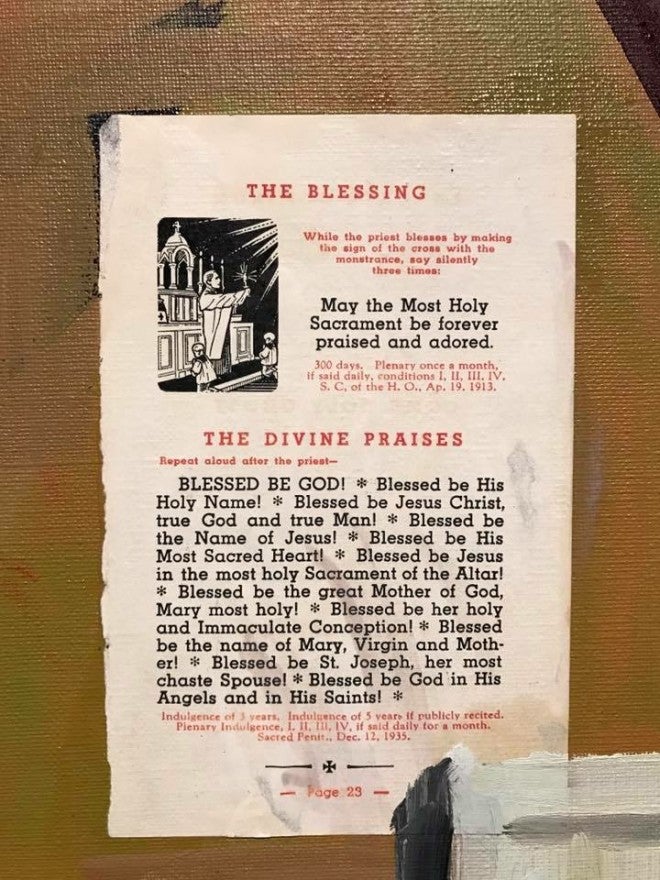 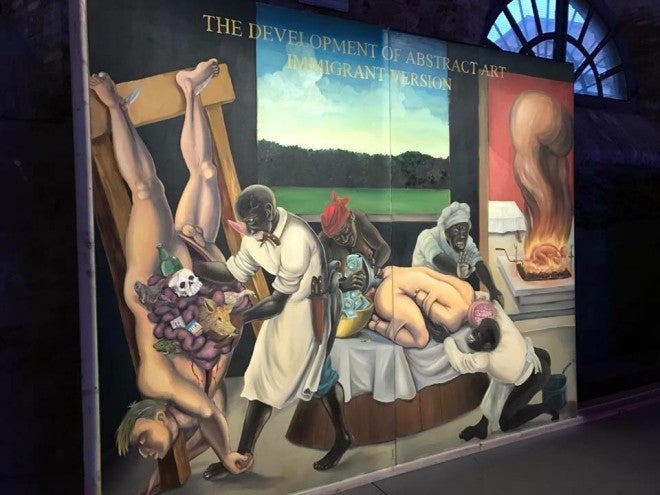 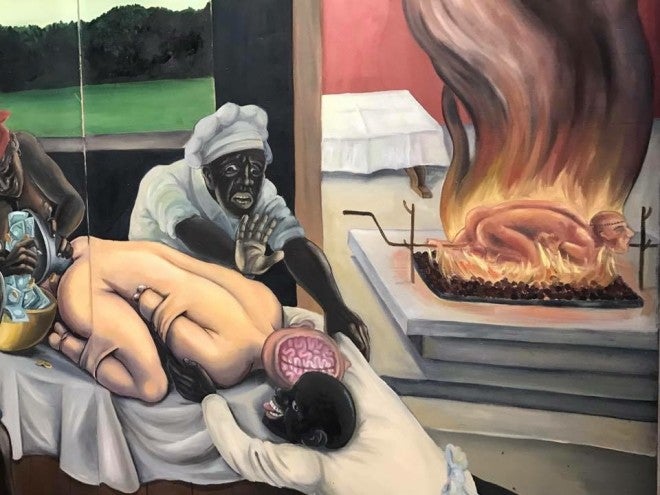 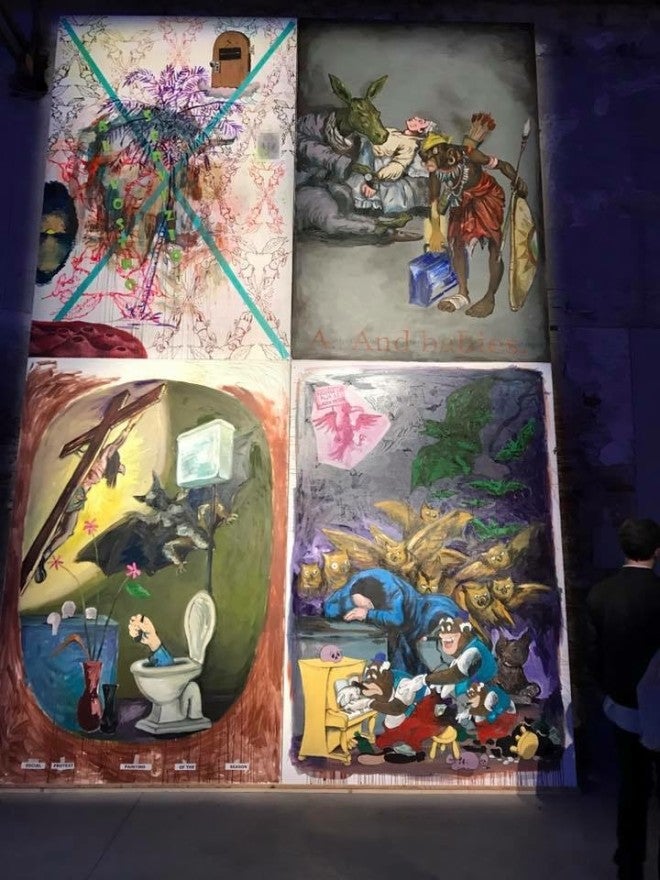 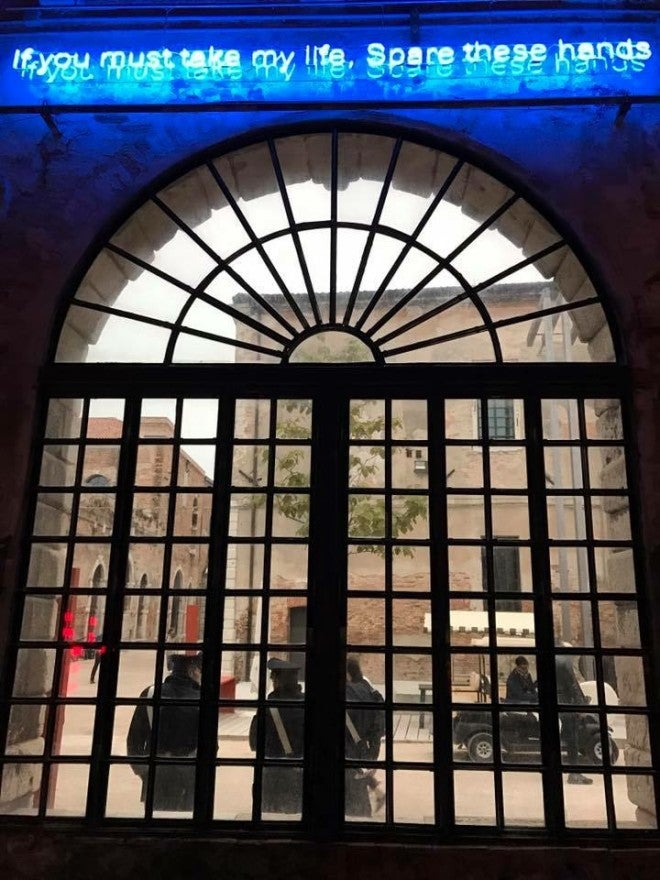 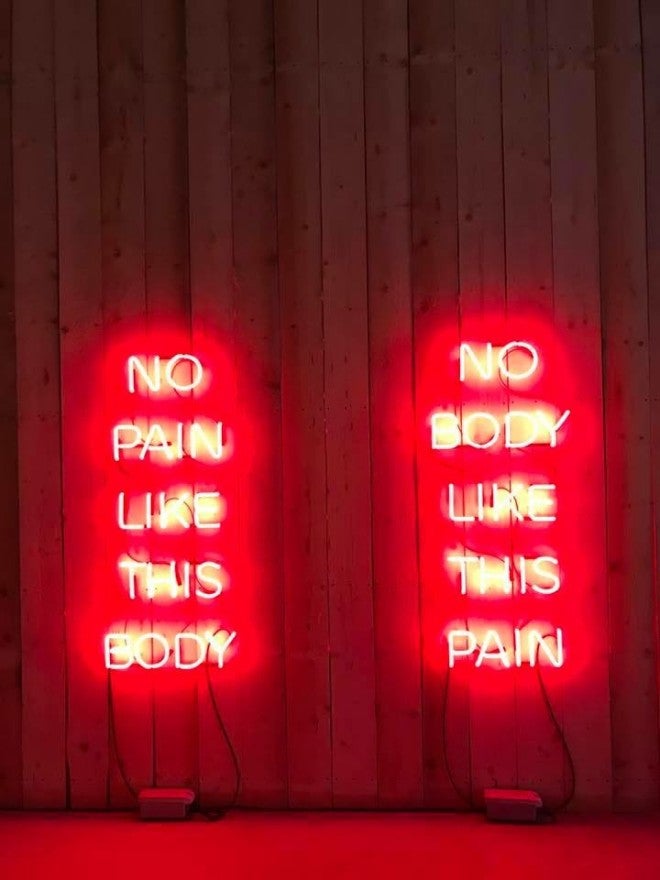