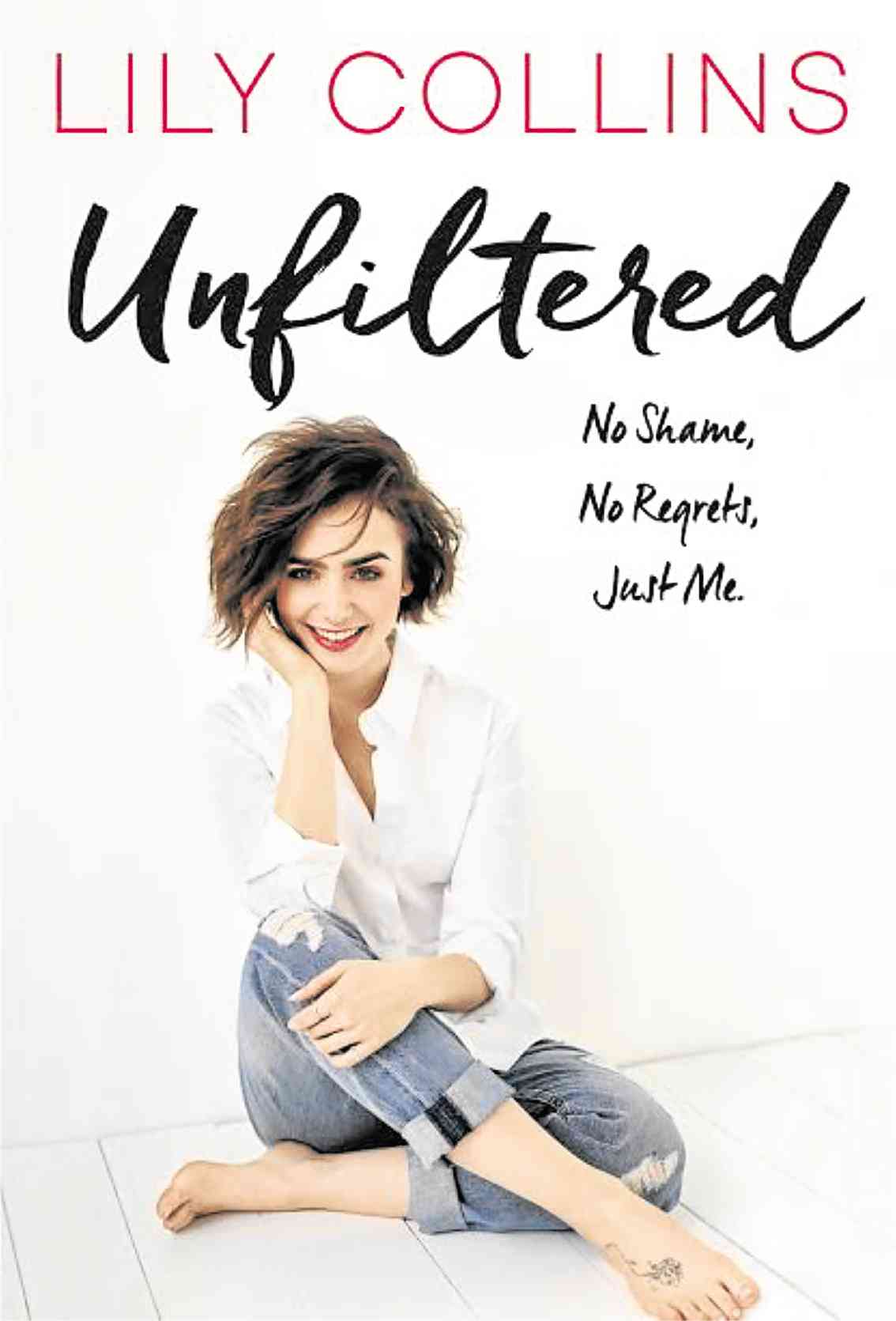 Lily Collins: ‘Individuality is a gift’ 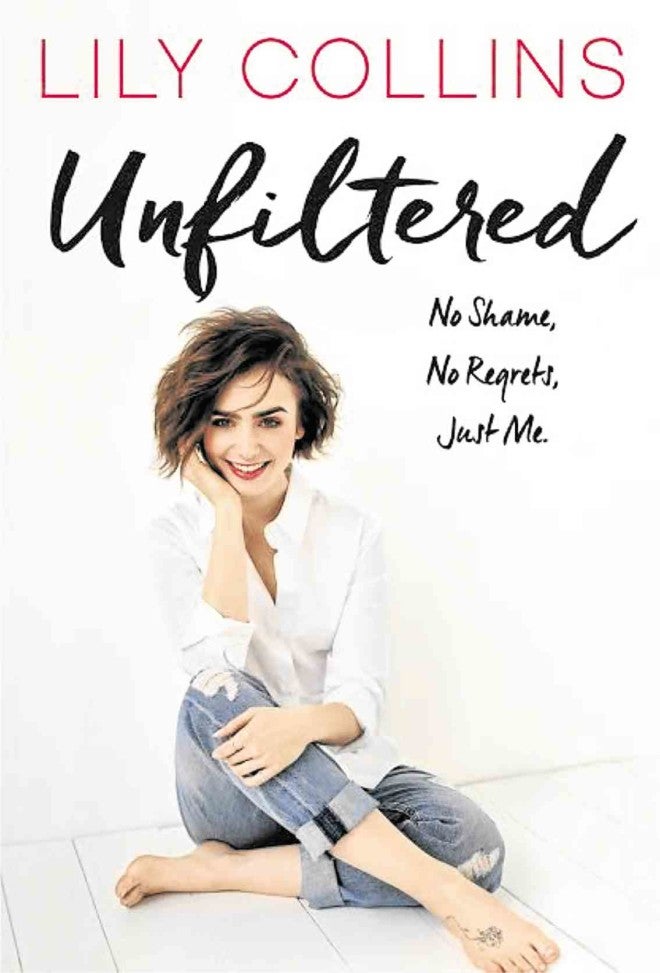 It’s not unusual for actors to become authors, after all, we as fans lap up tabloids and celebrity gossip in an attempt to learn more about our favorite celebrities’ personal lives, so why shouldn’t they write about it from their perspective? Of course, it’s also a well-known fact that not all actors are equipped with writing skills; their memoirs are often realized with the help of a trusty ghostwriter.

In the case of actress Lily Collins, who recently came out with her book, “Unfiltered,” her words are completely her own. While she is known the world over for her work in “Mirror, Mirror,” “The Mortal Instruments: City of Bones” and “Love, Rosie,” or for being the daughter of ’80s music mainstay Phil Collins, or for her bold and beautiful eyebrows, few people know that before she started getting more roles in Hollywood, Collins had been writing in her teens and getting published in Seventeen, Teen Vogue and The Los Angeles Times.

In a quick e-mail interview with Super, Collins shares how the book came about, how her fame helps her make a difference, and why individuality is a gift that everyone should treasure.

Have you always wanted to write a book?

I’ve always loved writing, whether it was in school or for personal enjoyment. I would write poems, song lyrics and journal entries, as well as essays and reports for my classes. When I was 15, I also started writing for magazines both in the United States and England. I enjoyed it so much and thought that one day I may write a book but never thought it would be this soon! I certainly didn’t know it would be about some of the personal things I discuss in “Unfiltered.”

That openness and willingness to share took time and came with a greater understanding of myself. I don’t think I could have imagined being as raw and honest as that because I probably hadn’t come to terms with a lot of it yet. But I knew that one day I’d channel my passion for writing and encouragement of open, honest communication into something I’d be proud of.

A lot of people look up to you; how do you think about that, and how might it influence the choices you make?

I’m so honored to be in the position that I am doing what I love for a living. It’s a little strange sometimes to find myself considered a public figure but if that means I can use my platform to make a difference in some way and use my voice to help others, then that’s an amazing gift. I’m definitely aware that a lot of my decisions and choices are more public than others and it does influence me sometimes, but I also want to live my life and be as true to myself as possible, saying what I feel comfortable with and doing what I want to. Of course I want to set a good example to those younger people who may look up to me but I want to do so by being me and encouraging them to be themselves right back.

How do you deal with haters?

I really try to not focus on the negativity that’s out there. Life’s too short. It’s not an easy thing to do, but I know that for every nice thing I read, I can probably find two or three mean things. I do what I do because I love it and believe in it. Everyone isn’t always going to like what I have to say or do. And they’re entitled to that, but it doesn’t mean that I was to participate in their opinions or way of communicating them. As long as I stay true to myself then that’s all that matters. And sometimes I have to simply laugh at what I read because laughter really can be the best cure.

What advice would you have to give for people who aspire to be like you?

It’s incredibly flattering but I do think it’s so important to all be our individual selves. There’s only one of each of us out there so we should be the best versions of ourselves that we can. I’ve always believed that if we’re pursuing something that we really believe in and we get told “no” along the way, we shouldn’t take that no as “no, this isn’t for you.” Instead it should be “no, not right now.”

Don’t get discouraged to be you or do what you want to. Keep being determined and striving to pursue your dreams. But do it because YOU want to, not because someone else wants you to or you want to be just like someone else. Individuality is a gift. And different is beautiful. Embrace it.

What misconceptions do fans have when it comes to fame and popularity that you’d like to set straight?

My book was very much inspired by a lot of interactions I’ve had on social media with young people around the world. I was so inspired by their bravery to speak up and share their stories about their struggles, insecurities and fears, and I wanted to be just as brave as them.

I also wanted to make sure that they knew I, too, went through the same struggles and faced the same insecurities because they would very often express that they didn’t think I could relate to them. That because I was an actress, I wasn’t exempt from being affected the same way and was part of some elite club who didn’t have to deal with certain things. I’ve always been extremely passionate about speaking up and communicating in order to unite because I believe that the second one person stands up and admits to something, we all can feel less alone.

How do you think life would’ve been for you if you had grown up away from the spotlight? What do you think you’d be doing now?

My life would definitely be different but I don’t think I would be. My oldest friends are from school so I’ve known them since before my career really took off. They knew me outside of the spotlight and they keep me grounded. So I really do feel like I’d be the same person, with the same values and beliefs. I may have stayed in the British countryside and ridden horses or still moved to Los Angeles and just not pursued the career I chose. Growing up, I wanted to be a number of things such as a journalist or fashion designer and more recently maybe even a professional baker so, who knows what it is I’d be doing if not acting. I’m a very creative person and it’s important to me to keep that part of myself super active so no matter what I chose to do, that would be a major factor. “Unfiltered” is available at National Book Store. Buy online at www.nationalbookstore.com.ph or reserve a copy at your favorite branch by calling 8888-NBS. Follow @nbsalert on Twitter and Instagram.