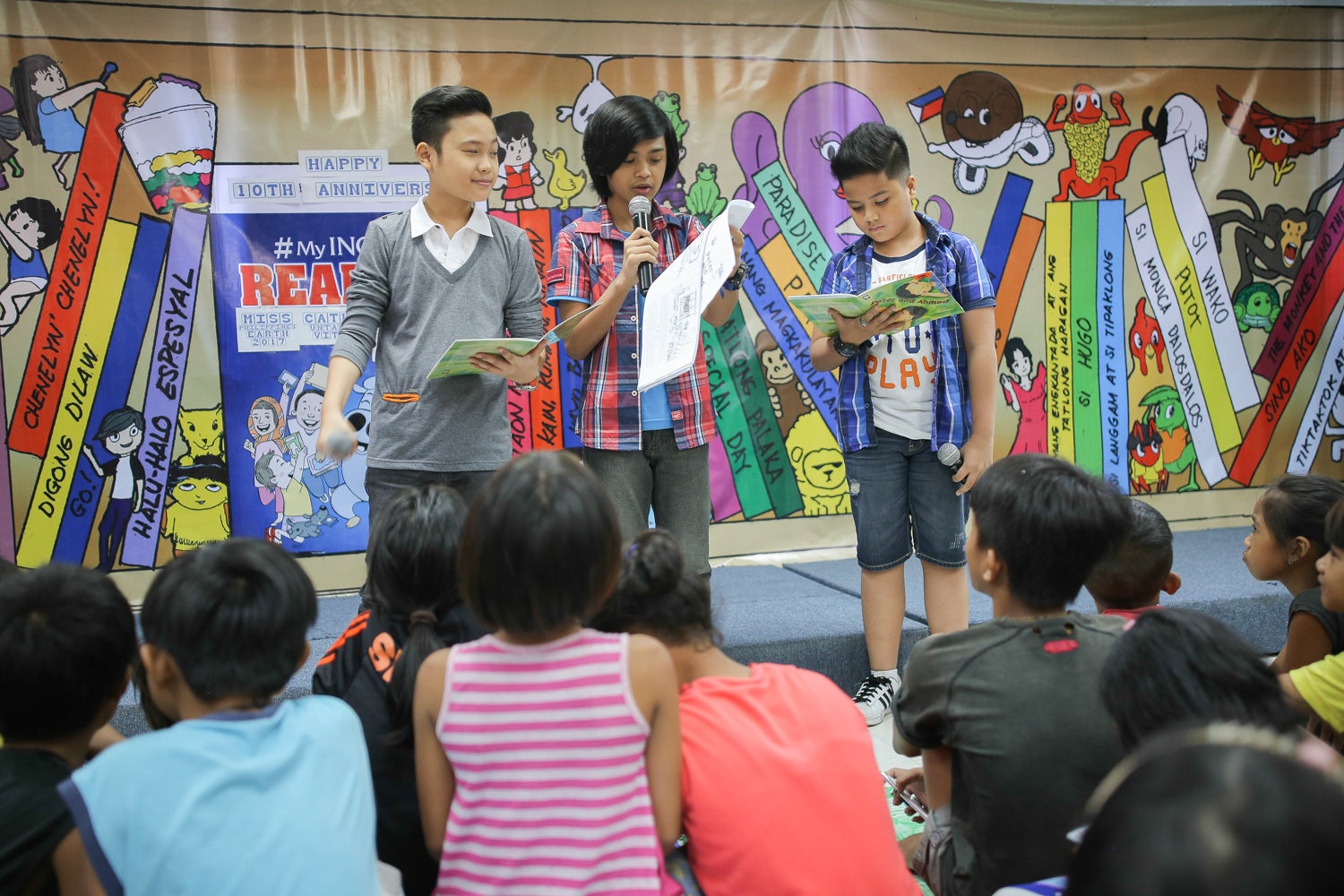 Child actors Miggs Cuaderno, Micko Laurente and Marc Justine Alvarez read to some 70 children the story "Peter and Ahmed," about a Christian and a Muslim who become best friends. Photo by John Paul R. Autor/Inquirer

Inspiring tales of peace and unity were told to some 70 children during the second special storytelling session that celebrated Inquirer Read-Along’s 10th anniversary on Saturday morning.

Child actors Miggs Cuaderno, Micko Laurente and Marc Justine Alvarez read Jojie Wong’s “Peter and Ahmed,” about two young boys who become best friends, despite the former being a Christian and the latter a Muslim.

Veteran storyteller Rich Rodriguez of Ang Pinoy Storytellers took a lively rendition of “Ang Dalawang Haring Siga” by Rene O. Villanueva. It is about two kings of rival kingdoms who set aside their differences after being inspired by their innocent grandchildren who become best friends.

With the ongoing civil unrest in Marawi City in Lanao del Sur province which has displaced locals due to crossfire between military troops and rebels, the young actors have urged everyone to give peace a chance.

“There are innocent children there who are affected by the unrest and peace must be restored soonest possible,” Laurente said.

Alvarez added: “They need peace there so children, who are unaware of what is happening, can return to schools.”

As the country being a top tourist destination and the Filipinos being known for their hospitality, Cuaderno said the ongoing gunfight might tarnish the country’s international reputation and could discourage tourists to visit the country.

“We need world peace now because turmoils have happened in other countries as well,” Cuaderno said.

Founded in 2007, Inquirer Read-Along aims to promote love for reading among children in order to build a nation of readers that is essential in building a nation of leaders.

For the past decade, over 20,000 children ages 7 to 13 from more than 50 cities nationwide have joined the program, which featured over 400 celebrities and role models as storytellers.

Saturday’s session at the Inquirer main office in Makati, hosted by Junior Inquirer editor Ruth Navarra-Mayo, was held in cooperation with Sed Genecera of Miss Earth Foundation and Marinel Cruz of Inquirer Entertainment.