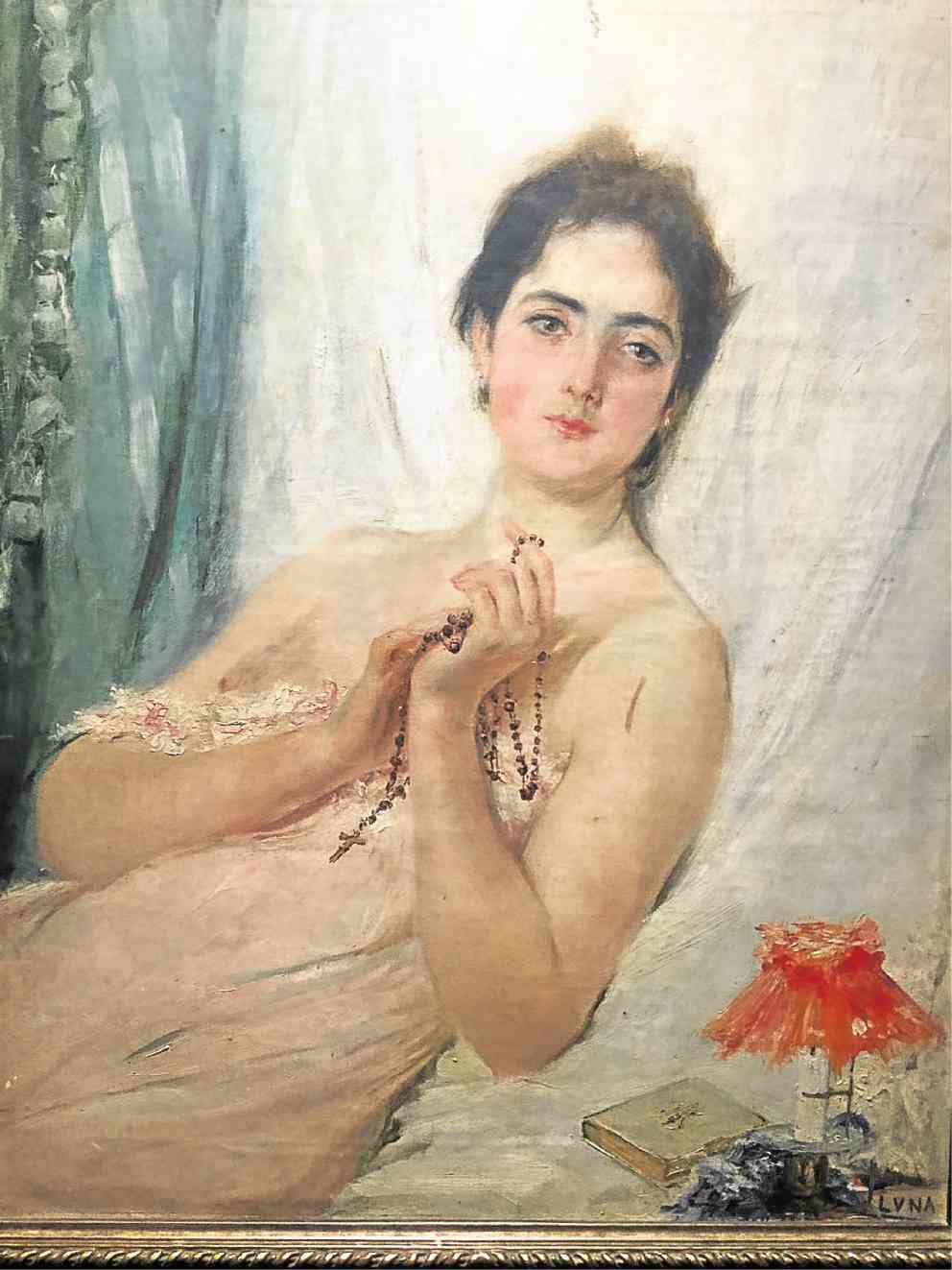 The “Spoliarium” may well be Juan Luna’s largest and most historically significant painting, but it is definitely not his best.

To appreciate Luna beyond the textbook nationalism, visitors to the National Museum should make their way to another hall dedicated to Luna’s lesser known works, over a hundred, hung salon-style, guaranteed to induce artistic overload if you attempt to take it all in at once.

Empatso is the word, so heed my advice: first, this hall requires pacing, thoughtful pauses, and more than one visit; second, do not be distracted by the bagoong-hued walls in this gallery and concentrate on these works that Luna kept for himself. In these previously private works now made public, it is possible to find what the late E. Aguilar Cruz aptly described as “The Other Luna.”

That most of Luna’s productive life was spent abroad, and that he made a name for himself and his country in the salons of Madrid, Rome and Paris, explain why many of his paintings depict European scenes and subjects. If it were not for his signature at the bottom of the canvas or wood panel, Pinoys would understandably mistake them for 19th-century European paintings, hence the question many people are afraid to ask about Luna: Is this Philippine art?

It is unfortunate that Luna painted few Philippine scenes, and of this few, two stand out in the estimation of critics and art historians: “Tampuhan,” depicting a young couple in the middle of a lover’s quarrel, is part of a very private collection in Manila; and a full-length portrait of a baro’t saya-clad, doe-eyed young lady simply known as “La Bulaqueña” or “Una Bulaqueña.”

Before she was permanently installed at the National Museum, “Bulaqueña” hung in the Malacañang Music Room, and during the long Marcos period (1965-1986) she appeared in many official photographs, always in the background, her beauty quietly competing for attention with that of Imelda Marcos, who held court in that now iconic room.

“Bulaqueña” was brought to the National Museum for conservation some years ago and was never returned to the Palace by the Pasig, where she would have been inaccessible to the public. Today, she shares a prominent wall in the Luna gallery with a large portrait of the strong-willed Ilocana, Laureana Novicio, the artist’s mother, and a portrait previously misidentified as Paz Pardo de Tavera, the painter’s ill-fated wife, shot in the head by her angry and jealous husband.

That sordid part of Luna’s life is conveniently swept under the rug, now that the former “Paz Pardo de Tavera” has been correctly relabeled as “Portrait of a Lady” pending identification by art historians.

This anonymous woman has been the subject of many questions, the most pressing being the mixed signals she gives the viewer: she reclines slightly on her bed, her flimsy white nightgown lowered to tease and suggest full breasts obscured by her hands clutching a rosary.

Imagine you are a Victorian-era vampire, hungry and poised to devour your prey, yet you are kept at bay by the rosary or the hint of Catholic guilt.

Was the sitter Luna’s mistress? That we will never know, but here was an identified sitter made anonymous when the woman in the painting was compared with extant photographs of Paz Pardo de Tavera.

It does not help art history, too, that an urban legend has grown around this painting. Its last known owner was then First Lady Imelda Marcos, who donated it to the National Museum after it was blamed for causing Imee Marcos to miscarry, for the untimely death of a previous owner, and for the bankruptcy of an even earlier owner.

Was it a coincidence that the National Museum Legislative Building was taken over by the Senate, the Sandigan and other offices after the portrait entered the museum collection?

Only in 1998, under Fidel V. Ramos, was the National Museum given a trust fund and the present museum complex made up of the legislative building, the finance building and the tourism building.

Three decades ago, Philippine art history lost the name of the sitter for one Luna painting, but the good news is that we have identified the once anonymous “La Bulaqueña.”

Her identity has long been a subject of debate. We don’t even know if the sitter was really from Bulacan, or traced her roots to that province. Over the years, museum staff have reported that visitors to the gallery called their attention, and claimed “Bulaqueña” to be a lola or some distant ancestor whose identity should rightfully be established in the label.

In his monograph on Luna, the late E. Aguilar Cruz suggests that there was a love angle or at least some attraction between artist and sitter. “One does not paint with such grace and affection an ordinary creature, and Luna’s tender sentiments were, doubtless, at least partly, reciprocated.”

One source stated that “Bulaqueña” was one of the two daughters of a certain Mariquita Sabas, who hosted regular tertulias in her home at No. 2 Espeleta St. in Binondo. These parties were frequented by the Luna brothers, Juan and Antonio, who enjoyed the food, music and conversation that flowed from late afternoon merienda to the early evening dinner, something we in the 21st century now refer to as merienda cena.

Sabas’ daughters were Francisca, nicknamed “Paquita,” and Dolores, known to friends as “Loleng.” In the papers of Antonio Luna were found many love letters from Paquita, thus narrowing down the identity of “La Bulaqueña” to Loleng.

A second source, Dr. Asuncion Fernando, claimed “Bulaqueña” was Maria “Iyang” Rodrigo Fernando, heroine of the revolution, who supplied katipuneros with food and sometimes carried messages through enemy lines. According to the late Bulacan historian Antonio Valeriano, Iyang Rodrigo had “bushy eyebrows” deftly captured by Luna, a distinguishing characteristic of the Rodrigo family. Valeriano even pointed to the late Senator Francisco “Soc” Rodrigo’s bushy eyebrows to prove his point.

Third source is Rosalinda Orosa, who identified “Bulaqueña” as a relative named Emiliana Trinidad. This claim, like the previous two, would have ended up in the proverbial dustbin of history if not for documentary support.

Three years ago, Carmelino Alvendia Jr. invited me to dinner to meet his first cousin Ma. Esperanza de Santos Pahati-Olivera, who claimed “Bulaqueña” was her grandmother Emiliana Trinidad de Santos. This time the claim was supported by photographs. As for the rest of the story—Emiliana, Juan, and her wonderful portrait? Let’s leave that for younger historians to find out.