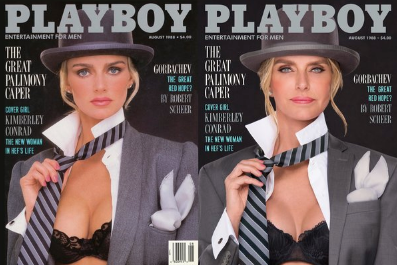 There’s a common saying in Playboy lore that goes “Once a playmate, always a playmate.”

That seems to be the case, as the famed men’s magazine invited seven of their previous playmates to re-create their iconic covers.

Meanwhile, Hef’s son Cooper, who’s now at the helm of Playboy, said he came up with the idea through a casual conversation with his mom Kimberly—who happens to be one of the subjects of the shoot.

We re-created some of our most iconic covers and one our models happened to be @cooperhefner’s mom. pic.twitter.com/mjrT8izZ4S

“I was sitting with my mom on Mother’s Day and thought, ‘Hey mom, do you want the opportunity to reshoot your old cover?’ he said. “A pretty unconventional Mother’s Day gift but she said yes.”

The younger Hefner also announced that the raunchy magazine will be returning to its more revealing roots.

“I’ll be the first to admit that the way in which the magazine portrayed nudity was dated, but removing it entirely was a mistake,” he said.

The rest of the recreated covers are available here. Khristian Ibarrola/JB