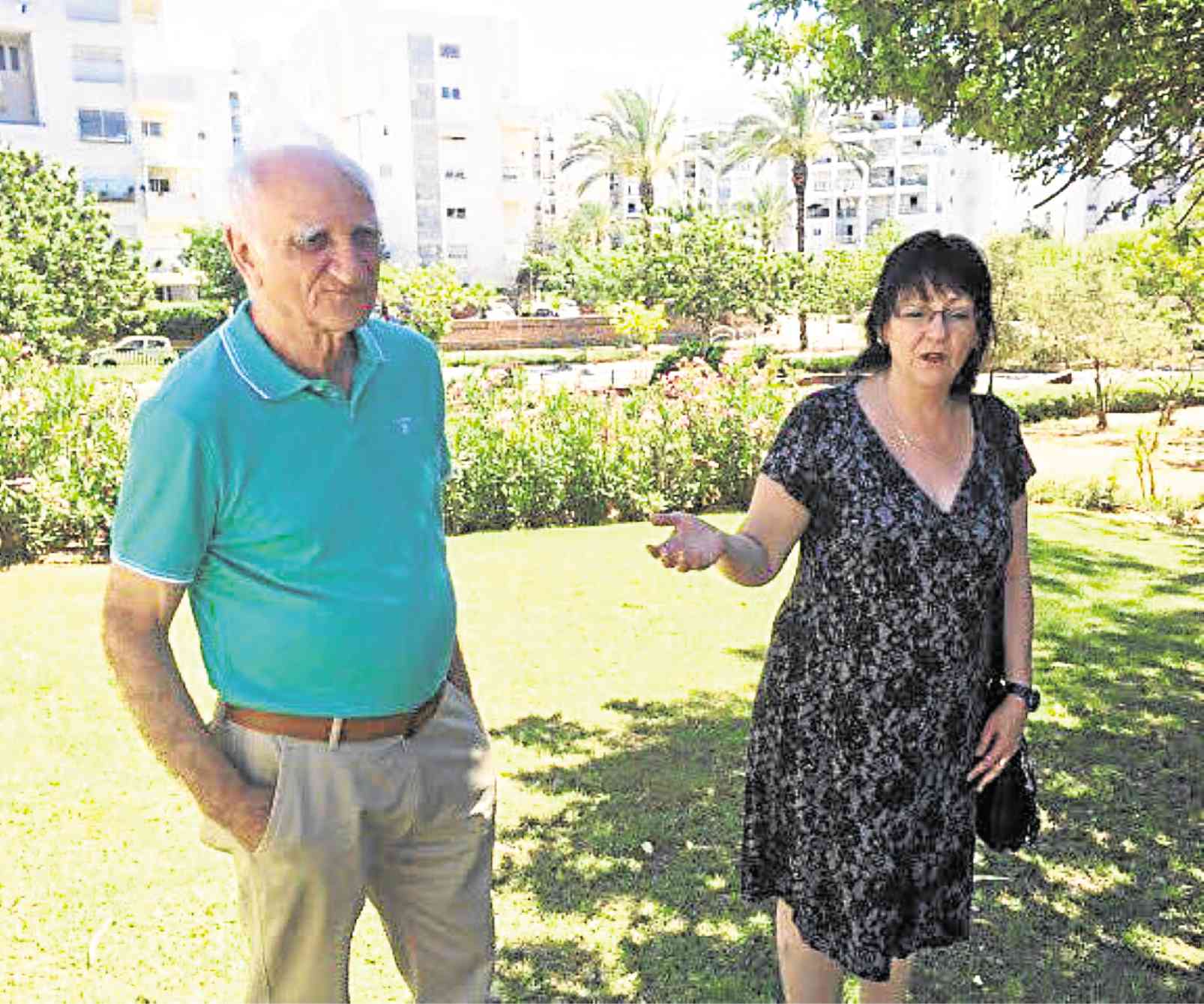 Asher Cohen is introduced to Philippine media and travel delegation by Annette Ben-Shahar, director of foreign relations of the Municipality of Rishon LeZion.

Asher Cohen was 3 years old when he and his Jewish parents in Romania were taken by authorities to a Jewish ghetto north of the country.

It was 1941, Europe had plunged into another world war in less than a quarter of a century, and the conflagration was spreading to the Pacific and countries around it like the Philippines.

The world was on fire.

Ghetto life was difficult as the Romanian authorities, who had allied themselves with Nazi Germany in the war, severely restricted the movements of the Jews. It was a virtual prison life, a village arrest.

Cohen said food was scarce, and the family had to make do with the little provision the authorities allowed to be admitted to the ghetto. Men and women too were subjected to forced labor, financial penalties and discriminatory laws.

Of course, Cohen later realized that ghetto life was a holiday compared with the stark experience of others of his kind: elsewhere in Romania and Europe tens of thousands, even millions, were being herded into concentration camps and led into the gas chambers.

Some six million Jews were killed. But the number could be more, said Mendy Gonda, 67, a former businessman and now a tour guide, who pointed out that the number was based on casualties based on recovered records. The Nazis had destroyed records to hide their genocide, Gonda pointed out.

In Romania alone, more than 300,000 Jews were “murdered,” said Cohen. The number makes Romania, according to the Wiesel Commission, the country “[responsible] for the deaths of more Jews than any country other than Germany itself.”

Now 80, Cohen said the number could have been more had there not been heroic efforts by private individuals and even governments to come to the rescue of the beleaguered Jews.

One of the very few governments, said Cohen, was the Philippine Commonwealth of President Manuel Quezon; it issued 30,000 passports to the Jews in 1939 when the United States had not yet entered the war.

The Commonwealth government also set up Jewish refugee settlements in Marikina and Mindanao.

But because the war broke out in Europe in September 1939, less than 2,000 Jews were able to avail themselves of the passports.

Just the same the humanitarian gesture made an impact on the consciousness of Jewish survivors who had to pick up the pieces of their shattered selves after the war. To the Jews and the Israelis, the Philippines was the only nation in Asia to run to their aid.

As a result, the Philippines has been numbered by Israel and the Jews among “Righteous Gentiles,” such as German industrialist Oscar Schindler, Japanese diplomat in Lithuania Chiune Sugihara, and Swedish diplomat in Hungary Raoul Wallenberg.

In 2007, to commemorate the 50th anniversary of the formal establishment of Philippines-Israel diplomatic relations, Philippine Ambassador to Tel Aviv Antonio Modena and Israeli authorities initiated the erection of a memorial to the humanitarian gesture of the Philippines.

After Modena’s death, the initiative was followed through by Ambassador Petronila Pena Garcia. The result was “Open Doors,” an impressive modern public sculpture by veteran artist Luis “Junyee” Yee Jr.

In the dedication to the monument is inscribed the immortal words of Quezon when he made the decision to help the Jews: “It is my hope and, indeed, my expectation that the people of the Philippines will have in the future every reason to be glad that when the time of need came, the country was willing to extend a hand of welcome.”

Also inscribed are the words of Jewish Manila refugee Frank Ephraim, whose 2003 book, “Escape to Manila,” published by the University of Iowa Press after several rejections by previous publishing houses, reminded younger generations of Jews of the humanitarian gesture of the Philippines during World War II: “The Philippines held out a promise of safe haven from Nazi oppression, offering survival from the mass murder of the Jewish people in Europe.”

Philippine journalists along with top Manila travel operators were brought to Israel by Cathay Pacific, which has just opened a new four-times-a-week service between Hong Kong and Tel Aviv, a boost to devout Philippine Catholics and other Christians wanting to make a pilgrimage of the Holy Land.

The delegation was treated to a very informative, lively, and exhilarating tour-cum-pilgrimage by Mendy Gonda, a a very passionate and informative tour guide of Asia Tours.

Asia Tours brought the delegation to Rizhon LeZion, the fourth (after Jerusalem, Tel Aviv, and Jaffa), and, according to Annette Ben-Shazar, municipal head of foreign relations, soon to be the third, biggest city in Israel.

Located south of Tel Aviv, Rishon LeZion, which means “first in Zion,” was founded by returning Jewish exiles in the late 19th century. It was thus a pioneering community and a prefigurement of the coming State of Israel.

The founders of Rishon LeZion and the later State of Israel can look to the fruits of their hard work. Today Israel is considered the most advanced country in Southwest Asia and the Middle East in economic and industrial development, as well as in science and technology.

Often bedevilled by bad press because of troubles with its Muslim neighbors, as well as with the Palestinian population and their leaders, Israel offers visitors sounds and sights that are a pleasant contrast to its negative portrait by the media.

Tel Aviv the capital is a commercial, financial powerhouse, a cosmopolitan hub. Jaffa is a sophisticated beach town that offers both leisure and healthy lifestyle options to residents and guests. The holy city of Jerusalem is just that and more. Around its biblical walls are uptown shops. Inside the walls is a light-and-sound showcase that can beat anything concocted by Hollywood SFX.

All of this progress and achievement will be highlighted this year when the State of Israel marks the 70th anniversary of its establishment (1947-2017).

In the face of this abounding optimism, Israel remembers and doesn’t forget.

Rizhon LeZion hosts the Holocaust Park, where the Boulevard of the Righteous Gentiles is located. Amid a homey landscape of residential buildings, the park exudes an oasis of vitality and optimism. For parents and their kids, it is a place to contemplate history and its lessons, mostly painful, a few hopeful.

In the afternoon of June 6, it was Cohen, a retired teacher of history, who articulated some of those lessons before the Philippine delegation.

Yee’s geometric sculpture represents in the abstract open doors in metal sheets of varying heights standing on a base of Romblon marble. Triangular patterns represent the triangles of the Philippine flag and the Star of David, themselves symbols of the special friendship between Filipinos and Israelis.

“I want to connect my story with this memorial,” Cohen said while standing before the Open Borders monument. “No other nation did the same like you did and we count you among the righteous non-Jews, Christians and Muslims—who helped the Jews in their hour of need.”

Cohen explained that the three pillars of the monument are a “three-angle symbolism” to represent the three historic events that constitute the “special relations” between Israel and the Philippines.

First was the decisive vote that the Philippines cast in the United Nations in 1947 that created the State of Israel, he said.

Second was the Philippine decision in 1957 to establish diplomatic relations with Israel, the first country in Asia to do so.

And third was “the generosity of Filipinos in helping others” during the Holocaust, and “even up to now” when as caregivers, nurses and other overseas Filipino workers, “they take care of our old people,” said Cohen.

On the floor of the monument are three sets of footprints of former Manila Jewish refugees: George Loewenstein (who sent his cast from Florida where he lives); Max Weissler, who grew up in the streets of Manila in the 1940s so that he knew “kanto boy” talk (he now lives in Israel); and Dorylyz Goffer, a young Filipino-Israeli born in the Philippines and a granddaughter of Holocaust survivors.

The Holocaust remains a searing episode that continues to traumatize and evoke powerful emotions among Israelis and Jews. But whatever feeling of hatred and revenge the episode may evoke, Cohen called for peace and reconciliation. “I hope we can come to a progressive agreement and come to peace with one another,” he said.

On June 15, when the Embassy of Israel in Manila will host a dinner in celebration of Philippine Independence Day, Cohen will be there to celebrate the long-standing friendship between the two nations.

It will be Cohen’s first time in the country. But since he’s always with other Rishon LeZion residents at Holocaust Park and sat at the base of Open Doors, it would be as if he had been to the Philippines before.

“This is one little Philippines in our Jewish hearts,” Cohen said.