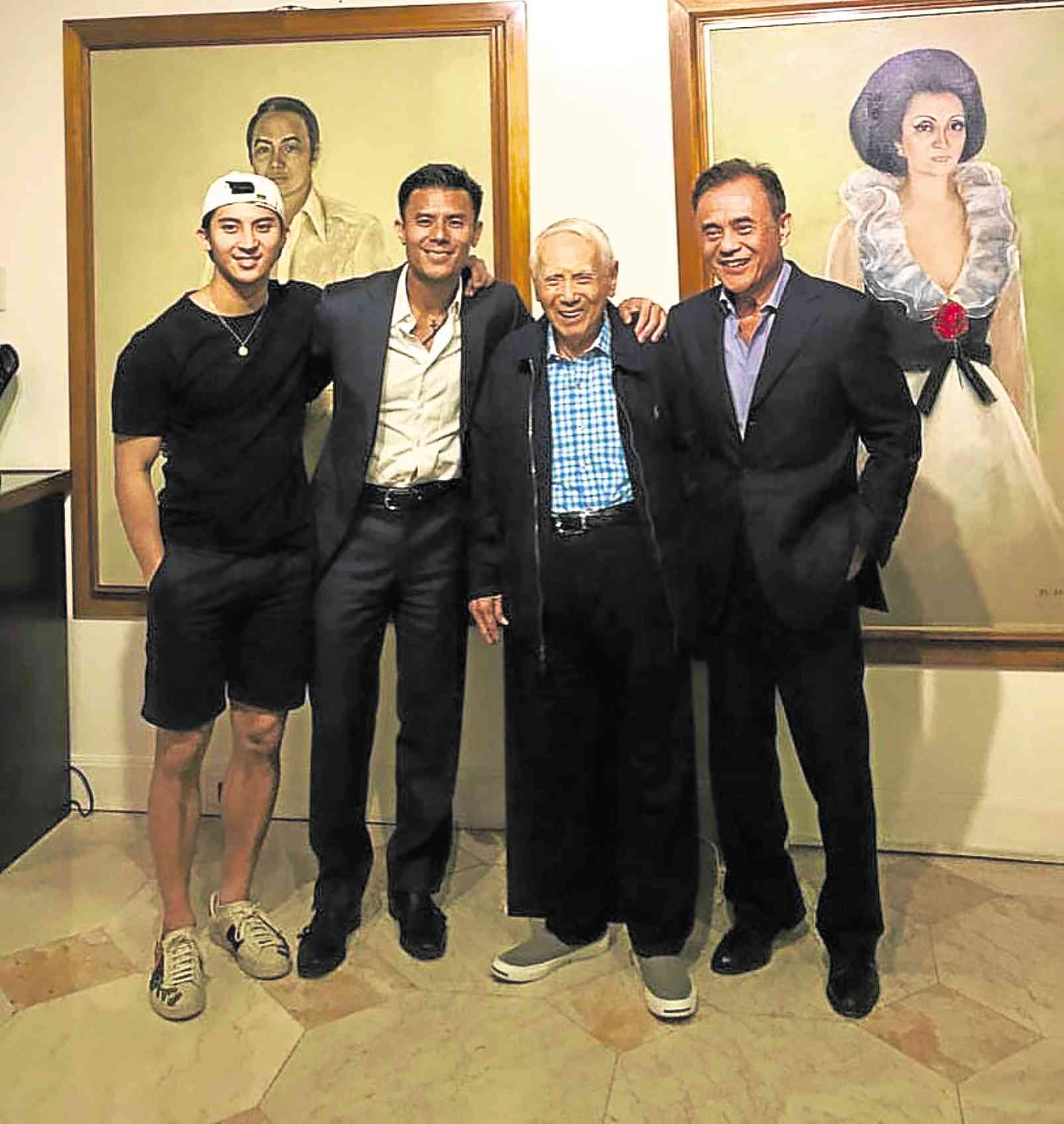 Knowing who you are and being true to yourself is a precept the Tantoco family lives by.

“He wants us to discover who we really are and what we really want to be. The only thing he asks from us is to never choose the easier path; he also does not want us to freeload on the efforts of others. He wants us to measure our lives by how much we maximized the blessings we were given, and what kind of contribution we are adding to our team, our family and to society. He gave us the enormous courage we needed to be productive, to be ourselves. The world isn’t really a good place for people who want to be true to themselves. You need courage to be that.”

Likewise, he and his wife, Crickette, impart the same values of understanding the self as the foundation of being part of the community. They ask their children the same questions: “What do they believe in? What mission do they want to devote themselves to? What do they value? We need to help them go through the journey of self-discovery. The answers must be theirs apart from our expectations and the pressures of society.”

In discipline, Donnie has been firm about safety first, and absolutely no drugs. Like his father, he steps in when his children choose a path simply because it’s the easier way.

The older Tantoco, an entrepreneur with a military background, was stricter. Although Donnie and his sibling enjoyed their freedom, they were also made aware of responsibilities for their actions.

Despite their busy lifestyles, the fathers make time for their children. Through the years, Rico used the family’s leisure hours to teach his children not to be lazy thinkers. Over board games such as Monopoly, Donnie learned economics.

Even bonding time over weekly lunches become informal lessons on life. “He tells stories and then somehow weaves the lessons into it. I have to think about them because the point is underneath all these layers. I used to tease him, ‘Hey, dad, you are speaking in parables!’” says Donnie.

“My dad does not want to spoonfeed us with his solutions. He will just try to impart the right principle when I bring up a problem to him. He will say, ‘Don’t right a wrong with another wrong’ or ‘Always have a back up plan to a back up plan’; ‘Pain is inevitable and should be confronted.’”

The older Tantoco has set a fine example of humility. When he was in charge of reforestation of La Mesa Dam, Batanes and Zambales, Donnie tagged along and saw how his father gained cooperation from both farmers and armed rebels who initially challenged the project.

“I learned from him that it is better to persuade rather than fight people who resist your project. He was very successful, and he helped save and replant a lot of forests,” recalls Donnie.

As a parent, Donnie has been learning from his children by going out on a date with each child every month over the years. His eldest twin daughters, Nicole and Camille, were only 10 years old when he took them out to their favorite places and shared their activities.

“We basically learned to have a good and nonpreachy and open conversation,” says Donnie.

Lately, he tagged along with Camille, now 27, to hot spots among millennials. Donnie discovered Bucky’s in Poblacion, Makati, and also enjoyed a Japanese restaurant that served creative sushi.

“I told her this was delicious, but where were the main courses?” he says. They capped the evening at a snack bar which served shaved ice desserts from South Korea.

“I would never have known about these places and types of food without experiencing these with my daughter. Most of all, I just loved discovering her world and listening to all her stories,” he says.

To Donnie, “me-time” is “us-time,” with the family. He considers his role as a father as a blessing. “My personal goal is to give them all the love, support and protection that God meant for me to provide for them.”

Lucio Sr. wouldn’t have reached that status had he not dedicated most of his life to work. Although the older Tan had no time to bond with his children, Bong never felt something was lacking.

He was given the best education—University of California, Davis, the Language Institute in China and Beijing University—where he picked up the discipline and efficiency of the West, how to speak Mandarin, and pursue his passion, learning basketball techniques.

“Something has got to give. Through education, I learned to adjust and make the most of situations,” he recalls.

His father never let the ego of status get into his head, and he taught Bong to fend for himself. “My father was very strict. He kept telling me that I was born with an empty sack. It’s up to me to fill it up with gold or garbage,” says Bong.

Holding top positions in his father’s companies, Bong has picked up a lot of lessons from the senior:

1. Give most of what you have to the less fortunate.

3. Nothing beats hard work. Earn your living. Nobody will make money for you.

4. Studying is a never-ending process.

5. Defend what you think is right, but keep your eyes and ears open.

6. Finish what you have to do today. Don’t wait till tomorrow.

7. Always test the waters, but never with both feet.

On teaching his sons, Bong explains he’s passing on his learnings from the patriarch, “They have to know that they are quite different from other people.” He’s not just referring to their privileged life, but also their extreme intelligence. “My sons have to adjust yet focus on important things.”

When they were young, Bong would pick them up from school and enjoy each other’s company over a meal. The sons received their early education on life from travels. “The trips opened their eyes to other races and environments,” he says.

Through the years, Bong has learned to be flexible in situations, even in his parenting style. Some of the things that his parents taught aren’t applicable today. “Times have changed and some things have to improve,” he says.

Her father, Senator Juan Ponce Enrile, will always be her hero. A son of a fisherman’s daughter, he worked his way up to becoming a powerful politician.

“My dad came from very humble beginnings and his experiences never left him. Those experiences molded him intensely to the person that he is today. He values hard work, humility, determination and good education as tools to succeed in life—all off which he had impressed upon me many times as I was growing up,” says Katrina.

“What impresses me the most about my dad is his brain. At 93 years old, his mind is as sharp as a knife. He is definitely misunderstood by many people but he has a heart of gold.”

When Katrina was a teenager, her mother Cristina was the disciplinarian. However, Enrile, then defense minister in the Marcos era, stepped in when Katrina crossed the line. Sometimes, the naughty Katrina slipped out of the house late at night while the older Enrile stayed up late to have her searched.

“There were no cell phones then, only radios. When I received a radio message from my guards, patay! I knew what was coming next!”—a sharp dressing down from her father.

In her teen years, Katrina and her father bonded over breakfast and during foreign trips. Enrile even escorted her to discos.

“Now that he’s much older, we visit each other’s houses. We go to Cagayan where we just talk all day about anything and everything. I listen to him recite poem after poem from memory. His favorite one is ‘If’ by Rudyard Kipling.”

Five lessons from Manong Johnny, as he is known:

3. Get a good education.

Prominent architect Conrad Onglao is an empty nester. Yet he is proud that his sons have chosen to be independent.

When Kenjie, 29, a professional photographer, went to live on his own, he never asked money from his father.

Mikey would tell his father that San Francisco’s cost of living is expensive; Conrad maintained that his son should live within his means. He had taught them how to budget and how to stick to it.

Conrad says he was a working student in college so that he could afford the things that he wanted. “I never asked money from my parents.”

The value of money was an important lesson taught by Conrad’s father, Juvenal. “He would say, ‘Never get used to something that you couldn’t sustain.’ My kids were raised on a certain standard of living, but it’s not the real world. They have to work on a budget every month and not exceed it,” he says.

One of his lessons in life is to let his sons choose their paths. Conrad recalls that his mother insisted he should become a doctor. Although he obliged by enrolling in BS Chemistry, he realized it was not his calling.

After wasting two years before shifting to architecture, he vowed that he wouldn’t demand the same from his children. For instance, Kenjie chose photography as a career despite studying advertising in Belgium.

During their teen years, Conrad was strict when his sons went out, imposing a midnight curfew. The sons complained about why their friends could stay out till the wee hours in the morning. But for Conrad, it was a case of tough love. He cautioned them about smoking and drinking. But he also tried to be more of a friend, encouraging them to open up to him.

“I’m not going to pass any judgment. But I still tell them what I think as a parent,” he says.

Weekends were always bonding time with Conrad cooking his sons’ favorite meals and going out of his way to go to the market for fresh ingredients. He maintains the family day tradition imparted by his parents.

Over these lunches, Conrad would share lessons from his father such as being generous in sharing one’s knowledge.

On Saturday family days, singer-actress Zsa Zsa Padilla would join the cooking and create meals for her children. “My sons and her children get along very well,” says Conrad.

Although his sons are young adults, he still offers them gentle reminders on life, and they still seek his opinion about important matters.

“I do my best as a father,” he says. —CONTRIBUTED