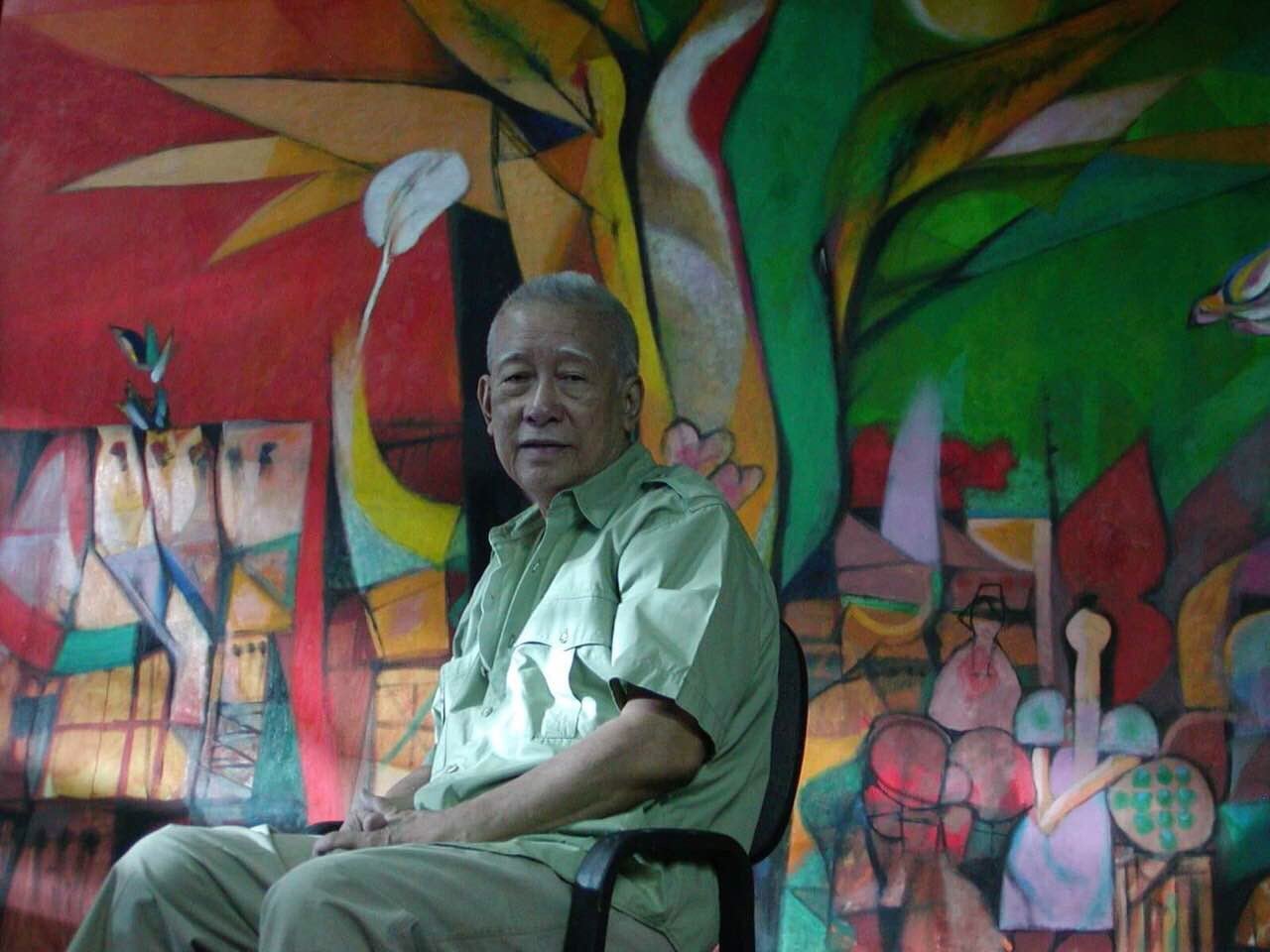 Art is an action against death. It is a denial of death.” Thus said the French sculptor Jacques Lipchitz.

The paradoxical statement is manifested in the demise of a vanguard of Philippine art modernism, Mauro Malang Santos (1928-2017), who leaves behind the rich land colorful legacy of his art, a body of works that attest to the artist’s prolific production borne not of creative angst and torment but of a joyous spirit and exhilaration, and an undeniable attachment to Filipino customs, rituals and traditions.

Whence the origin, the deciding influence that shaped and determined the familiar Malang style?

For, to be sure, a distinguishing mark of an artist is an instantly recognizable style, a look that will not be mistaken for another. Indeed, who would not fail to recognize at first sight an Amorsolo, a Manansala, a Luz, a Kiukok, a Sansó or a BenCab?

Malang’s images have so dominated the artscape for decades such that his drawings, prints and paintings now grace the mansions of the elite and the lobbies of corporate institutions; indeed, even finding their way in an advertising poster for a milk brand, or the artist himself endorsing the country’s leading chain of bookstores as a source of art supplies.

Surely all these are a sign that an artist has ascended to a kind of pop celebrity, embraced and comfortably settled in the national consciousness. (Alas, the perverse and dark side of this manic adulation of an artist’s work is the forgery of his works, their fame ironically engendering motives less noble that mere admiration and appreciation. Malang’s works have not been spared.)

Popularity was both a boon and a bane for Malang. In 2000, a survey conducted by a daily ranked Malang as the third most popular contemporary painter, after Fernando Amorsolo and Vicente Manansala.

This mass popularity, however, was regarded by some quarters as a reason to denigrate his art, which frankly he had already acknowledged as having been influenced by his cartoons and comic strips.

Florentino Dauz, the poet, hit it right on the head: “In the eyes of those who make it a religion to denounce Malang and his art, the greatest transgression he has committed is premised on his being popular.”

Little known, however, is the fact that it was that most intellectual of the postwar artists, H. R. Ocampo, who had egged Malang on to paint, even plying him with sets of colored paints.

For, precisely, Malang’s introduction to the limelight did not come by way of his art but from his cartoons and comic strips. No less than National Artist Nick Joaquin once christened Malang the “Magus of the Masa,” comparing him to Honore Daumier, the 19th-century French cartoonist, celebrating his gift for “extolling the quotidian and satirizing the current, not to mention the talent to be lively and comic even when dealing with bane and folly. Hooray for the artist who can make us laugh at ourselves!”

This was a man who hardly finished a semester of Fine Arts at the state university; not for want of interest, but to heed the more practical and realistic call of employment in 1948, at the Manila Chronicle in Intramuros where he was assigned to do editorial cartoons and lay-outing.

In this journalistic world, his constant company were his illustration boards, pen and India ink, poster colors, and tiny brushes with thin pointed bristles.

Malang said: “I had no choice but to do miniatures because I was doing nothing but comic strips, how could I do anything bigger?”

Being an avid fan of American comic strips, it was Malang himself who had volunteered the idea of creating his own: thus was born the now classic “Kosme the Kop.” He conceived and executed both the story and illustration.

What was evident in these achievements was Malang’s surprising narrative skill distilled in a few frames and his witty and humorous sensibility, all these indicative of a sharp and perceptive observation of the Filipino psyche.

A single work will suffice to make the point: his Art Association of the Philippines first prize-winning work in the cartoon category, titled “Sabungero,” limns literally a multitude of cartoon figures, each one drawn from a diverse range of emotions reflected in facial expression and gesture.

“That’s where my painting style comes,” Malang quipped simply. That in itself was a humble admission of his art.

His first one-man show was held in 1962 at Lydia Arguilla Salas’s Ermita Gallery, the now historically significant Philippine Art Gallery, which nurtured the talent of Filipino artists who had emerged after the war. Not surprisingly, his works were all miniatures, a little larger than a square foot, mostly in rectangular format, looking more like studies for a future larger work.

Nonetheless, they already depict what would be the trademark subjects of the artist: squatter shanties or the barong-barong, Chinatown, facades of churches, corner sari-sari store, jeepneys, cityscapes with their urban neighborhood, and yes, the women vendors clad in the picturesque butterfly-sleeved baro’t saya, accented with a religious scapular. This was the constant attire worn by his beloved mother, an image he has perpetuated in his own art.

An extant touching photograph exists of the artist as a child of four or five, posing for the camera, all innocent smiles together with his eldest sister Segundina, his Kuya Ricardo and his Nanay Justina.

A cross-hatched portrait of his Tatay Regino, a startling likeness done when his son was 17 years old, already identified Malang’s fine and sensitive hand with pen-and-ink.

Admiring the way Malang had captured the Filipino spirit in his cartoons and miniature artworks, the illustrious painter Fernando Zobel de Ayala, then still based in Manila and working with the family corporation, had suggested that he translate his images into a large-scale canvas, in effect commissioning Malang to do a mural-size work for the Ayala-owned Insular Life Insurance Company.

Unaccustomed to such a sudden shift in scale, Malang sought the help of fellow painter Jose Blanco. The result was the panoramic 4 ft by 16 ft work titled “Barrio Fiesta.”

It was installed on the top floor of the building, a welcome sight ushering guests to the cafeteria and auditorium. (When, decades later, the Insular Life building was razed by fired, among its casualties was this early masterwork. Malang then reconstructed this work, but this time, he painted it all by himself.]

When it comes to painting technique, Malang claimed, “I do a lot of ad-libbing.”

He referred to a process which is best described as impromptu or improvised, something not planned beforehand, in effect, a performance on-the spot. As in music like jazz, to which Malang was fond of relating his works—“ a lot of subtraction and addition”—he subscribed to no musical score.

“Labo-labo ang kulay ko. (My colors are all mixed-up).”

But the result, almost always, are a marvel of chromatic exuberance, fearless in courting an over-the-top symphony of brilliant shades and shimmering hues that spangle the central image of Mother and Child, Woman Vendor or the Filipino Family. Not even his detractors could deny Malang’s gift for colors. Chagall, with his lovers in the sky, would have approved.

Eventually, the women figures evolved into the most expressionist renditions, with their long attenuated necks recalling Modigliani’s works, and massive extremities, induced certainly not by correct anatomical proportions, but by the demands of what Malang instinctively felt was a right and rigorous, therefore successful, design.

As to the choice of mediums, Malang preferred gouache, a kind of opaque watercolor which afforded the artist the use of bright luminous colors, and because of its quick drying time, allowed him to render a succession of various colors, one layered after another, baring glimpses of the paint underneath. Operating on the same principle of pointillism, it is the eye that mixes the colors, resulting in a more radiant retinal perception.

Gouache is a medium that is now inextricably associated with Malang, as egg tempera was to Anita Magsaysay-Ho and enamel was to National Artist Arturo Luz. When Malang then shifted to oils, he preferred the oil sticks, which strokes functioned more like a pen rather than a brush.

Despite the constant criticism that his works were merely pleasantly decorative and cheerful and charming, but bereft of social significance, Malang had his early defenders who championed his works.

National Artist Arturo Luz regarded the works of Malang as “a celebration of Philippine customs and rituals, observed with sympathy and insight through the symbols, rites and fixtures of the contemporary urban environment. It is a personal vision not only of a gifted artist, but of an active participant and observer sensitive to the color, texture and temper of a city he has learned to love and paint.”

The most active art critic in the ’60s and ’70s , the late Leo Benesa, had a unique insight shared with this writer which was nothing less than an eye-opener: “What Malang is interested in is a certain universe. Because I think his theme is cosmic, and by that I mean, large. All these miniature paintings give the impression that Malang is a ‘light’ artist. But, no, his themes are not light.”

This parallels another critic Dr. Rod Paras-Perez who observed that “Everything in Malang’s world proceeds with a measured sense of order.”

The writer, critic and painter E. Aguilar Cruz, noted at length that “while Malang’s art is as unlike those of the traditional schools represented by Amorsolo as a straight line is different from a scroll, yet they both bear the stamp of that quality Filipino art lovers mean when they say ‘Filipino.’ The warmth of the sun, the blue of the horizon, peaked roofs, the sad, beautiful women, and the countless artifacts of the Filipino house, as well as street scenes, animals, vehicles, and suburban foliage—all are in the art of Malang, bearing testimony to his love of life and people.”

While, indeed, art can be claimed to be a denial of death, it is in fact a triumphant affirmation of life: “Ars longa, vita brevis!” –CONTRIBUTED