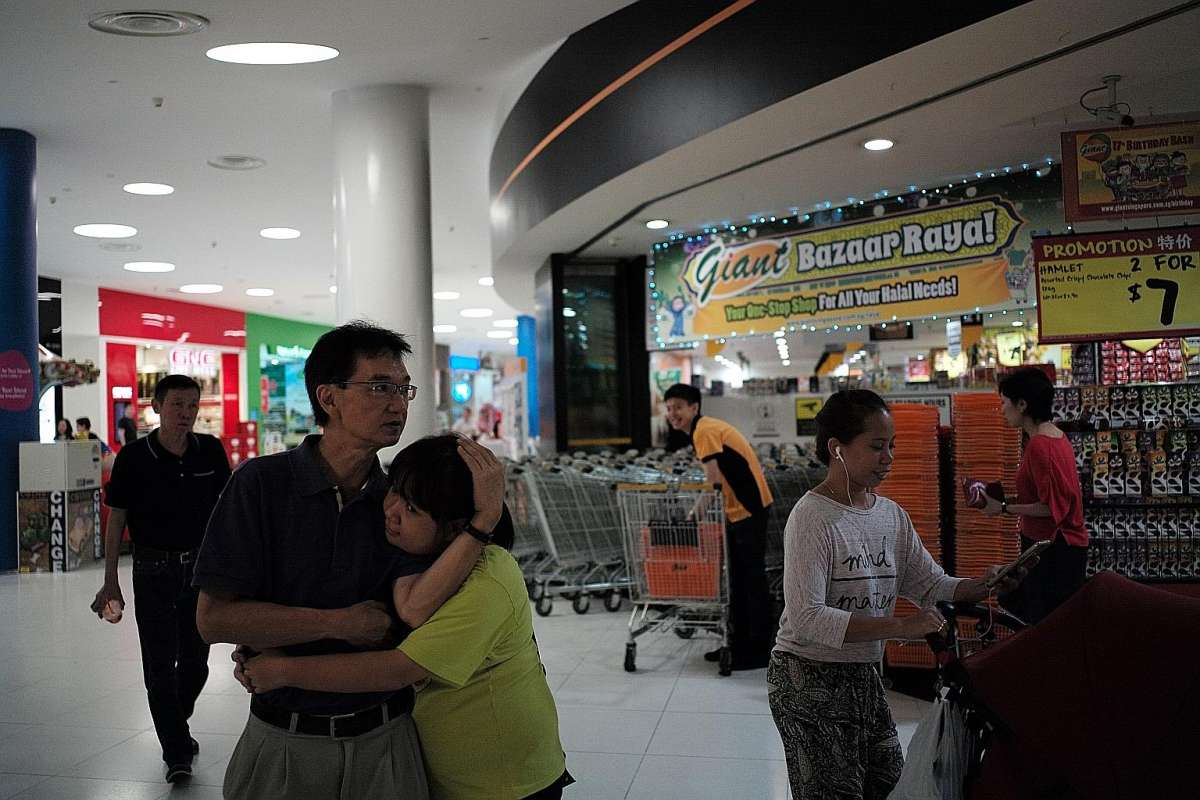 Mr Peter Tay, 62, hugs daughter Priscilla Tay, who is disappointed at not meeting her friends who work at Giant VivoCity. Mr Tay often takes Ms Tay, who has hyperactivity and mild intellectual disability, to see her friends as a way to motivate her. He hopes his youngest child will, one day, be able to lead a happy and meaningful life on her own. THE STRAITS TIMES PHOTO

My special girl: A father shares journey as caregiver to special needs daughter

Mr. Peter Tay is known to friends as a walking encyclopedia, well versed in many subjects. The one time he found himself at a loss was when his youngest daughter Priscilla was in kindergarten.

He did not understand why Priscilla would not follow instructions from her teachers. She could not sit still for a long period of time, was easily distracted, and would distract others.

What seemed to be normal mischievous behavior got worse. Tay, 62, and his wife Ira Tjiang, 60, sought help.

Numerous brain scans and diagnostic tests found no problems. There was no family history of mental illness. Priscilla Tay, 22, was eventually diagnosed with hyperactivity and mild intellectual disability.

“We had so many questions. Why her? Did she have a head injury? Maybe the wrong food? Or malnutrition? It was very difficult for us to accept the diagnosis,” said the semi-retired former chief executive of a water-treatment company.

When it was time for Priscilla to go to primary school, her parents thought carefully and decided to place her in a special school, fearing that she would be unable to cope with the rigors of a regular school.

Priscilla spent 12 years at APSN Katong School, and then enrolled in the APSN Centre for Adults in 2015.

“Singapore is an extremely unforgiving country. Twenty years ago, it was almost unthinkable for any parent to admit they had a child with special needs,” said Mr. Tay. Years of soul-searching led the Tays to realize that their daughter needed support from those closest to her to build confidence and self-esteem.

In 2014, Priscilla also enrolled in group therapy at the Institute of Mental Health, to learn the social and communication skills that would help her navigate the challenges of interpersonal relationships.

Her parents, who have two older daughters, struggled to accept their situation but never shied away from making sacrifices. Madam Tjiang gave up her part-time manufacturing job to care for Priscilla and, despite English not being her first language, did her best to read up and speak to professionals on how to support her daughter.

The close-knit family lives in a five-room Housing Board flat in Hougang.

Said eldest daughter Sharon Tay, 31: “My dad plays the role of the disciplinarian at home and sets the family rules. He, and everyone in the family, had to learn and relearn what it meant to be a parent and sibling to a child with special needs. He has had to learn to be more flexible with his rules and to be more participatory, simply because the whole process of working with a special needs person is just more involved.”

Mr. Tay takes his youngest daughter out to swim and exercise regularly. Priscilla is inquisitive, good with gadgets and at memorizing names and phone numbers.

He also takes her to see her friends at work to motivate her.

“Children and people with special needs must be helped and be equipped with social skills or the proper skill set so that they can strike out on their own without burdening the country or the social system,” said Mr. Tay.

Over the years, he has grown to ignore naysayers and their negativity. But he advocates healthy conversations and dialogue with other parents and members of the public on helping people with special needs, to create awareness and share his belief that even if you have a child with special needs, you should not give up on him.