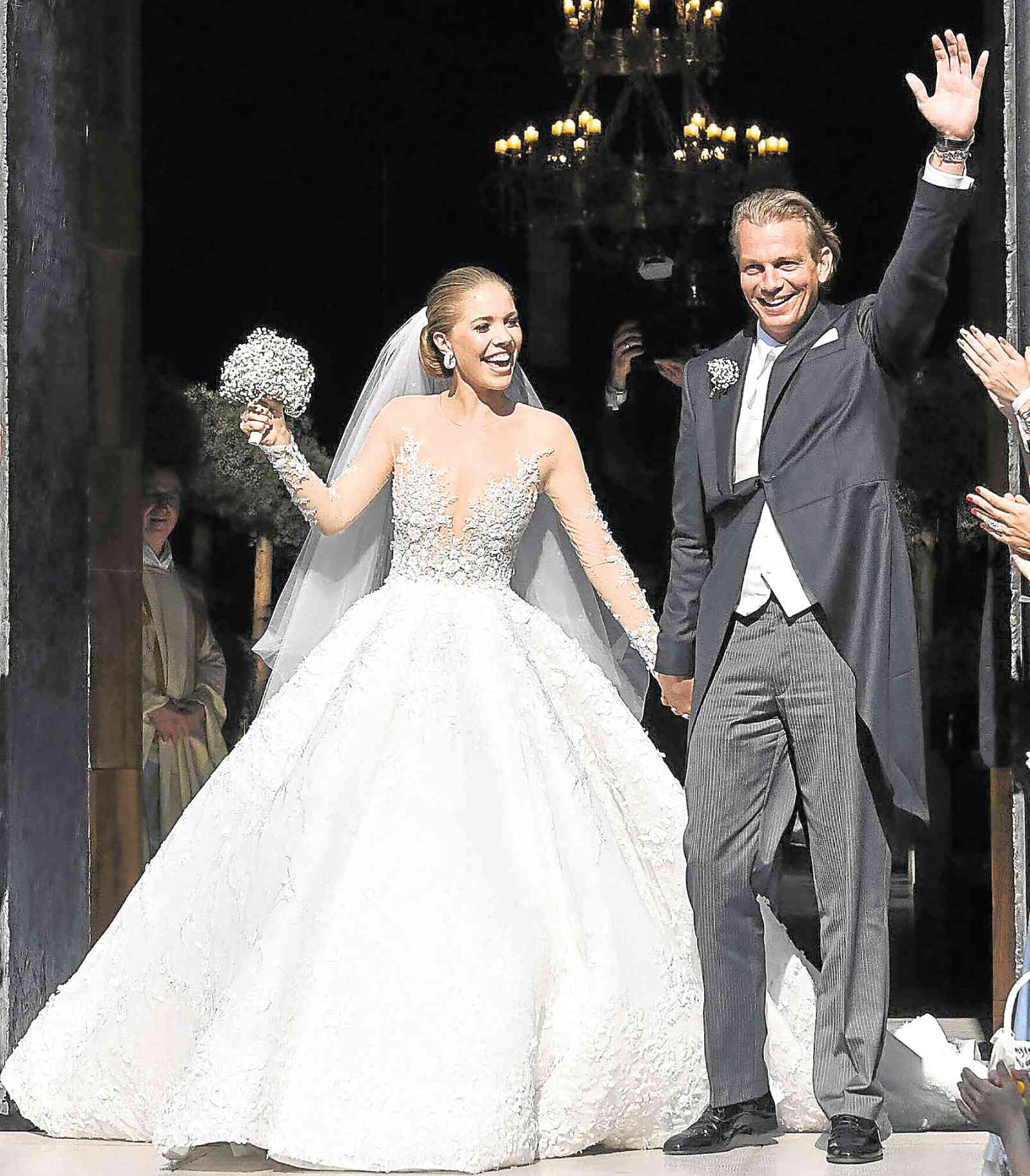 A young bride whose family name is synonymous with sparkling crystals wed her beau in a dress hand-beaded with thousands of those luminous baubles, designed by Filipino designer Michael Cinco.

Victoria Swarovski, 23, a sixth-generation member of the Austrian Swarovski clan, is the daughter of Paul Swarovski, a descendant of Swarovski founder Daniel Swarovski. His daughter chose the Dubai-based Cinco to make her wedding dress after seeing one of Cinco’s designs on the internet last November. A common acquaintance in Dubai eventually introduced the bride and the designer.

Swarovski, a pop singer in Austria, wed Werner Murz over the weekend in a lavish affair in Trieste, Italy. At the gala dinner of the three-day affair, she also wore another Cinco dress—a high-low, fully crystallized red number with a deep-V halter neckline.

“She told me on the phone that she wanted something spectacular, but at the same time, classic and elegant,” Cinco tells Inquirer Lifestyle of his conversation with the bride. “And, of course, with Swarovski crystals.”

It took Cinco five months to create the dress, which consisted of a dramatic ball skirt, a see-through bodice in stretch nude tulle, the bust parts of which were covered in intricate beadwork, and a detachable five-meter train. It was embellished with thousands of transparent Swarovski crystals.

“When she came to Dubai for her fitting last May, she was with her two stunning sisters and they brought three suitcases full of Swarovski crystals,” Cinco says.

“Representatives from Swarovski’s Austria main office contacted me and asked me about the crystals I wanted for the wedding dress. I told them of all the transparent crystals that I wanted and she brought all the thousands of crystals when she came for her fitting.”

Cinco, however, wouldn’t give the cost of the dress, which various reports pegged at £700,000. He denied, however, that it weighed 46 kg—“If it were that heavy, she wouldn’t have been able to walk!”

Swarovski, however, is just one of Cinco’s many VIP clients. And though he declined to say how much his couture wedding dresses cost, one can give the ballpark figure upon seeing his client list.

Cinco designed the bridal dress of the daughter of the ruler of Dubai, Sheikh Mohammed bin Rashid Al Maktoum, at her recent wedding, including one for the after-party. He also made three dresses for the daughter of Malaysian prime minister Najib Razak, who recently wed in a headline-making affair.

Cinco made global headlines recently with his sensational fairytale couture dress worn by Bollywood star Aishwarya Rai on the Cannes Film Festival red carpet. The ice-blue off-shoulder number was fully beaded and embroidered down to its voluminous ball skirt.

Apart from the mega-rich women in the Gulf states, the Samar-born Cinco counts among his clients the likes of Beyoncé, Jennifer Lopez, Rihanna and Lady Gaga. Closer to home, he made the wedding dress of Marian Rivera in 2014 and dressed Pia Wurtzbach in a cobalt confection not unlike Rai’s for her final walk as Miss Universe.