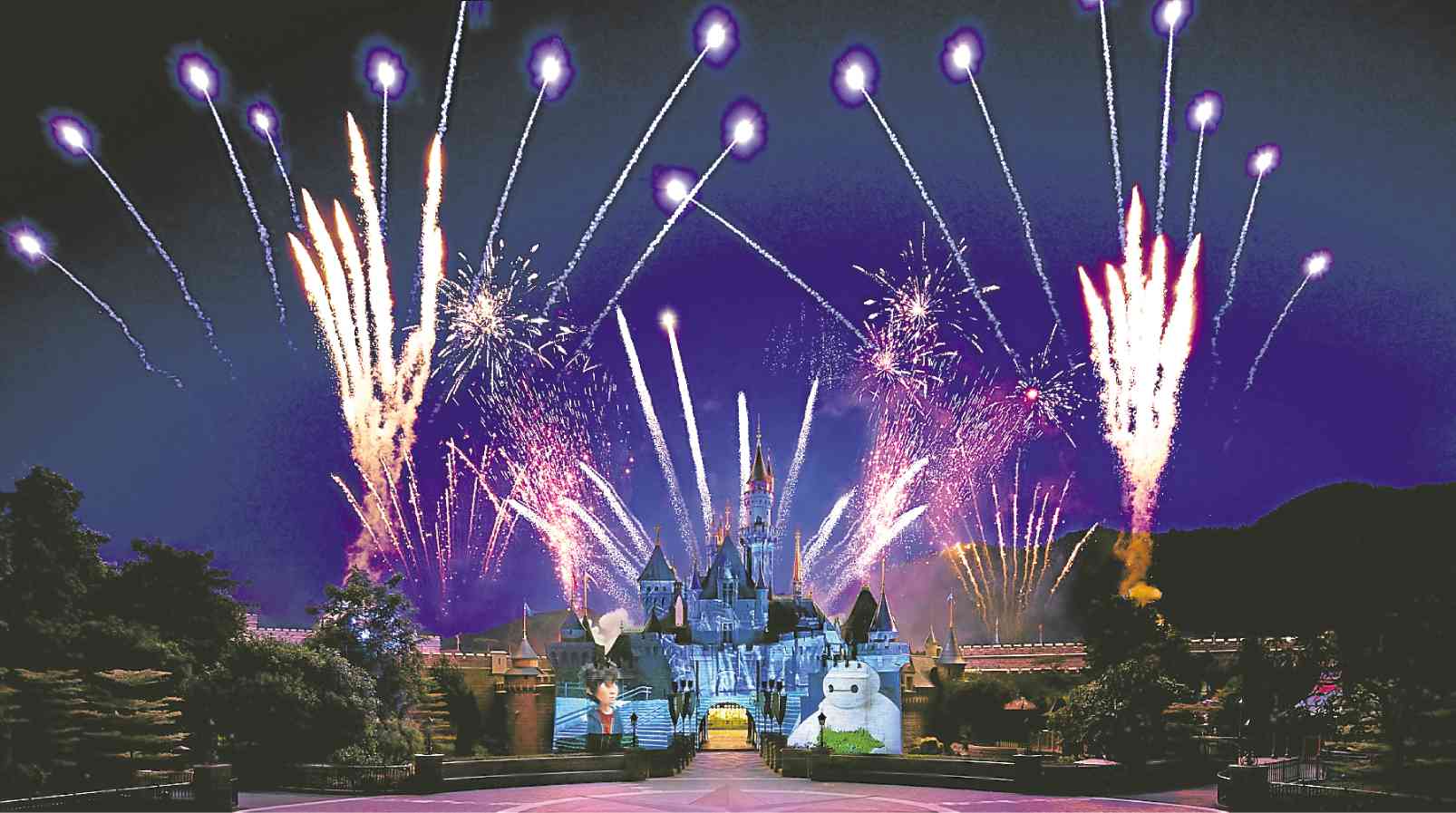 “We love your dress,” we said to Cinderella.

She smiled, clasping her gloved hands together. “Thank you. My fairy godmother made it for me.”

We asked Snow White how the Dwarfs were.

She said, “Oh, very good. They’re as busy as can be in that diamond mine.”

And before we said goodbye, we told her, “Don’t eat any apples.”

There are moments at Disneyland that make you feel like you have stepped into a movie, like you have left this world and entered a different realm. And that’s not by accident.

Kelly Willis, Director for Creative Development for Walt Disney Imagineering at the Hong Kong Disneyland Resort, said, “Walt Disney was a movie maker to begin with and so when he conceived a theme park, he turned to his film directors and storyboard artists and really applied that filmmaking mentality to building a theme park and that rings true today.”

“You can break it down into three basic principles of storytelling. Creating the long shot, which is giving you the big picture, that sweeping shot of establishing where you are in a point of time. The medium shot starts to give you a little more detail, starts to introduce the characters a little bit more, you start to understand the storyline… But really it all hinges on the close-up shot and that’s when all of the details come into play. Every single detail is thought about and really is successful because of the totality of all the details coming together to make that whole. It is that attention to storytelling that really transports and allows our guests to get lost in that story and nothing takes them out of it until they enter the next experience.”

“That’s what’s fun and exciting about any immersive environment that we create: having our guests become truly immersed in our story and discover some of the nuances that help make it so magical. Those details are very important. Our guests aren’t going to get every detail the first time. That’s why it’s fun to come back and you see the familiar but then you also discover new things, right? That detail gives the complexity to our storytelling.”

It’s true. We’ve been to the park four times and each time has offered surprises. Like Woody welcoming us to Toy Story Land by saying, “You must be the new toys.” Seeing nuances at Mystic Manor that we hadn’t noticed before.

But it isn’t just the details—there really is always something new at Hong Kong Disneyland. “We’re influenced by so many different nationalities and cultures and it gives us the opportunity to explore themes that we might not have explored before. Being out here and understanding and operating in this region has helped us and has helped influence a lot of our stories. I think that bringing new and unique stories to Hong Kong, ones that have not been told in other places, is exhilarating and it makes me proud that we’re able to give back to our fans something that’s unique.”

They add new attractions and themed lands to the park. Toy Story Land, introduced in 2011, is one that’s close to Kelly’s heart. “I was the executive creative director for Toy Story Land and so for me, it’s.. my baby. It’s very fun, it’s energetic, it’s so youthful. We take that story from the big screen and make it a real-life experience that you can step into and enjoy as one of Andy’s newest toys. I think that’s very fun.”

Filipino favorites Grizzly Gulch and My stic point opened in 2012 and 2013. Both themed lands are the first in the world. ‘“I love when Disney does cutting edge things like Mystic Point. It is beautiful to me. I love the architecture, I love the eclectic inspirations from all the different regions. The attraction itself is cutting edge.”

Other new attractions to enjoy are the Iron Man Experience, Marvel Superhero Summer, Fairy Tale Forest presented by Pandora (our new favorite!) and the Broadway style musical Mickey and the Wondrous Book which brings to life seven of the greatest Disney stories of all time. The Disney Paint the Night Parade is a must-see. Witness your favorite Disney characters light up the evening with LED lighting technology, music and dance.

But don’t miss the Flights of Fantasy Parade either. It’s remained fresh throughout the years. It was a joy to behold. There were babies in their strollers kicking in glee. Grandmas wearing Minnie ears singing along. It was wonderful to be surrounded by people of all ages and colors all mesmerized by the experience. Clearly, the power of Disney magic knows no bounds.

Kelly thinks the secret is the storytelling. “It is taking the mundane and turning it into something magical.”

And there are so many magical moments. Watching Mickey and Minnie holding hands and skipping as they take a break from posing with fans. Iron Man telling us, “I never know how to dress for these things—how do I look?” Feeling like a superhero while battling Hydra in the Iron Man Experience. Witnessing the musical spectacle that is Mickey and the Wondrous Book. Witnessing my favorite characters light up the evening at the Paint the Night parade. Breathing in the cakes and experiencing the music at Mickey’s PhilharMagic. Falling in love with Duffy and ShellieMay. Getting a warm hug from Pluto. A Disney cast member handing us a Mickey Mouse sticker before we could even ask and then saying, in Filipino, “Kumusta ka?” as he sent us off on an unforgettable Mystic Manor adventure.

‘Disney in the Stars’

For older fans like us, a visit to Disneyland isn’t just about fun. It’s a trip down memory lane, a reminder of the many joyous things Disney has brought into our lives. That’s why we were close to tears as we saw King Triton and Ariel during the Paint the Night Parade. That’s why “Disney in the Stars” gave us goosebumps as fireworks went off and scenes from some of our favorite films were projected onto Sleeping Beauty Castle.

As you exit Hong Kong Disneyland, there’s a sign that reads: “Thank you for visiting.” But we were the ones feeling grateful. That they continue to create a place where magic reigns, imagination rules and adults can feel like kids again. We can never get enough of the magic.