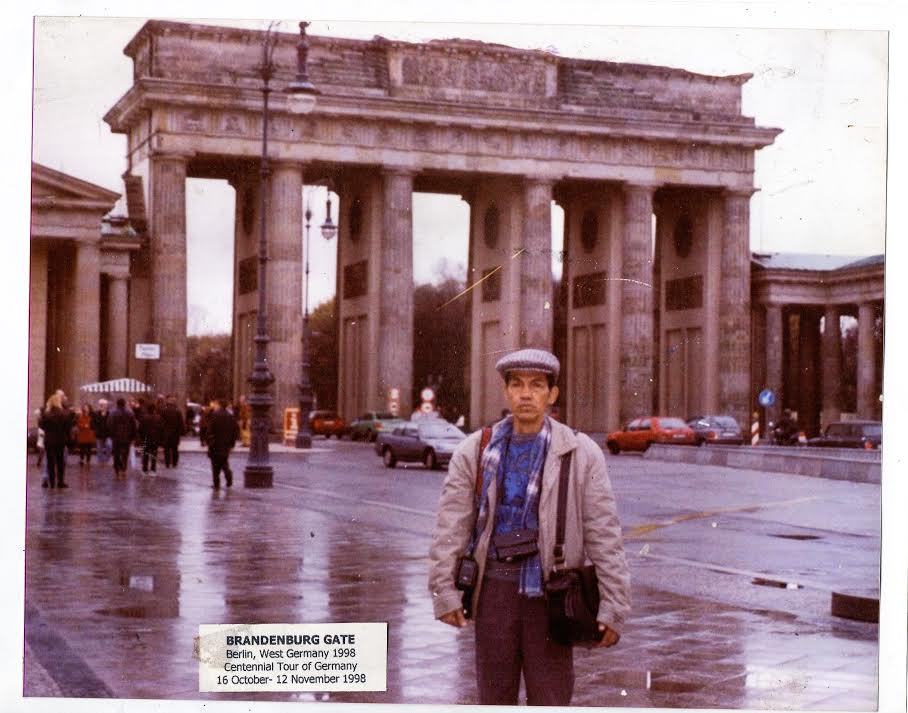 Author at the Brandenburg Gate, 1998

The temperature was freezing and it started to drizzle.

We took shelter in one of the coffee shops along Unter den Linden Avenue, a fashionable avenue of aristocratic Old Berlin and once the heart of socialist Germany.

Today, the almost one-and-a-half-km long and magnificent Unter den Linden ( meaning beneath the linden trees) boulevard, which is the most famous avenue frequented by city folks and tourists, has undergone a complete face lift.

We took a leisurely walk along the historic boulevard dotted with stately buildings, some of Berlin’s finest museums, galleries, several theaters, hotels, business and banking quarters .

It was reported that “in the tree-shaded cafés along the promenade, Rizal and Maximo Viola took their coffees and snacks, sipped beer in the city’s inns, bought newspapers and talked with friendly Berliners during their sojourn in the city in May 1887.”

Another highlight of our sojourn in Berlin was a visit to Alexanderplatz (Alexander Square), situated right at the center of Berlin and the spiritual heart of Germany’s biggest city.

According to report, “Alex,” as the Berliners called it, was once the site of the Central hotel where Dr. Rizal   stayed.

The place was a bombed to smithereens in World War II but redesigned in 1966 by the East German government.

We asked for directions that would   lead us to   Jaegerstrasse No. 7, the address of Rizal’s hotel that he sent to pastor Karl Ullmer. It was a useless search since nobody seemed to know it.

During a leisurely stroll along a section of Berlin one wintry cold afternoon , I was reminded of Rizal’s bleakest winter in Berlin in 1886.

While Rizal was putting the finishing touches to his first novel, he was struck by financial problem in Berlin as Paciano could not send him his monthly allowance from Calamba.

As a result, ” he ate nothing but bread for days.”

Then Rizal thought: “If I am going to die, I prefer to die for freedom, the welfare and the happiness of my country and my people”

They were “months of intense study, of rich experiences and frugal ways, of idealistic dreams and actual encounters with people of diverse cultures.”

In Berlin, Rizal devoted his time to his medical studies as well as his literary writings despite undergoing privations.

Life in Berlin was not that easy for Rizal.

According to a report: “Rizal worked in the morning as an assistant of Dr. Schweigger’s Clinic and in the evening he   attended lectures in the University of Berlin. ”

“At the boarding house, he continued his physical trimming exercises and practice in speaking German, French and Italian languages. Before resting in the evening he took time writing and completing his first novel.”

His association with numerous German intellectuals and noted German ophthalmologists led to his membership in prestigious societies, such as the Anthropological Society and Geographical Society of Berlin.

During his leisure moments, he toured the country sides and observed the culture and life of the people. All these he captured in his various sketches.

After several months’ stay in the German capital, where he spent the Christmas holidays of 1886, Rizal in a letter that he sent from Berlin to his sister, Saturnina, and his brother-in-law Manuel Hidalgo, gave a full account of his activities in Germany.

He wrote: “As you should know, I am here in Germany, going from city to city, from town to town, visiting all the centers of learning, the town schools, parishes, churches, and often, after hearing a catholic sermon, I go to a Protestant church to hear preaching…”

One writer mentioned that “Rizal’s travel could be considered as a very significant and constructive aspect of his life because in the course of his travels, he acquired a broad knowledge and deep understanding of Germany and its people, its history, culture, literature, customs and traditions, which greatly influenced his two immortal novels.”

Rizal and the ‘Noli’

It was in Berlin where Rizal wrote “the last fourth of his first novel during the winter days of Feb 21, 1887, the earlier chapters of which he had already finished in Spain and Paris , including the preface, which was deadline 1886.”

In idyllic Wilhelmsfeld, Rizal made crucial revisions of the draft in April-June, 1886, while on a three-month vacation with pastor Karl Ullmer’s family.

Over 2,000 copies of his novel printed at Berlin Buchdruckrei-Action-Gesselschaft, came off the press on March 21, 1887, nearly five months after Rizal’s first visit to the German capital.

Determined to find the printing shop where the novel was produced, we continued our tour hoping to discover   plaques, memorials and signage associated with   the national hero. But to no avail.

With the steady rain, icy wind and overcast skies, we ended our memorable tour at the iconic Berlin Wall of the eastern part of the city

The 12-ft-high and 116-km-long infamous wall which separated friends, families and a nation   for 28 years   came down on Nov 9, 1989 and brought about the reunification of East and West Germany.

Today only the watchtowers and a few segments of the wall remain as memorials and tourist attractions.

As I stood in deep thoughts before the infamous wall, images of jubilant Berliners with their version of People Power clambering up the walls sprayed with graffiti and joyously celebrating their escape to freedom, flashed in my mind.

I reminisced what Rizal wrote: “Freedom and progress can only be attained by fighting and dying for them.”–CONTRIBUTED

Ramon M. Roda is a retired professor of Spanish and Rizal Course at the University of Santo Tomas. He has received grants from the Spanish government for travels and studies in Madrid and Santander.