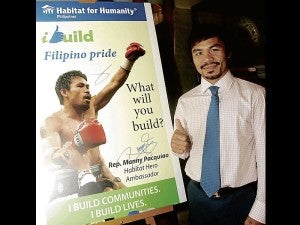 How many of you have always wanted to meet a modern day hero? Well, I got my wish last Monday at a dinner at Fernando and Kit Zobel’s home. I met Manny Pacquiao.

Dressed smartly in a blue checkered suit and shirt and  blue tie, with an infectious smile and disarming charm, Pacquiao walked into  the Zobel home (Fernando is the Habitat for Humanity Capital Campaign Chair) to loud applause from the guests.

The dinner was in honor of the People’s Champ, and to welcome him as one of the Ambassadors of Habitat for Humanity (HFHP).  “I Build Filipino pride” is Pacquiao’s campaign statement.

The evening started with a sumptuous buffet by Kai restaurant, then top TV and radio newscaster Karen Davila introduced the HFHP vision with a beautiful and touching slide presentation. 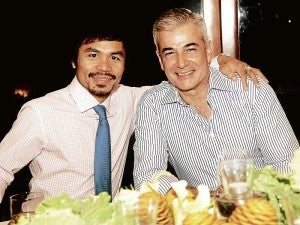 One of the principles of HFHP that I truly believe in is the fact that it does not give dole-outs to home partner families. Instead, they believe in “sweat equity,” which means that the families have to pay a minimum amount to repay the homes, which is important, and which gives them a sense of ownership and pride.

But in the case of disaster victims, like those misplaced by typhoon Ondoy, they have resettlement areas like the one in Calauan, Laguna, which were given to the families affected.

HFHP has in turn pledged to raise funds needed to build the homes. Pacquiao assures he himself will take the lead in building the homes, as well.

What make any event a trademark Pinoy party are two elements—picture-taking and singing! After the contract signing was done, my good friend Pops Fernandez, who was one of the guests, asked Pacquiao if he could sing a song, which he gamely did. He sang his trademark song “Sometimes When We Touch” with her.

To the surprise of everyone, the lady of the house, Kit (who sings very well, too) also did a duet with Pacquiao, to Pops’ song “Bakit Ngayon ka Lang.” Jinkee, Pacquiao’s lovely wife, even sang a song, which I am sure was dedicated to her husband, Bette Midler’s “Wind Beneath My Wings.”

Jinkee came with her sister and four kids (two girls, two boys, who ended up playing with the Zobel children. Of course flashbulbs were popping left, right, and center.

When Fernando was asked for his reaction on meeting Pacquiao, he said, “For a person who has accomplished so much, he continues to be incredibly grounded. It is such an honor for the country’s sports hero to lend his name and trust the work that Habitat has been doing all these years.”

I totally agree—he remains humble and sincere despite his fame and fortune. Very few will have the destiny or achieve the status that this man has, and we are proud of him.

On hindsight, what further amazed me was how “vertically challenged” he was, so to realize that this man can pulverize his larger opponents is even more amazing. He is exactly like his new HP phone ad (which can be viewed on YouTube), where he says, “little guys can pack a punch!” And how!

Habitat for Humanity Philippines (HFHP) is a non-profit organization that serves Filipino families in need of decent homes. We bring together partners who share the same vision of transforming lives through building responsible and sustainable communities. Established in 1988, HFHP is a country affiliate of Habitat for Humanity International based in Georgia, USA. Over 22 years, HFHP has served over 32,000 families throughout the country. HFHP envisions that every Filipino family has a decent place to live. Visit www.habitat.org.ph or www.facebook.com/habitatphilippines for more