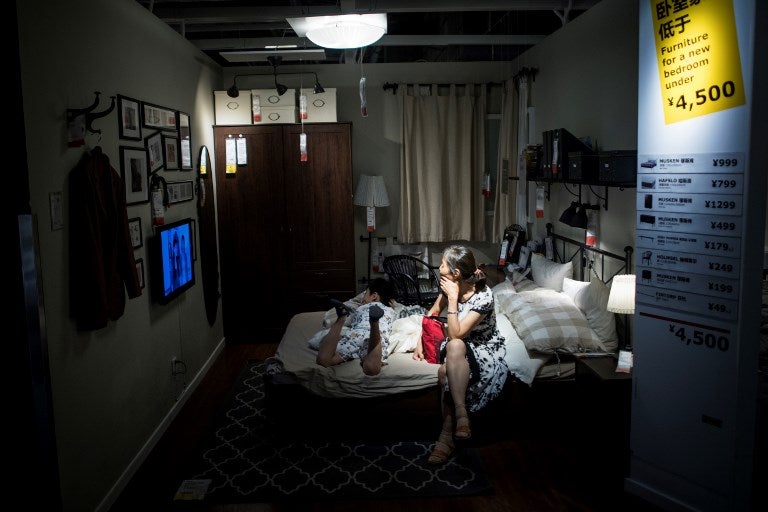 This picture taken on July 5, 2017 shows a mother with her child escaping the summer heat by relaxing on a bed in a Ikea store in downtown Shanghai. According to a local news paper Shanghai Meteorological Bureau recorded a temperature high of high of 36.2 degrees Celsius during that time. / AFP PHOTO / Johannes EISELE

At Ikea, Chinese shoppers make themselves at home

When it’s sweltering in Shanghai, do as the locals do and settle down for a nap at Ikea — if you can find an open bed.

Chinese have a peculiar penchant for making themselves at home in the Swedish retailer’s air-conditioned showrooms, snoozing on beds, dozing on couches, and eating at dinner tables — and the phenomenon is on full display as the sweltering summer sets in.

With the mercury pushing 37 C and outside feeling distinctly muggy, people from all walks of life — children with parents, couples, and the elderly — can be seen lounging and even, somehow, catching a few Z’s amid the crush of shoppers.

Apparently recognizing the potential profit that comes from increased footfall, Ikea has long tolerated serving as a surrogate living room for Chinese consumers, many of whom live in tiny apartments and appear to revel in stretching out on a spacious sofa.

But an Ikea store in Shanghai last year imposed a “no food, no seating” rule in its popular cafeteria, which had reportedly become the chosen venue for many widowed or divorced elderly seeking a romantic match.

Ikea’s Chinese couch potatoes are expected to remain out in force for the time being.

The Shanghai Meteorological Bureau issued a yellow heatwave signal this week, which warns of temperatures climbing past 35 degrees.