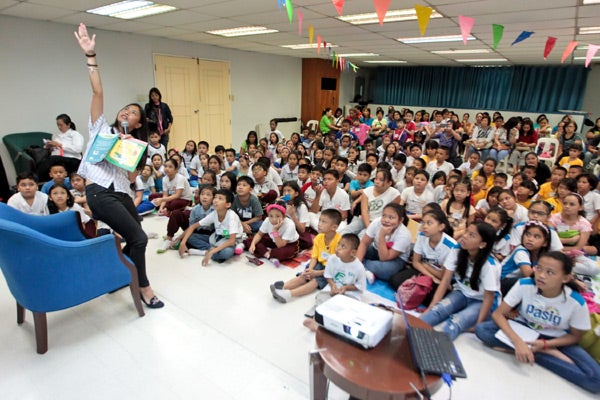 In celebration of nutrition month, tales emphasizing the value of healthy eating and the vitality of traditional Filipino food market were told to some 120 children during the Inquirer Read-Along session at Inquirer main office in Makati on Saturday morning.

Luna took a lively rendition of the story “Ang Ampalaya sa Pinggan ni Peepo” by Joachim Antonio. It is about a boy who learns to appreciate the health benefits of eating bitter gourd, considered one of the least preferred vegetable-fruits among children because of its rather distinctive taste.

Abacan read May Tobias-Papa’s “Araw sa Palengke,” which tells about a young girl’s exciting trip to a traditional wet and dry market with her mother.

Abacan, who is also a licensed nutritionist-dietician, also taught the children participants about achieving and maintaining a well-balanced diet.

Despite her previous storytelling experience with kids, Luna said she felt elated at the positive reception of the children, most of whom vowed to eat bitter gourd from now on.

“The kids were so energetic and I had to boost my energy too so I could catch up with them,” said Luna, who co-leads in the upcoming Cinemalaya film “Requited” in August.

Like the character in her story, Luna admitted she was stubborn to eat vegetables when she was young. “As I get older, I have learned to appreciate eating vegetable as it invigorates my body,” she said.

Inquirer Read-Along is a corporate social responsibility of the Philippine Daily Inquirer which aims to teach love for reading among children. Since then, more than 20,000 children ages 7 to 13 from over 50 cities nationwide have joined the program, which have featured over 400 celebrities and role models as storytellers.

The next storytelling session on Aug. 12 will be held at Inquirer main office in Makati. Interested participants and sponsors may contact Odeng Orolaza at (02) 8978808 loc. 330 or email [email protected].