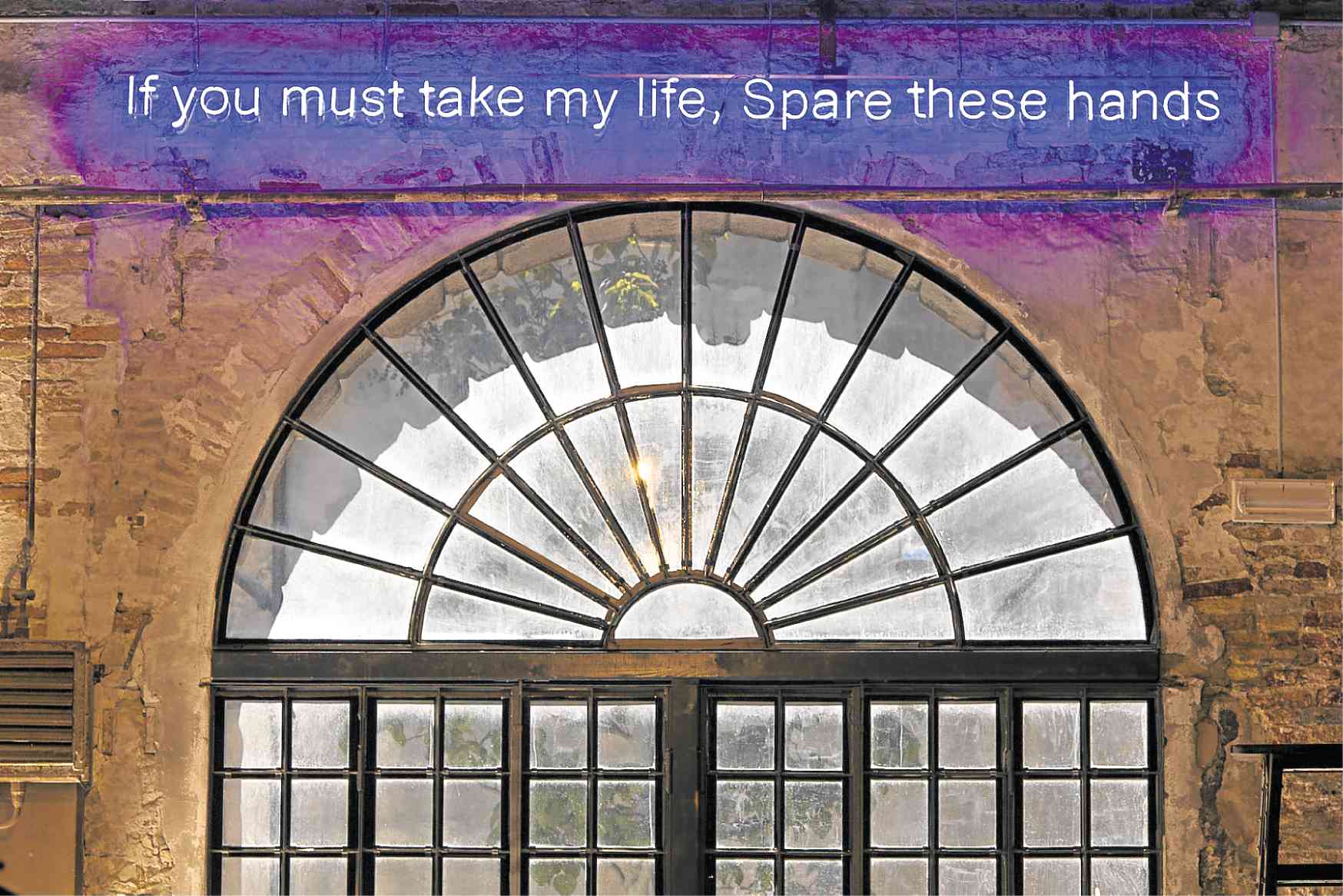 Maestro’s “These Hands” installation pays homage to jobless factory workers in France who became victims of globalization when the jewelry production was transferred to China.

Filipino artists in Venice: Always moving around, in perpetual search

VENICE—As the perpetual host of the Venice Art Biennale, this Italian city easily blurs the boundary between art and reality, fantasy and truth, the mundane and sublime.

Strolling across narrow cobblestone streets and bridges, an observer has to make sense of the dizzying display of created wonder.

This backdrop provides an auspicious setting for a returning entrant to the La Biennale di Venezia, the oldest and most prestigious platform for contemporary art trends in the world.

A large Philippine contingent turned up here last May for the unveiling of the Philippine pavilion at the “Biennale Arte 2017” (2017 Art Biennale), also known as the 57th International Art Exhibition of La Biennale di Venezia.

The country’s pavilion presented “The Spectre of Comparison,” a thought-provoking collaboration of contemporary artists Manuel Ocampo and Lani Maestro.

About 86 nations, including the Philippines, have put up their exhibitions, on display until this November. Collateral events (exhibits outside the main venue) and special projects such as dance, theater, cinema and musical performances are being staged in the duration of the six-month art show.

“The Spectre of Comparison” is a milestone in many respects. The 2017 exhibit ensures that the country’s return to the centerstage of contemporary art in 2015—after a 51-year hiatus—will not be shortlived. This is only the third time that the country has had a presence at the Biennale since its inception in 1895.

The 2017 Philippine participation is spearheaded by Sen. Loren Legarda, with the National Commission for Culture and the Arts (NCCA), Department of Foreign Affairs and Department of Tourism.

The senator had formed a coordinating committee that laid the groundwork for the country’s return to the biennial show.

The significance of this feat was not lost on Italian Ambassador to the Philippines Massimo Roscigno, who described Legarda as the “driving force” behind the country’s return to Venice.

Joselina Cruz is the curator of the Philippine pavilion that showcases the works of Ocampo and Maestro, who have lived and practiced their craft outside the Philippines but maintained ties to the country of their birth.

Cruz said that the “Spectre of Comparison” was drawn from José Rizal’s famous novel, “Noli Me Tángere.” The phrase “encapsulates the experience of Rizal’s protagonist, Crisostomo Ibarra, when he gazes out at the botanical gardens of Manila and simultaneously sees the gardens of Europe.”

As an undocumented US immigrant now living in Spain, Ocampo battled with existential questions dealing with identity vis-à-vis nationhood and colonization.

The Inquirer, with select Philippine media, sat down with Ocampo and Maestro last May 11 for an interview before the vernissage—a private viewing preceding the public exhibition—at the Philippine pavilion.

Ocampo “borrowed” three of his works from the 1990s—“Crème de la Crème,” “Cooks in the Kitchen” and “Twelfth Station”—alongside “Torta Imperiales,” a series of interconnected works specifically made for the Venice Biennale.

Because artists were not allowed to put holes on the walls of the Artigliere of the Arsenale, an old gunnery dating back to 1560 which was restored to become the main exhibition space, Ocampo “decided to do something space-specific,” which, he said, meant “big works.”

One image makes use of the balikbayan box as metaphor for Filipino migration to the US in the 20th century, while another image referenced the US Chinese Exclusionary Act during the mid-19th century that derailed Chinese migration to the West Coast.

Ocampo explained that juxtaposing these images was his peculiar way of “looking critically” at western colonization, while reflecting on the impacts of Filipino and Chinese’ diaspora on the societal milieu of both the colony and colonizer.

Maestro’s art belongs to an entirely different genre. She described her work as “American minimalist.”

“For me, there is already a sense of community in this exhibition space. I feel it’s just a way of respecting what was there before,” said Maestro, who was careful “not to colonize this place, but rather to share our works with what was there before—even those invisible.”

“No Pain Like This Body” is an installation with ruby red neon that brings to the fore the issues of poverty, racism, prostitution and drug abuse prevalent in an unspecified area in Canada.

“These Hands” is a commissioned work originally done to mimic a jewelry factory in France that closed shop. She said the installation was a response to the factory owners’ decision to transfer production to China, resulting in unemployment.

Her other work, “Meronmeron,” is a series of benches that occupies the center of the pavilion. While sitting and looking at the other exhibits with a 360-degree view, Maestro hopes to invite visitors to “pause, to be with oneself alone, or be alone with others.”

Asked about the focus on the rather emotional issues of colonization, migration, national identity and individual and collective freedoms, NCCA chair Virgilio Almario said, “We cannot help it. The colonial experience is really a major portion of our consciousness.”

In a separate interview, Legarda explained that the “Spectre of Comparison” examined the Filipino identity.

“This exhibition questions the processes with which our identity as a nation has been formed, our curious condition as an archipelago of varied languages and ethnicities brought together by this modern construct,” Legarda explained.

“‘The Spectre of Comparison’ ensures that it is impossible for us to comprehend who we are without the painful hauntings of our history. This was the case for Crisostomo Ibarra, for Rizal, and I am sure for Lani Maestro and Manuel Ocampo. These artists are all immigrants, as so many Filipinos are or have been: the West exists as both perpetrator and refuge; the Philippines as the home suddenly ripe for critique.”

As immigrant, Ocampo felt that he was not alone.

Always moving around, he pointed to “the chaos of images, the multiplicity of references” in his paintings.

“It’s a perpetual search,” he said, alluding to the idea of “belonging, or the idea of having a homeland.”

He described the notion of identity as “very layered; it’s always in flux. Like, for example, every time I become legalized in a country, I move away,” said Ocampo, who was an undocumented alien for 10 years in the US.

He went back to the Philippines after he was naturalized as American citizen, but later moved to Spain.

Maestro kept her Philippine passport for 25 years, the same length of time it took her to become Canadian. But, like Ocampo, she moved to a third country, France. She returned to the Philippines after the collapse of the Marcos dictatorship.

It later dawned on Maestro that the “feeling of otherness” was important.

“Once I accepted that, I became free—I could be anywhere in the world and free.

“We’re proud to be here in Venice. But at the same time, because we’ve moved around and became part of other contexts that claimed us, it’s nice being claimed by other people,” she said.

“It’s like sitting on these benches—everyone is included. In the end, countries—they’re names, categories. What is important is how we feel within ourselves, and I think that’s where freedom is found,”

The experiences of these two contemporary artists, which cannot be easily divorced from the search for a Filipino identity amid colonization and globalization, have proven to be an oasis of inspiration for their works that are now on display for the world to see.