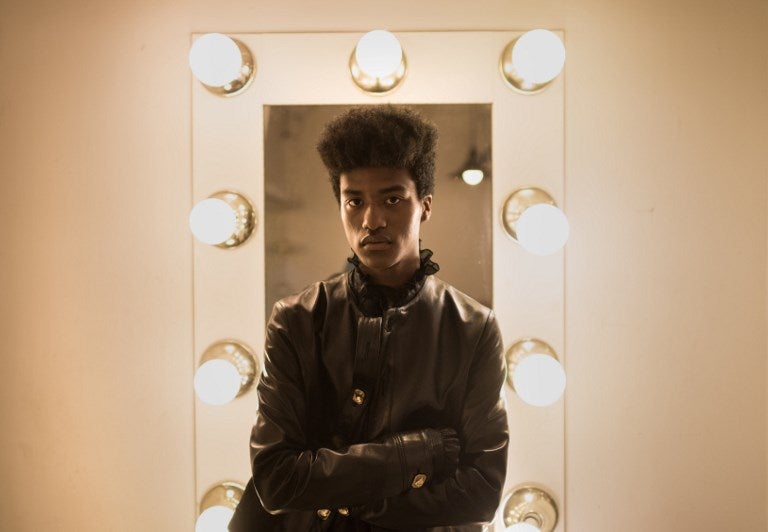 In this photo taken on July 7, 2017, South Korean model Han Hyun-Min poses for a photo following a photo shoot at a studio in Seoul. Teenage male model Han Hyun-Min's long legs and powerful strut have made him a rising star on South Korean catwalks, but his agent knew there would be a problem in the ethnically homogenous country: he is half black. Han, 16, has a Nigerian father in a society where racial discrimination is widespread and people of mixed race are commonly referred to as "mongrels". / AFP PHOTO / Ed JONES / TO GO WITH SKorea-fashion-social-racism, FEATURE by Jung Ha-Won

SEOUL, South Korea — Teenage male model Han Hyun-Min’s long legs and powerful strut have made him a rising star on South Korean catwalks, but his agent knew there would be a problem in the ethnically homogenous country: he is half black.

Han, 16, has a Nigerian father in a society where racial discrimination is widespread and people of mixed race are commonly referred to as “mongrels”.

“A dark-skinned fashion model like Han was unheard of in South Korea, so recruiting him was a big gamble,” said agent Youn Bum.

South Korea has for years sought to foster the image of a modern, sophisticated and tech-savvy nation whose pop culture has made waves across Asia.

But behind the facade of an economic and cultural powerhouse lies a deeply-rooted racism — even as its immigrant population creeps up, doubling over the last decade but still only four percent of the population.

Most foreigners in the country are from China and Southeast Asia, migrant workers or women who marry rural South Korean men unable to find local spouses willing to live in countryside.

Discrimination against them is widespread. Many are openly mocked at public transport for being “dirty” or “smelly”, or refused entry to fancy restaurants or public baths.

A government survey in 2015 showed that 25 percent of South Koreans do not want a foreigner as a neighbor — far higher than the 5.6 percent in the US and China’s 10.5 percent.

Mixed-race children are bullied at school and constantly taunted as “tuigi”, a derogatory term that literally means cross-bred animals.

Many complain of poor opportunities in many aspects of life, including difficulties socialising, getting a job or finding a spouse.

Han was no exception.

“When I was playing with other kids at school, some mothers whisked them away from me, saying things like, ‘Don’t play with a kid like that’,” he told AFP.

He was regularly stared at in public, with an elderly woman once asking him: “What are you doing in someone else’s country?”

“I wanted to become invisible,” he said. “I hated my looks that stand out from everyone else,” he said.

He found his escape in fashion, taking part in modelling auditions and posting his photos on social media until Youn spotted the images.

After seeing the then 14-year-old demonstrate his “electrifying” stride on a Seoul street for five minutes, Youn signed him up immediately.

“Being a fashion model helped build my confidence tremendously,” said Han. “Now I enjoy being looked at by other people, instead of being ashamed or embarrassed.”

He hopes to become a role model for multiracial children. “I want to be more successful, not just for myself but also for people whom I represent.”

The duo were initially stonewalled by designers and magazine editors, some of whom openly dismissed the dark-skinned model as “bad luck” and urged Youn to recruit whites instead.

“Some of them told me, ‘We don’t do dark-skinned models,’ or, ‘For us, non-Korean models mean white models with blue eyes and blonde hair’,” Youn said.

But a handful of designers found Han’s look unique and charismatic, and he hit the runways at more than 30 shows at the two Seoul Fashion Weeks after his debut last year — an unusually high number for a novice.

Han’s slim physique “had a good combination of strengths of both Asian models and Western models” said designer Cho Young-Jae, who used him to display his men’s clothing line, Chaos From Undermind.

Neighboring Japan has a similarly homogenous population, Cho said, but a longer history of immigration and already has a number of biracial star fashion models.

Even so, when half-black Ariana Miyamoto was picked as Miss Universe Japan in 2015 she faced open accusations of not being sufficiently Japanese to represent the country, in a stark demonstration of the limits of acceptance.

South Koreans have until recently been taught at school to take pride in the country’s “single ethnicity”, with one race and language enduring for centuries.

A history of repeated invasions by powerful neighbors China and Japan has amplified the sense of victimhood and rampant ethnic nationalism, many analysts say.

In addition, according to Choi Hang-Sub, sociology professor at Kookmin University in Seoul, Korea’s ultra-competitive culture “worships those with money and power and despises those without”.

“The rule also applies to foreigners,” he told AFP. “So white people from advanced nations are welcomed with open arms, and those perceived to have hailed from less developed nations are relentlessly looked down upon.”

The South has a growing number of foreign or multiracial figures on TV and other public sphere — but almost all of them are Caucasians, whose looks are favoured by many South Koreans as “beautiful”.

Commentators on social media, though, have warmed to Han.

“He has such good aura around him,” said one. “I hope that our society will become more open to people like him.” CBB