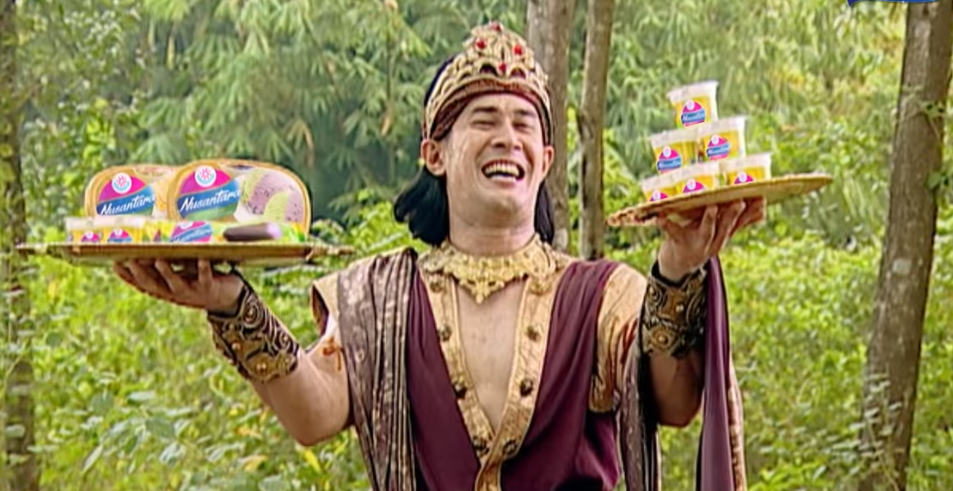 A television commercial of local ice cream Indoeskrim has gained worldwide attention on the internet. The three-minute commercial ranked fifth on YouTube Indonesia’s trending videos list and has been watched by over 800,000 viewers.

Entitled “Kisah Legenda Nusantara” (The Legend of Archipelago), the video starts with a feud between two royal siblings over food. One of the guards grabs a walkie-talkie and reports the fight to the Queen, who immediately intervenes. When she fails to stop the fight, she calls her husband using her intricately adorned iPhone for help. The King, who receives the call aboard a giant computer-generated bird, finds his wife’s location using Google Maps. He then stops the children’s fight by showing them a cabinet full of ice cream.

In an interview with The Jakarta Post, Dimas explained that, initially, his client wanted the ad to be set in a modern house and a family comes in while donning the same costumes and riding horses. However, under his treatment, Dimas transformed the concept.

“I thought that if you want to be nekad [reckless], then you’ll have to do it wholeheartedly,” he said. “So we tricked the viewers in the beginning and give them the twist at the end saying that it was a joke.”

Although the ad makes its viewers burst into laughter, Dimas was very serious during the production process. Inspired by historical sinetron (soap operas) that he often watched on TV, Dimas utilized a DV Cam to create the same tonality as these sinetrons, and cast actors who often acted on similar soap operas.

“I tried not to mess up. In short, I just deconstructed [the sinetron]. If I had messed it up, it wouldn’t be funny,” he said, adding that if he had used different actors, the results would have been different.

However, Dimas, who loves history and antiques, said that he did not intend to make fun of any ancient kingdoms in Indonesia.

Meanwhile, the iPhone, refrigerator and walkie-talkie were props that he added.

“Those are the twists,” he said. “I, as a person who was never [involved] in that [historical soap opera], made jokes using smartphones, refrigerator – they are part of the joke.”

The official Instagram account of humor website 9gag.com posted a short version of the commercial on July 8. So far, it has been watched by more than 9 million viewers and liked by more than 800,000 users. Meanwhile, on Twitter, some netizens highlighted the unique iPhone casing that was used by the characters.

“At first, I thought about it [selling the iPhone case], but it is too receh [shallow],” he laughed, adding that the case now belongs to the director of PT. Indofood Sukes Makmur, Tbk., Axton Salim, who shows it off on his Instagram account.