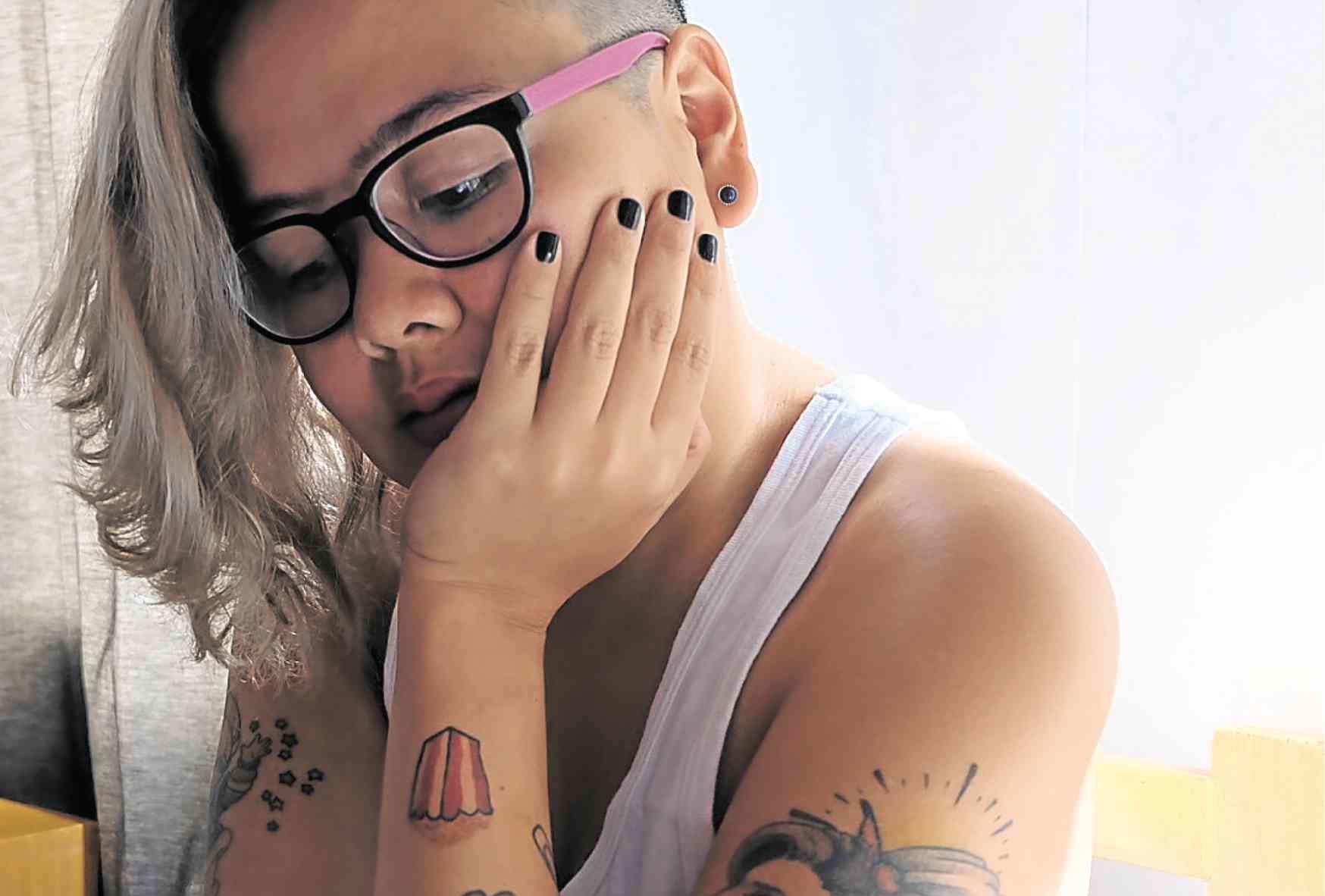 The author and her ink

When I started getting tattooed, my brother expected World War III to erupt. After all, when he came home wearing his first tattoo, our mother cried her eyes out and our grandmother followed him around, quoting verses from the Bible.

However, there was a big difference—he was just 17 when he showed up with a big tribal tramp stamp. I was 35 when I got two tiny tattoos.

So, while he suffered the backlash of waterworks and the Old Testament, all I got was silence.

But things changed when my tattoos multiplied. And multiply they did. (It’s true what they say: Once you start, it’s hard to stop.)

World War III didn’t exactly erupt at home, but there were tears, arguments and middle-of-the-night phone calls. But at least there was no viral video.

Siblings Joyce and Paolo Hernandez pranked their mother by pretending Paolo had gotten his arm tattooed. Their furious mom, who they fondly refer to as “Momzilla,” reacted strongly, not knowing that her children were shooting the whole thing.

But tattoos are no longer stereotyped or limited to certain groups of people.

“It’s really crossed over into every class, age, gender and background,” tattoo artist Michelle Myles said in an interview with The Atlantic.

As early as 2001, Sink & Ink Magazine editor Bob Baxter had written about “the seemingly unstoppable popularity of tattooing.”

“Tattoos now belong to everyone and every group,” wrote Jean Paul-Cluzel, president of France’s Réunion Des Musées Nationaux and the Grand Palais, in The Tattoorialist’s book Tattoo Street Style.

This ancient art, which has roots in cultures all over the world, has become so widespread that some people complain that it’s now “too mainstream.”

But not for parents. And not just Filipino parents.

Tess Morgan (not her real name) tried to come to terms with her son’s tattoo in an essay she penned for The Guardian. She couldn’t speak to him for three days after she found out about his ink, calling it “self-mutilation” and “desecration.”

She wrote: “I keep thinking of his skin, his precious skin, inked like a pig carcass… It’s the permanence that makes me weep… I know I’m being completely unreasonable. This level of grief is absurd. He’s not dying, he hasn’t killed anyone, he hasn’t volunteered to fight on behalf of a military dictatorship. But I feel as though a knife is twisting in my guts.”

It doesn’t seem to matter whether their kids are 18 or 38—a lot of parents feel slighted by their kids’ decision to get tattooed.

Zaza, a 30-year-old chef, has tattoos behind her ear and on her wrists. “My dad wants to erase it using sandpaper. My mom thinks dinudumihan ko ’yung sarili ko.”

While some are open about their tattoos, some choose to hide them from their folks to avoid confrontation.

Holly, a 30-year-old human resources head, has two tattoos on her hips that her parents don’t know about. “They think tattoos are dirty and that when you get old, they’re not good to look at.” She hides them with clothes, even when they’re on the beach. “I just don’t want drama.”

Asked when she plans to tell her parents about it, she said, “Never.”

Even tattoo artists have to face the stigma when it comes to their parents and their own tattoos. “They hate it. They are very traditional,” Sherilyn Santiago said.

Wiji Lacsamana, tattooer,
illustrator and perfumer at Radioactive Mushrooms, said: “My mom prefers me tattooing other people than me getting the tattoo.”

Not all parents hate tattoos, though.

Tasha Santos, digital and public relations executive at Benefit Cosmetics Philippines, said: “I know my mom wouldn’t mind or be surprised that I’ve got tattoos—she knows how obsessed I was with ‘Miami Ink’ and ‘LA Ink.’ I think my mom started appreciating tattoos more when she would watch shows with me that really displayed tattoos as art with emotional meaning for people.
“Sometimes I would show her tattoo designs and she’d be impressed by the intricate details. My dad is a bit more conservative. He never directly said no when I mentioned I wanted to get inked, but his reaction was always, “Why? What do you need them for?”

But her dad got inked with her. “It wasn’t planned. I booked my artist months ahead to do home service for me and my friends, but one friend had an emergency and couldn’t come home to the Philippines on that date… I asked my dad if he wanted to get a tattoo. He asked me if it was painful, I told him that it was tolerable and that I don’t find it painful. He agreed to get a tattoo and asked for a dragon—he wanted something simple and will take only an hour or two to make.”

Ruby Gan, entrepreneur, marketing VP and mother of two boys, has five tattoos of her own. Her sons have tattoos, too. “I really don’t mind as long as the designs are nice and not scary. I would say tattoos have evolved so much already. The artists are so good, they can create watercolor designs and they look very pretty.”

She said that when it comes to her boys’ tattoos, her rules are simple: “When they told me that they wanted to get their tats, I told them to really think of the meaning of each design. Luckily, their ideas were translated beautifully by the very talented Wiji.”

She was with her son Martin when he got his first tattoo. She even got inked with him. And when her other son Ralph got his first, Martin was there for support. “It’s a family affair, indeed,” she said.

As for me, the idea of having tattoos becoming a family affair still seems remote. “I am not asking you to love them,” I wrote in a letter. “I am not even asking you to think they are pretty. But I am asking you to accept that this is not something we will ever agree on. I would like for this to not drive a wedge between us… When I decided to get tattoos, it not something I did out of spite for you. They make me happy.”

But maybe things could change one day. Maybe we could even get matching tattoos.