Might this new resto be the best Japanese experience in the city? | Inquirer Lifestyle ❮ ❯ 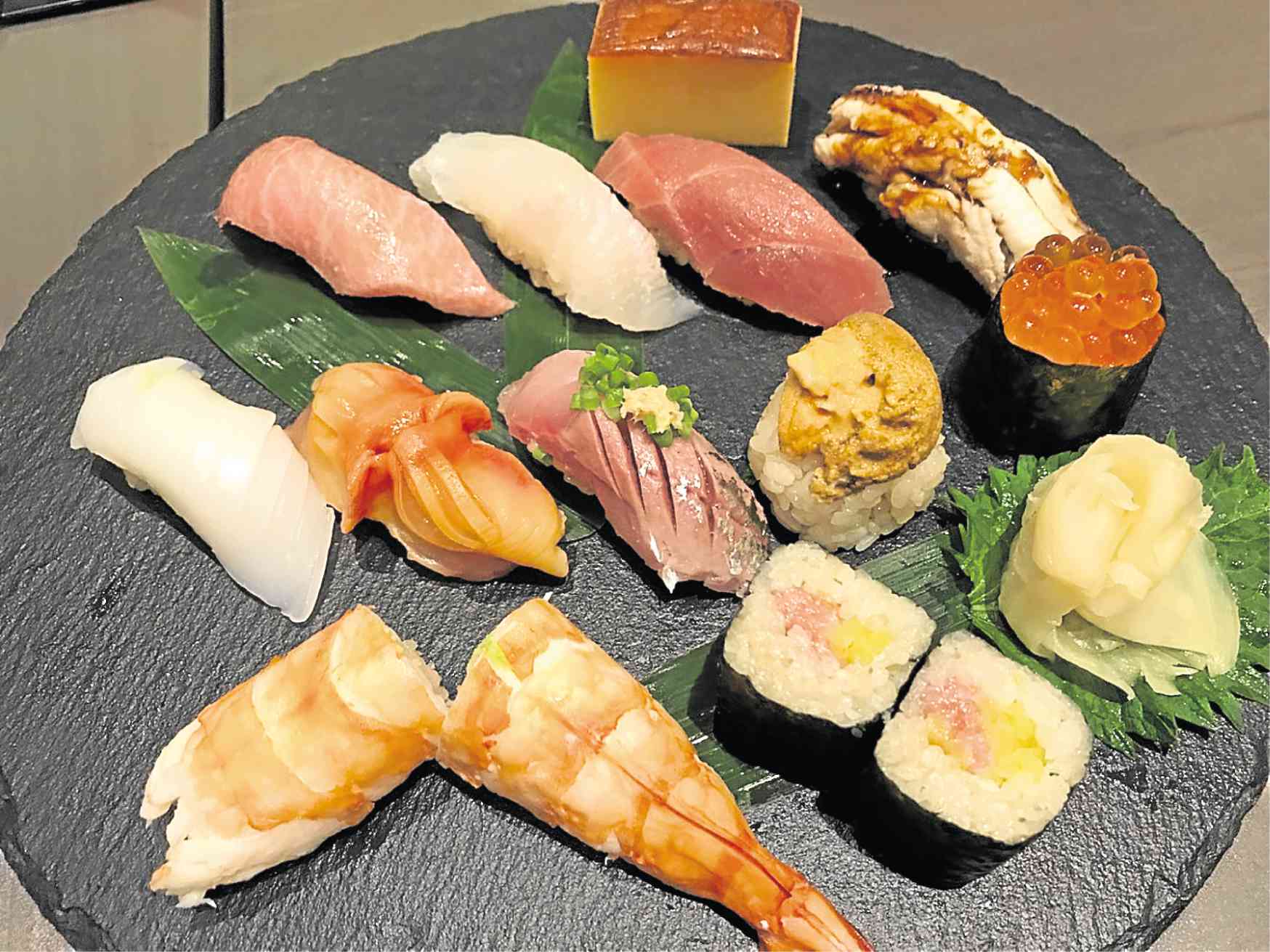 Might this new resto be the best Japanese experience in the city?

There was a time, when I was working at Rogue Magazine, that there were few places to eat along Chino Roces Avenue Extension (formerly Pasong Tamo). It was Pancake House every day—the food delivery messenger already knew who in the office was having the tacos and the Salisbury steak.

Those who missed the Pancake House group order would most likely end up with cup noodles from 7/11 in the building next door.

On the nights when we finished the magazine’s issue for the month, our dinner choices would get more and more outrageous: burgers from Lusso, or a sushi platter from Seryna.

It’s probably a good thing for my wallet that I don’t work there anymore, because Chino Roces is now the new restaurant row.

The fun starts, of course, at Karrivin Plaza at the far end, with Toyo Eatery, and the Moment Group’s headquarters-cum-cafeteria, The Mess Hall. There’s also M Dining and Txanton, Terry’s Selection, and now, Kazunori, in the building where the Mazda showroom is.

We spent 10 minutes looking for it because they gave a building number but, frustratingly (in appropriately Japanese fashion), no buildings have their numbers marked, so we cruised up and back down, until we ended up phoning them.

So, I’ve just saved you about 10 minutes. It’s the same building as the Mazda showroom.

Kazunori has to be Elbert Cuenca’s most ambitious project yet. Building on the success of his draconian ramen joints where there are no reservations, no takeout, no cutlery for children, but excellent ramen, Kazunori is whole-hog Japanese. You have the sushi and sashimi, the fried stuff, rice meals—almost everything that Filipinos expect to find in a Japanese restaurant.

There are several seating areas, and little touches such as an enclosed bar area that remind you that this place has the same proprietor as the Riedel Room at Elbert’s Steak House.

But this is not Kimpura. I know that everyone is waxing nostalgic for Kimpura at Greenhills, but, really, childhood memories aside, the place was a dump. Kimpura Makati is not much better—everything feels slicked with a light film of grease, including the ancient and brusque waiters’ balding scalps.

Sashimi was hacked, rather than sliced, in haphazard fashion. Tempura was a soggy sponge of oil. And the sukiyaki tasted like boiled moccasins in a broth made from yesterday’s trimmings. We were surrounded by families eating the same tired, uninspired dishes from the 1990s, when Kimpura battled it out with Saisaki’s popular unlimited prawn tempura promos.

A generation later—and importantly, a generation which has benefited from Japan’s relaxed visa policy for Filipinos and a devaluated yen—we’ve become much more knowledgeable about Japanese food.

There will always be a need for what we might call family Filipino-style Japanese restaurants, with Sugi at the head of the pack—and I actually do enjoy myself at Sugi, where I already know what I’m going to order because I’ve been having it since high school.

And there will always be the mysterious hole-in-the-wall places where Yakuza types disappear into a back-room, the menu is on a whiteboard in Japanese script, and the waitresses pick their toes while chattering among themselves and give you general recommendations: “Mahilig sila dito. Isda. Maasim-asim.”

Kazunori is a Japanese restaurant for Filipinos who have been to Japan. They’ve watched “Jiro Dreams of Sushi,” they know that you’re not supposed to wipe down your entire upper body with the wet towel, and they click on links about how you’ve been eating sushi wrong your whole life.

They know that good meals in Tokyo don’t have to be A5 wagyu or otoro sashimi, that a good donburi bowl can be immensely satisfying in its own way. I’m technically part of that generation, but haven’t explored the back alleys of Tokyo and Kyoto the way many of my contemporaries or younger set have.

The food at Kazunori is excellent, with meticulous attention to detail and service that Cuenca’s restaurants are known for. I’ve always said that all Filipinos going to Japan on holiday would force the local restaurants to have to level up, but Kazunori is the first real evidence of this happening.

Is it as good as Japan?

That’s a difficult question to answer, because context is so important. Is it the best Japanese restaurant in the city? I haven’t been to all of them, and there’s a strong possibility I wouldn’t know it when I saw it, because my palate isn’t advanced enough.

What I can say for sure is that those who’ve eaten out in Japan will not be disappointed eating here, and that’s a pretty tall order. Even a simple bowl of tendon or a kakiage is meticulously prepared. Ika nigiri is soft and yielding, on a ball of rice compacted just so. (My personal tastes would have the rice more acidic, but that could be just me.)

The restaurant is still on soft opening, which means no credit cards, but thankfully it takes reservations. Since we ate through nearly the entire soft-opening menu, the only thing that still needs a bit of work is the mentaiko pizza—something went wrong with the crust.

Otherwise, this might just be a contender for the best Japanese experience in the city. —CONTRIBUTED