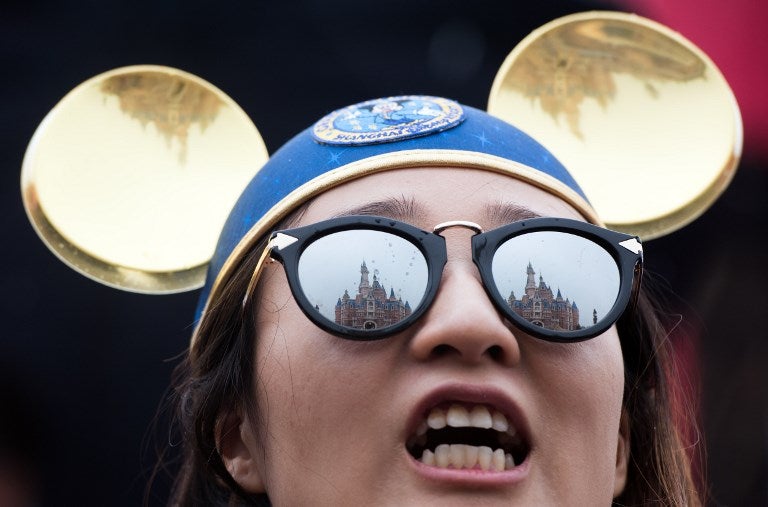 The Enchanted Storybook Castle is reflected in the sunglasses of a girl during the opening ceremony of the Shanghai Disney Resort in Shanghai on June 16, 2016. Entertainment giant Disney brings the ultimate American cultural concept to Communist-ruled China on June 16, opening a massive theme park in Shanghai catering to a rising middle class. / AFP PHOTO / JOHANNES EISELE

LOS ANGELES, United States — Over nearly a century Disney has exported US culture across the globe, but the company was astonished to find one slice of Americana wildly popular in China — the turkey leg.

“If you go to Disneyland or Disneyworld, we sell gigantic turkey legs — they’re like the size of my arm,” Bob Iger, chairman and CEO of the Walt Disney Company, told reporters on Wednesday.

“And when I heard we were putting them on the menu in Shanghai I thought our group was crazy. Why are we selling turkey legs in China?”

Iger was quickly proved wrong, however. Glazed in a special Disney-recipe hoi sin sauce, thousands of the turkey legs began selling every day.

“We were there a few weeks ago for the anniversary and we sold 4,500 in one day. We couldn’t buy enough of them,” Iger said at a panel for the international press in the company’s Burbank, California, studio lot.

Demand for the juicy snack quickly grew to 4,000 units a day in Shanghai alone — more than Disney’s Polish supplier could manage — and buyers were sent to track down more of the poultry legs in South America.

“That surprised us, and there were other things about food that surprised us — not bad, by the way, just things that we had to adjust to,” said Iger.

Shanghai Disneyland  — Disney’s sixth theme park and third in Asia — pulled in nearly a million visitors within its first month of operation.

From the traditional peony flower on the castle to murals that replace the animals of the Chinese zodiac with Disney characters, the company is aiming to be culturally aware.

Incorrect rumors that the turkey legs sold at its theme parks are actually emu meat have circulated online for years, boosted most recently by March 9 segment on TBS’s “Conan” talk show.

In fact, they look bigger than normal turkey legs simply because they are from the male and not the female Americans are used to seeing in their traditional Thanksgiving meals. CBB