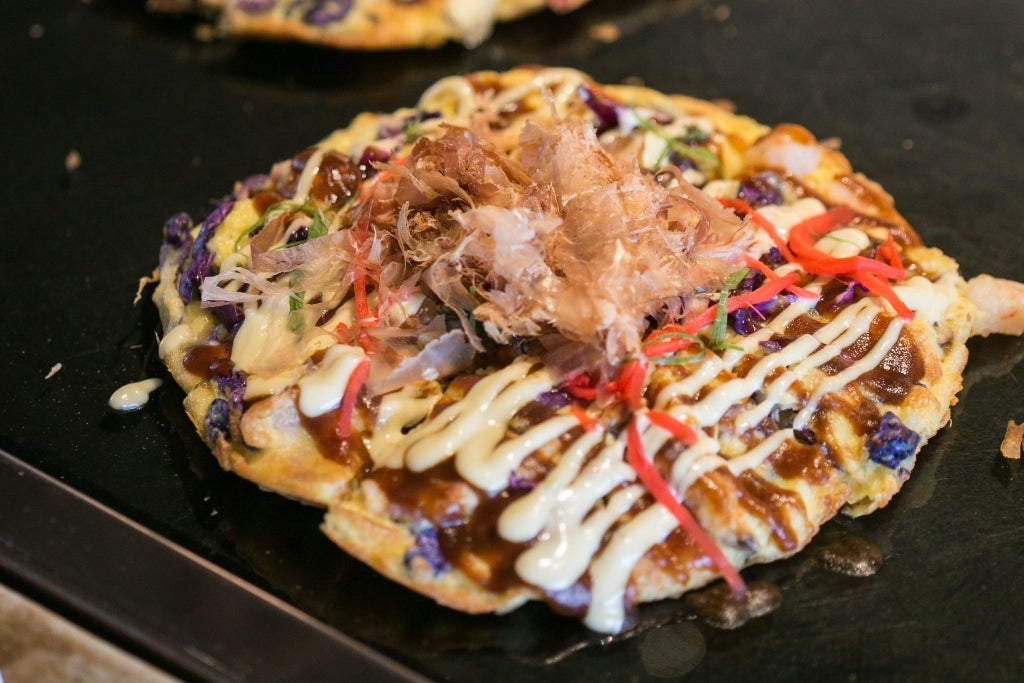 Where else can you get customized okonimyaki (Japanese pancake) served pizza-style?

Like its predecessor Nobu Las Vegas, which is part of the Caesars Palace casino resort complex, Nobu Hotel Manila is within the City of Dreams (COD) gaming destination. More than gaming, COD promotes itself as a dining and nightlife destination.

Flanked by Hyatt COD and Crown Towers, Nobu sets itself apart with a modern nod to Japanese culture and subtle drama. Nobu’s poolside and guest floors are a soothing sanctuary, a refuge from the hustle and bustle of the city.

The suite—like all rooms in the hotel—transports you from the overcrowded city life  into a well-appointed Japanese retreat. Nature is brought indoors through sleek plants and glass walls that display landscape views and welcome the sunlight.

In place of a colorful floral arrangement are fresh white or purple phalaenopsis orchids that exude simplicity and calm. There are no heavy draperies, just delicate patterned shades.

A dividing wall between the living room and bedroom is covered with mottled matte gold, suggesting the translucency of a shoji screen found in most Japanese homes. Carpets are woven with origami patterns while the bedroom’s accent wall is painted with cherry blossoms.

The suite’s neutral earthy tones evoke the wood and stone finishes of a Japanese house, lending a calming effect.

In the bathroom is a black marble top and state-of-the-art cleansing seat with intuitive controls to make hygiene rituals a pleasurable experience. The toiletries, from Natura Bisse, a Spanish luxury brand, exude a white tea and rosemary scent. As in other luxury hotels, Nobu offers more amenities such as evening moisturizers and makeup cleansing pads.

Every detail defines luxury—the quality of the note pads, the plush bathrobes, thong slippers, a black minimalist mini bar stocked with premium spirits and the coffee machine that comes with gourmet coffee pods.

The hotel staff welcomes you with a tray of artfully plated, delicate, mildly tart Yuzu pound cake and a chewy cookie with sake. Nobu’s signature black orchid tea is served in a  simple white cup and wooden saucer, with a fresh orchid as a delicate touch. Yet another staffer brings in another spray of fresh orchids. The fruit bowl is replenished the next day.

At the Nobu Lounge, which maintains the Japanese aesthetics of sheer drapery and woods, the food is served in lacquer bento boxes.

The access on the second floor leads you to the heart of the complex—more gaming tables and slot machines, 20 restaurants such as the popular 24-hour Red Ginger, known for modern Asian cuisine; DreamPlay, the world’s first interactive Dreamworks-character-themed park; Pangaea Ultra Lounge and CenterPlay for live gigs.

Barong-clad security staff is all over the complex assisting guests who are overwhelmed by the maze.

“When Nobu opened in 2013 in Las Vegas, it was a hit. We wanted to take the elements from that hotel and do it even better than Vegas. Our primary market will be guests from South East Asia.

“Nobu may have a look of a hotel, yet it has the feel of an integrated resort with lush flowers like orchids. It’s a shame to shortchange guests’ expectations. It’s all in the details.”

All Nobu hotels and Nobu restaurants are supplied by Ikaati, hand-tied artisan organic  tea, in collaboration with herbalists, perfumers and tea masters.

For local flavor, Nobu Manila’s chefs developed the Yuzu cakes, pies, cookies and desserts which are exclusive to the hotel.

Nobu restaurants are famous worldwide for the influence of Matsuhisa, the classically trained chef who lived in South America and fused Japanese-Peruvian cuisine.

He recommends the signature omakase (which means “I’ll leave it up to you,”)—a dinner set of customized Japanese-Peruvian cuisine that aims to surprise guests.

Hirsh adds that the restaurant likes to “Nobu-fy” local or popular staples, infusing them with Japanese elements such as sinigang with shiro miso, lugaw (porridge) bar that includes edamame beans and soft tofu, palabok udon, and  chicken inasal with Nobu marinade for Sunday brunch.

The okonomiyaki, a Japanese pancake, is plated like a pizza. If you’re vegan or on a diet, the chef can customize the recipe according to your sensitivities and even scale down the serving size.

One of Nobu’s signature dishes, White Fish Tiradito, is popular. The tiradito is a Peruvian dish similar to kinilaw and sashimi. Delicate slices of raw white fish are fanned out on the plate and highlighted by citrus and chili.

The 321-room Nobu Manila is relatively large for a luxury hotel, which is usually half the size. It has been listed in Forbes magazine’s list of celebrity hotels that made guests feel like  stars.

“We want to communicate that this is a world-class establishment in the services, entertainment, food and beverage, comfort level of the guest rooms,”  says Hirsh.

While the average length of staff training in a hotel takes three months, Nobu Manila’s staff underwent six months of rigorous preparation. “They have been taught to anticipate our guests’ needs whether implied, understated or unexpressed. We train the staff to look at the body language and pick up the guests’ habits. They’ve become good in attending to their needs.”

Having worked in Thailand, the Caribbean, the Middle East and Indonesia, Hirsh praises the Filipino staffers who he believes are second to none. “English is widely spoken here unlike in other countries. The Filipino hospitality is innate. They are willing and proud without the arrogance.”