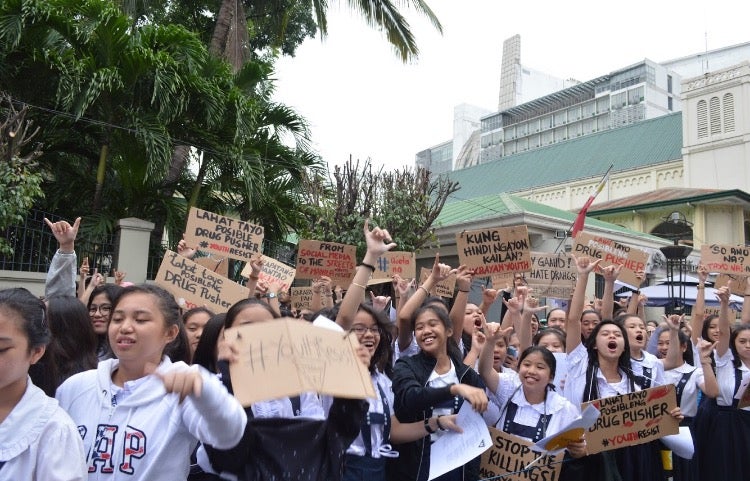 On July 18, hundreds of students filled Leon Guinto Street, Manila, to protest President Rodrigo Duterte’s “year of killings,” or the reported 7,000 extrajudicial killings that have resulted from his controversial war on drugs.

Dubbed National Day of Youth Resistance, the #YouthResist movement led by the Millennials Against Dictators (MAD), Student Council Alliance of the Philippines (SCAP) and Akbayan! Youth staged an alternative Sona (State of the Nation Address) at St. Scholastica’s College (SSC), Manila, less than a week before the President’s own Sona on July 24.

Students took to the streets singing “Do You Hear the People Sing?” from the Broadway musical “Les Miserables” and the pop hit “Where Is the Love?” by the Black Eyed Peas—both of which have become anthems of freedom and self-expression.

Volunteers from SSC and other youth groups from various universities and organizations also attended the movement.

Shibby de Guzman, the ninth grader from SSC who heads the movement, emphasized that the event was not a rally, but rather, a more peaceful and intellectual approach to protesting the extrajudicial killings.

De Guzman also called for healthy discussion, not an aggressive debate, because the latter (whether done face to face or through social media) will not result in change.

“You have to approach everything with love, especially if you’re fighting for your country,” she said.

Sen. Risa Hontiveros, a Scholastican herself, visited her alma mater to express support for the movement. She also praised the youth for courageously going beyond social media and speaking up in public.

“We stand here today to tell the government that the millennials are watching. You are not blind. The youth are not fooled by fake news in social media,” Hontiveros said.

The movement does not end here. On the day of the President’s Sona, the group will hold a vigil at San Antonio de Padua Parish along Singalong Street, Manila, from midnight to 2 p.m.

Shamah Bulangis of Akbayan! Youth said the organizers are looking to increase the number of the movement’s supporters. They are convinced that if the youth work together, they can pave the way for a better future.

“We remain after the people older than us have faded into history,” said De Guzman. “When all the people responsible for our current problems have gone, we are left to fix them. We remain when their generation has faded.”