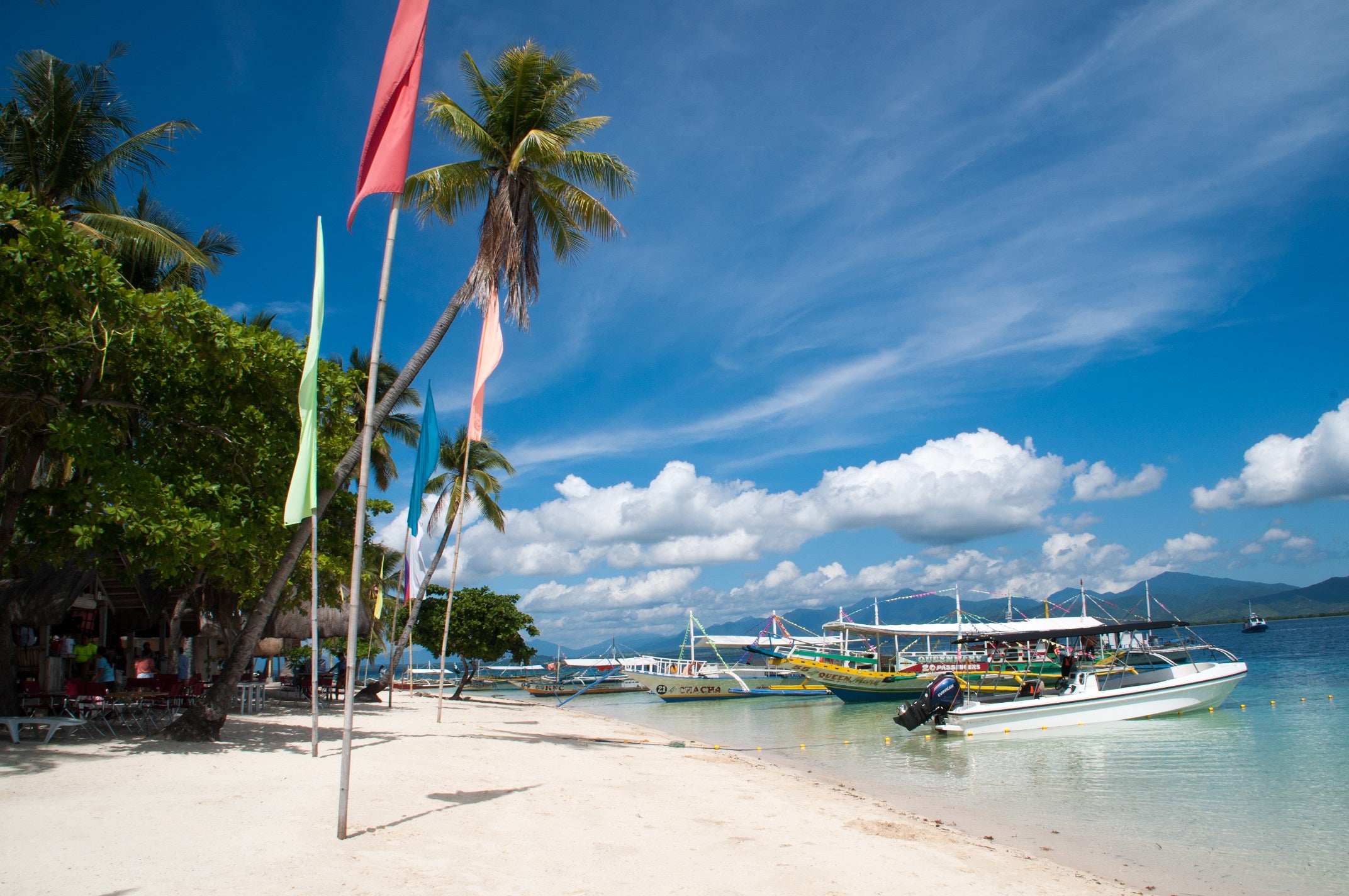 Hue Hotels and Resorts Palawan is a boutique hotel with a hip vibe.

Run by property management group, Hotel Innovators Inc., it promotes natural and cultural attractions to guests who want to immerse in the environment.

One feels a sense of place in the 120-room hotel in the heart of bustling Puerto Princesa.

From the open-air lobby, one side faces a giant acacia tree where the twitter of birds mutes the street noise. The floor bears patterns of mangrove trees that are protected in the city.

A metal flock of indigenous birds, balinsasayaw or nest swiftlets, and a mat-woven counter, adorn the front desk. The rooms make use of banig, an indigenous weaving craft.

The ballroom is decked with giant birdcage lighting fixtures which, according to the design team, are a “wink” to the flock of swiftlets in the lobby.

The infinity pool leads the eye to an unobstructed view of the city. The colorful geometric patterns of the pool tiles echo the flaglets or banderitas of the local fiesta.

Each room has Palawan staples of calamansi juice, rice coffee, pastillas, tamarind chews and cashew. VIP guests are gifted with pearls for the ladies, and sungkaan for the men.

“It’s an advocacy of the owners and managing directors, Dexter and Dennis Lee, to build hotels that support the locality,” Guballa said.

Majority of the hotel employees come from Palawan. The hotel has been holding mini bazaars featuring local products.

In keeping with Puerto Princesa’s image and reputation as a green city, Hue has a reverse-osmosis treatment plant that purifies the water. Guest rooms are stocked with purified water in refillable glass bottles instead of plastics.

“We don’t want to contribute to the waste and have them pollute the rivers and water,” said Guballa.

He added that Hue’s resort ambiance provided an escape in itself. The rooms and the poolside are spacious and the service is heartfelt. And there are escape tours that visitors look forward to.

“It’s commonplace for people to come to Puerto Princesa as a jump-off to the Underground River,” he said. “This hotel is a destination in itself. You can stay for three nights and have a relaxing vacation while enjoying the tourist spot.”

While Puerto Princesa Subterranean Park is 80 kilometers from the city, Hue organizes city and beach tours which are more accessible.

During this media tour, our first stop is dinner of local dishes in a nipa hut along Iwahig River, followed by firefly watching. The tour guides recount a scripted history of the neighboring Iwahig Penal Colony, a settlement for prisoners, which has likewise become a tourist spot.

Trained boatmen and guides educate guests on the biology of fireflies and the stars. Jonathan, our paddle boatman, explains that fireflies are not flies but beetles. Hence, it’s more accurate to call them luminous beetles.

The following day, we drive down the tree-lined avenues of Puerto Princesa, which lives up to its name as “The City in a Forest.” Instead of seeing buildings and traffic-clogged streets, we view silhouettes of mountains and green fields. Our guide Joe explains that the forest is just 10 km from the city center. Neighbors are distanced by 1 km.

Our planned tour is Honda Bay with a picnic in Isla Pandan.  Joe says the water got its name from hondo de agua which means sudden depth of water. In the islet called Splash, we stop to feed the fish, look at the horseshoe crab, endangered species known for its medicinal values, and be entertained by a dive act.

The Honda Bay tour is highlighted by Isla Pandan, managed by the Legend Hotels chain. The island, named after the native screwpines, is said to be one of the better developed resorts, with clean facilities, fresh seafood platters and less density. Visitors have the option to see the mangrove, snorkel to enjoy the marine life and corals, and do water sports.

“If you are fair-skinned, you might be kissed by the fish. They could mistake you for bread crumbs. They are not attracted to chocolate crinkles like me,” said our guide in jest.

Jun Fuentebella, chief operating officer of Legend Hotels International Corporation, said that since Puerto Princesa Subterranean River National Park became a Unesco World Heritage Site, the province has become stricter with tourism development. His company had to follow the Department of Environment and Natural Resource’s extensive list of rules in hospitality development including sanitation, preservation of nature and giving back to the local community.

“The whole world is looking at Palawan,” he said. “It’s better to develop now and learn from the mistakes of other destinations.”

En route to the hotel, we stop by Viet Ville, a vestige of the former Vietnamese refugee camp that has become a popular restaurant. The nipa hut-style restaurant is said to offer the crustiest baguette in town, the famous noodles and baguette sandwiches.

Then again the staff goes the extra mile and takes us to places outside of the itinerary. The ranch of former Speaker of the House Ramon Mitra Jr. is perched on the slope of  Sta. Monica Heights. The tropical, open-air pyramid-shaped house overlooks the valley and Honda Bay. People come to sit on the slope and watch the horses grazing.

The house is a short drive to Baker’s Hill, famous for the ube hopia and tuyo pastillas. The attraction isn’t just the desserts but also the pizza and snack houses and the viewing deck.

The garden and theme park are littered with hearts, kitschy slogans,  and statues of cartoon characters.

The media tour ends with a dinner at Hue’s Matiz, the only  Spanish-Filipino restaurant in the city. The locals are delighted that they can now enjoy paella without having to fly out of the island.

Located in Langogan Valley, the farm flourishes with fruit and coffee trees. It is one of the few farms in the world where the civets roam freely. During coffee season, the wild civets, called binturong, and the musang, eat the cherries from the coffee trees.

Some 200 locals are employed to collect the droppings on the forest floor. They are cleaned and roasted in a machine following the process that meets export standards of sanitation. It’s also one of the few farms in the world that cultivate the endangered liberica bean variety.
Sabuya supplies several hotels including Hue. One teaspoon of the coffee emits light floral notes while a stronger brew sends off dark chocolate flavor with middle notes of caramel or butterscotch. The best part is that  hyperacidic stomachs don’t suffer any reflux.

Although this is a short visit, we have our fill of souvenirs and memories. The hotel staff’s welcome is as warm as its parting words: “Nice to meet Hue.”