The search for Nick Joaquin’s one and only screenplay | Lifestyle.INQ ❮ ❯ 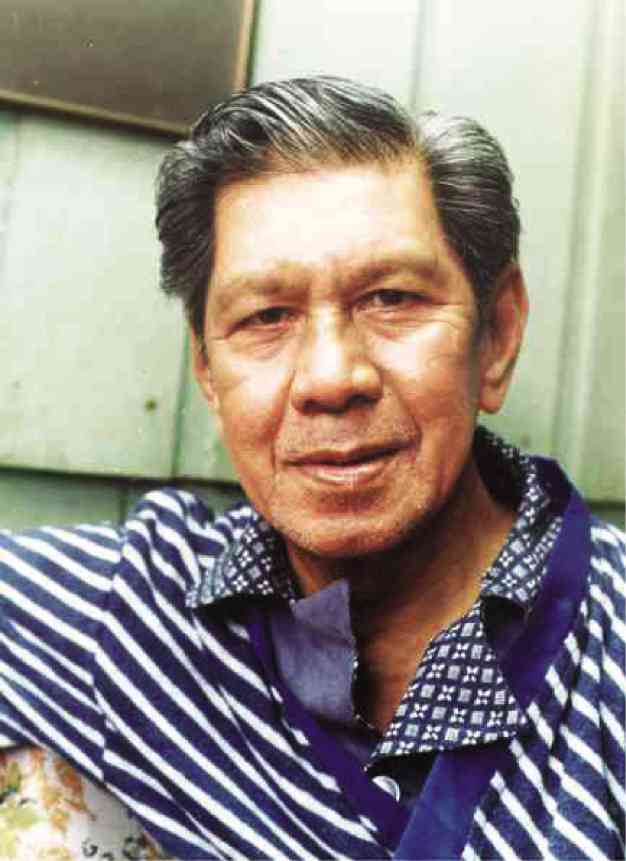 The search for Nick Joaquin’s one and only screenplay

National Artist for Literature Nick Joaquin is known for his novels, short stories, poems, essays, reportage and plays, but once upon a time, he tried his hand at scriptwriting and apparently didn’t like it.

“It won Best Director for De Leon and Best Actor for the male lead, Ben Perez, during the first Famas Awards in 1953,” Co said.

There was another contender, then journalist Benigno “Ninoy” Aquino Jr., who wrote the script for National Artist for Film Lamberto Avellana’s “Korea.” It was based on Aquino’s experience as news correspondent covering the Korean War.

Co said he learned about Joaquin being credited as scriptwriter of “Bagong Umaga” when he helped Lino Brocka in putting up the Gerry de Leon Retrospective in 1982 at the Manila Film Center, the same year De Leon was posthumously given the National Artist Award. De Leon died in 1981.

“It was one of our researchers, Vic Delotavo, who discovered it and relayed it to me. But we can’t find a copy of the film,” Co said.

Whereas “Sawa sa Lumang Simboryo” has available copies in various formats—now it can be found on YouTube—even a poster or still shots for “Bagong Umaga” can’t be found.

When Co bumped into Joaquin at a bookstore on Recto Avenue in Sampaloc, Manila, sometime in the mid-1980s, he dared ask about “Bagong Umaga.”

“Nick Joaquin was buying copies of his ‘Reportage’ books, which were put on sale, at that National Book Store branch on Recto. I was with a female friend, fellow film archivist Amelia Manalo, who knew Nick Joaquin because she used to be an assistant for Virgie Moreno. Nick invited us for beers in a nearby girlie bar. It was still closed because it was only around 5 p.m., but Nick asked the waiters, who were still tidying up the place, to open it. They did and served us beers. After one round, I had the courage to ask him about ‘Bagong Umaga,’” Co continued.
“He got angry and went on ranting about it. He hated the film, describing it as very bad,” Co said.

From what Co remembered of the encounter, Joaquin said he wrote the original script in English and De Leon asked another writer to translate it in Filipino, with input from De Leon.

The shooting script in Tagalog turned out to be not a mere translation, because there were changes in the plot that veered away from what Joaquin had intended. Joaquin didn’t give the name of the translator, but Co remembered him as equally fuming mad over De Leon.

Until now, it is common practice that a script submitted to a major production outfit be subjected to a lot of revisions based on the director’s, producer’s and sometimes the lead actors’ inputs. This process Joaquin, who was then a published short-story writer, playwright and poet, apparently couldn’t accept.

Coincidentally records show his most enduring play, “Portrait of the Artist as Filipino,” was published as a series in Weekly Woman’s Magazine in 1951. “Bagong Umaga” came out a year later, so there’s a possibility he wrote the screenplay around the same time.

It is probably for this not-so-nice experience in scriptwriting why the 1965 film adaptation of “Portrait” was directed by Avellana and the scriptwriters were Donato Valentin and Trinidad Reyes.

Did Joaquin try to forget it like a bad dream? His closest writer-friends and family members have been oblivious to what could probably be “the one and only Nick Joaquin screenplay.”

Many were surprised when Co first brought this up during the evening informal forum on Joaquin’s life and works titled “Small Beer,” as part of the Cultural Center of the Philippines’ centennial tribute, “Nick Joaquin, He Lives!” on May 4.

Even José “Pete” Lacaba and Charo Joaquin-Villegas told us it was the first time they had heard of it.

Surprisingly one person in the hall saw “Bagong Umaga” during his younger years and echoed Joaquin’s sentiment.

“Yes, I saw it, and from what I remember, it was a very bad film,” National Artist for Literature Bienvenido Lumbera said. Lumbera admitted he didn’t know until Co brought it up that it was Joaquin who wrote it.

“I remember it was about a teacher from the city who went to a barrio. Boring story,” Lumbera told us.

From a review titled “’Bagong Umaga’—A Social Commentary” that appeared in the Sunday Times Magazine, Oct. 25, 1952, and written by one of its associate editors, National Artist for Literature F. Sionil José, the movie is about “the hardships of a sugarcane plantation worker which are mostly financial in nature and how he finally solved them by working for the establishment of union in the plantation.”

José described it as “a propaganda film, semi-documentary in style and treatment.” José added the story was “plain, devoid of blood-and-thunder melodrama.”

What could have probably earned the ire of Joaquin was that, despite the changes in his story, he was still credited as the only scriptwriter and critics like his friend José didn’t like the final product.

There are no available records to determine how much changes were made in Joaquin’s original story and who was the uncredited translator-scriptwriter in Filipino.

Co’s rebuttal: “But what’s important is Nick Joaquin was directly involved in making a film in his early years,”
And though Joaquin hated the outcome, it is still credited to his name, directed by a future fellow National Artist.

“A library in the US,” Co said. “I can’t divulge where exactly, because we’re in the process of confirming it. Abangan.”—CONTRIBUTED