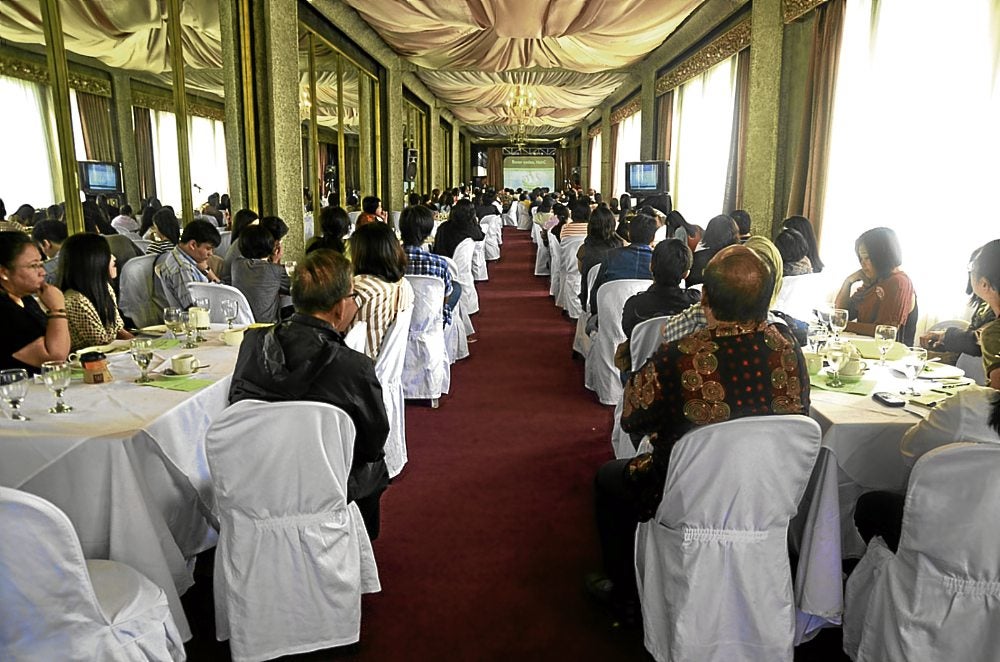 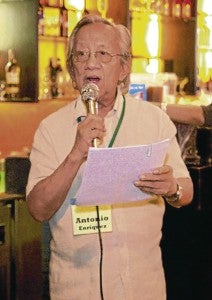 What do you get when you gather poets, playwrights, essayists and novelists in one room to tackle the issue of climate change?

You get words, lots of eloquent words.

But the sense of portent was balanced by words of optimism, such as “survival.” In fact, the conference tried to balance pessimism with optimism. It was not for nothing that the theme of the congress was “Archipelagic Feasts, Tropical Disasters: The Literature of Survival.”

In his keynote speech, veteran fictionist Rony V. Diaz tackled climate change and evoked the specter of ecological collapse because European governments had not done anything about something they had recognized during the climate-change summit in Copenhagen—that the average global temperature should not rise more than 2°C above preindustrial levels by 2100, and greenhouse-gas concentrations in the atmosphere beyond 450 ppm.

“What are the likely impacts of this failure?” Diaz asked. “The most worrisome for the Philippines is the calculations of glaciologists that an increase of 2°C would hasten the melting of ice sheets in Greenland, the Arctic and West Antarctica. Together, they hold enough water that, if melted, would raise sea levels from 12 to 15 meters. Two hundred million people live within one meter of present sea levels, including eight of 10 of the world’s largest cities.”

In short, the Philippines would go under.

Diaz urged writers to use the power of the pen to urge governments to implement measures to check carbon emissions.

In one panel, fictionist in Filipino Abdon Balde Jr. offered a more practical measure—for writers to cut down on using products that contribute to greenhouse-gas emissions.

Balde said several environmental experts believed global warming was part of a 1,500-year weather cycle and that the Earth had experienced much worse during the Middle Ages when automobile had yet to be invented and oil was yet to be discovered.

But while there may be disagreements, there’s nothing wrong with taking cautionary steps so as to prevent disasters arising from climate change.

As a first step, the Philippine PEN’s 54th Congress passed a resolution calling for measures “to bring down greenhouse-gas emissions in order to stem climate change and its disastrous effects on the biosphere.”

“Taking the challenge made by writer Rony V. Diaz in his keynote address of our 2011 Congress,” said Lito B. Zulueta, Philippine PEN national secretary who drafted and read the resolution, “we are specifically monitoring the developments of the summit of the Intergovernmental Panel on Climate Change taking place in Durban, South Africa, up to Dec. 9. We expect it to come up with specific recommendations to address climate change that we will urge governments, especially of industrialized nations with the highest greenhouse-gas emissions, to adopt and implement.

The resolution lays out the writers’ battle plan against climate change.

“Since the issues revolving around the issue are technical and geopolitical, beyond the immediate comprehension of laymen and non-politicians,” the resolution read, “we, as writers and artists, have the artistry and the obligation to make them immediate and compelling. Therefore, we vow to use the powers of the pen and the energy of the imagination to exalt nature and humanity, painting their interconnectedness and evoking their mutual integrity.

“Through our verses, stories, reports and reflections, we will portray the disastrous consequences of severing the symbiosis that should exist between ecology and mankind.

“Writers often pit man against nature: Nature is depicted as impersonal and ruthless; man is represented as puny and defenseless. But it is more obvious from the destruction of the environment and the worsening effects of climate change that nature is the victim and man is the victimizer. Through our writings, therefore, we will serve stern warning to people  of the need to change their ways or else face annihilation.

“Through our discursive and creative writings, we will invoke the need for the restoration of the proper equation that should obtain between man and nature. In this case, we will not only produce a literature of survival, which is the theme of our 2011 Congress, but also a literature of communion.”

Other resolutions passed include one urging the release of writer and political prisoner Ericson Acosta, as well as writers abroad especially monitored by the International PEN’s Committee on Writers on Prison,  in which the Philippine PEN Center holds a seat; another reiterating the speedy trial of those behind the Maguindanao massacre of 2009, in which most of the victims were journalists and writers; and still another repeating the resolution passed during the 53rd congress in which the PEN vowed to work for quality literature education by organizing seminar-workshops on literature pedagogy across the country.

The panel discussions, which the PEN has pioneered, were, as always, very engaging. 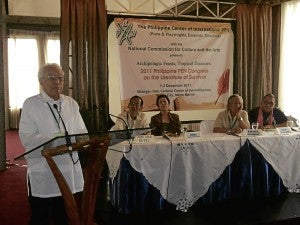 “I was able to attend the second day only,” said one observer, “but I must say that you had amazing panelists, and the topic was so interesting and inspiring! In fact, I am now thinking of trying eco-poetry, and it’s so timely because I recently came from an out-of-town trip and experienced nature.”

Panel topics and their writer-discussants were:

The José Rizal lecture was delivered by historian and 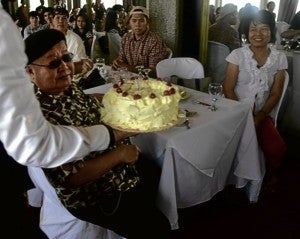 “One could say that banknotes were a form of public history, or a document that expressed a given historical past as understood by the monetary authority,” Ocampo said. “The use of historical figures or events on a banknote is an attempt to connect past and present to achieve relevance for the end user….

“Next time you open your wallet, take time to study the details in the banknotes, reflect on the reasons for the design, and you will never look at money the same way again.”

Before the congress closed, birthday cakes were brought out for Diaz and F. Sionil José, Philippine PEN founder and National Artist for Literature, who were celebrating their birthdays Dec. 2 and 3, respectively.

The seriousness of the conference was also alleviated during the traditional PEN Solidarity Dinner, which featured readings, mostly humorous, by PEN members.

The dinner at Dencio’s in Harbor View across CCP also saw the launch of Mindanao-based fictionist Antonio Enriquez’s new novel, “The Survivors,” published by the UST Publishing House.

The dinner was hosted by the Varsitarian, the official student publication of the University of Santo Tomas, especially since the PEN elders—José and National Artist Bienvenido Lumbera, who’s chair of the organization—are Varsitarian alumni. The Varsitarian said it hosted the dinner in connection with the 400th anniversary of UST this year.

As was expected from a gig hosted by the Varsitarian, food and beer flowed freely, the better for the poets and writers of the PEN to summon their imaginative energies to exalt nature and fight climate change.