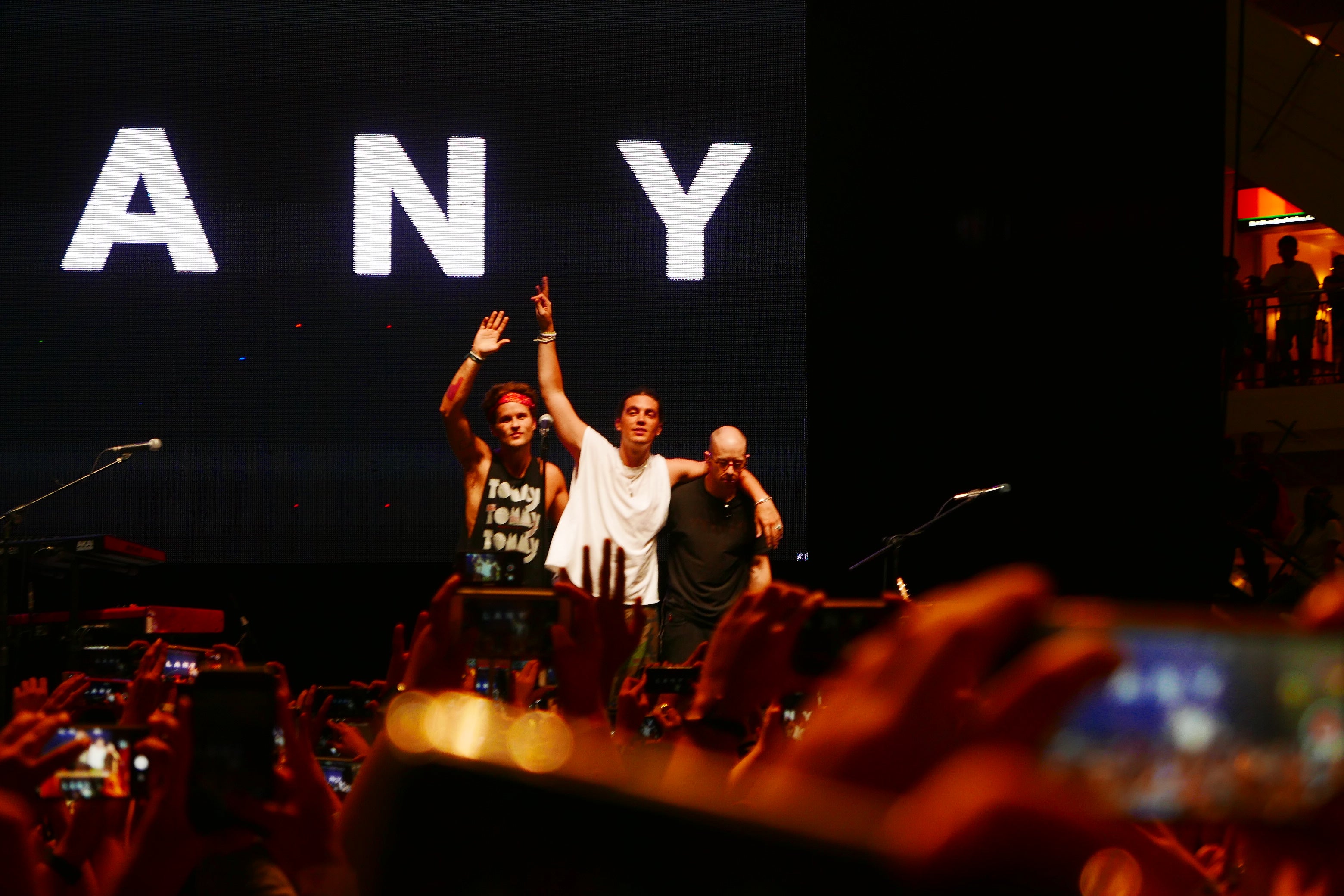 Their sound evokes images of late nights and early mornings; of leaving meals half-eaten for an invitation that promises adventure and romance. Their lyrics are anthems of love, youth and a permanent escape from boredom—subjects that anyone under 30 can relate to. They are Paul Jason Klein, Jake Goss and Les Priest and they’re collectively known as the indie pop trio Lany.

“I’ve always dreamed of being in a band,” says lead singer and lyricist Klein. “I was making music as a solo artist and wasn’t super proud or pleased with what I was doing and I thought I’d give it one more try. So I called Jake and Les and flew to Nashville, and here I am!”

The band’s first two songs— “Hot Lights” and “Walk Away”
—gained significant traction online through SoundCloud. In the following months, Lany would release more singles that would make up the majority of its debut EP, “Make Out.”

The band also embarked on several tours across the United States and signed with Polydor Records by the end of 2015.

Motivated, the trio forged ahead into 2016 with the release of its second EP, “Kinda,” and another major tour across the US. At one point, the guys saw the unexpected demand of CDs—a rarity in the age of digital streaming.

“We were in Detroit and someone was like, ‘Do you guys have any CDs?’” Klein reminisces. “We don’t have any CDs, but I knew I could burn them on my laptop. So we went to Wal-Mart and I stayed up all night burning CDs. We sold them and they flew off our merch table, everyone bought them. I think it became a collector’s item immediately. It was really cool.”

The band greeted 2017 by maintaining the momentum of the previous year with the release of its video for “ILYSB” and the announcement of its much-anticipated debut album.

“I can’t imagine singing a song I have no emotional attachment to,” says Klein. “If it’s not 100 percent from my experiences, then it doesn’t go on a Lany song. Those songs connect with people in such a real way because I’m writing from exactly where I’m at. I am honest and forthright with all my artistic efforts. I also know that whatever I put out into the world is something I’m going to have to sing a million times and it better be true to who I am.”

Klein’s commitment to authenticity extends into Lany’s live performances. “Our shows are an elevation and exaggeration of what you hear in the music,” he says. “The songs take on a heightened sense of life. Everyone is singing back every single word.”

Just one YouTube search is enough to confirm what Klein said. The frenzy and passion from an incredibly devoted audience who knows all the lyrics to the trio’s songs is undeniable. It’s a sight of a thousand hands, reaching into the sky; of fans chanting the anthems that define the struggles of today’s misunderstood youth.

Lany first performed live before a Filipino audience last March at the annual Wanderland Music and Arts Festival held at Filinvest City, Alabang. Singing before thousands of festival goers who sang along with them, the trio says it was the biggest crowd they had ever played for, to date.

“We weren’t headlining that festival, but the audience made us feel like we did,” Klein says.

“We’ve played quite a few festivals where no one was there for us. So, to come out and start the set with ‘Yea, Babe, No Way’ and to have everyone know the words to that first verse… We had no idea how amazing the Filipino fans are and how invested they were in us,” he adds.

The positive reaction from the crowd prompted Lany to return to Manila this month for a mall tour—a first for the band.

The reception was more than anything the band had predicted: thousands of fans packed Ayala Malls all over the city, many waiting in line for hours, hoping for the chance to position themselves in front of the stage when the trio performed.

Not only was the mall tour a success, it affirmed Lany as the band for today’s generation of young Filipinos.

“For a while, Quezon City was our number one city per monthly listeners on Spotify. We have a bigger fan base here than we realized,” says Klein.
Given Lany’s brand of smooth, indie pop, it’s not hard to see why Filipino listeners love the trio’s music. Whether we’re stuck in a commute or making our way to school or work, the sound of Lany’s music allows us to dream about all the adventures life has to offer. It’s the kind of music that makes us want to live. —CONTRIBUTED