Celeste Legaspi and the art of the comeback | Inquirer Lifestyle ❮ ❯ 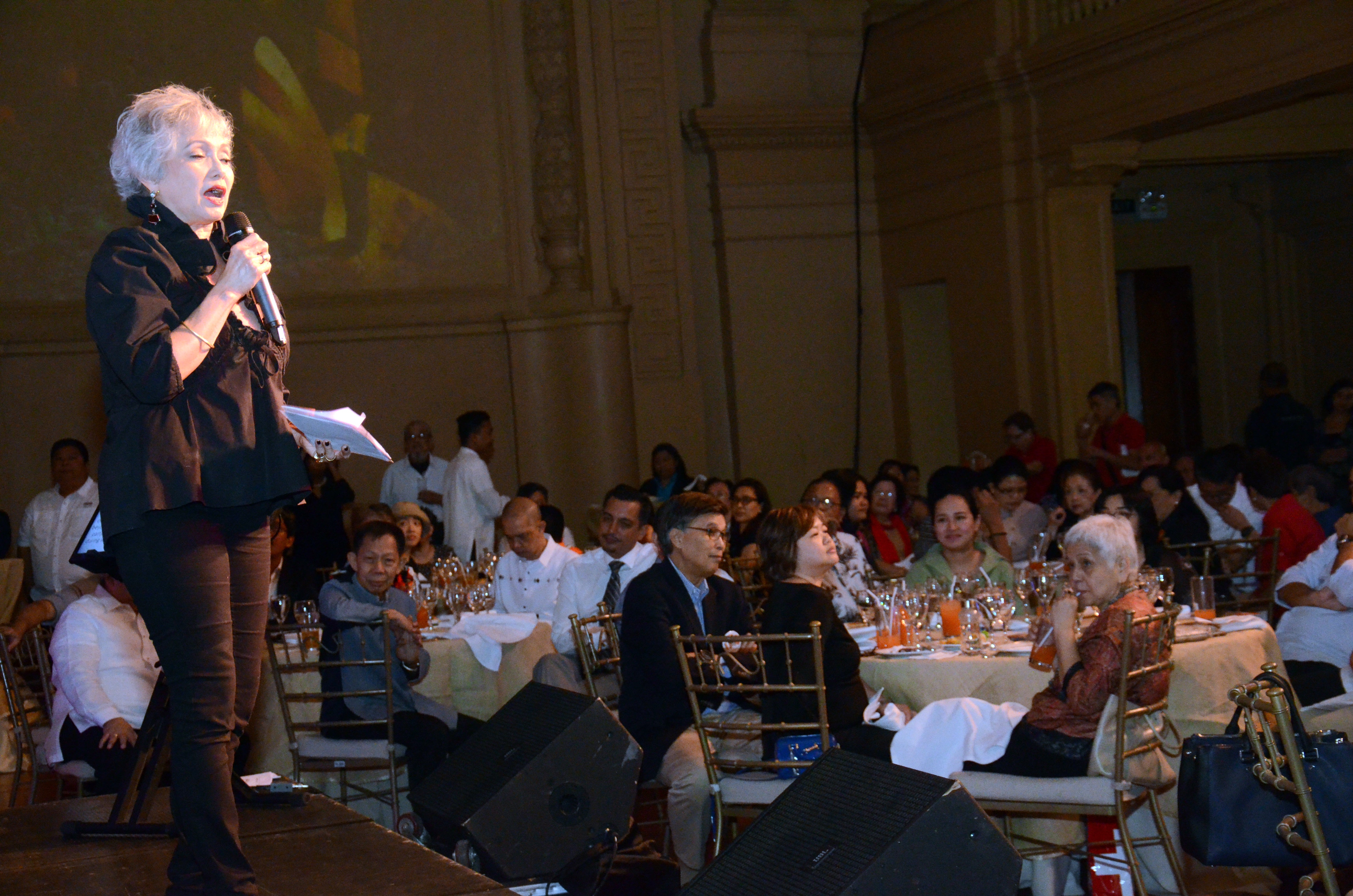 Celeste Legaspi and the art of the comeback

It takes elan for a performer to open a show, not with a bombastic fully orchestrated number, but a spiel that starts off seated on a chaise lounge.

Slowly walking to center stage, she starts explaining the raison d’etre of the show then proceeds to introduce a piano piece. And on cue, the recorded accompaniment for the piano stalls. Undeterred, she signals the maestro at the piano and he proceeds to play the piece unaccompanied by the recorded orchestra arrangement and ends the impromptu number with a flourish.

In her beaded cerulean blue gown flowing to the rhythm, Celeste Legaspi owned the stage for over two hours in a show dedicated to her father, National Artist for Visual Arts, Cesar Legaspi, and her mother who stood by him through thick and thin. With his paintings providing the backdrops to her songs, Celeste’s tribute to her father was not just a daughter’s loving tribute to her father’s 100th year, but an honoring of one artist to another whom she considered the be-all and end-all of her career that went from season to season, achievement to achievement, until 30 years ago when she decided it was time to chill and enjoy the quiet life in an empty nest with her husband, Nonoy Gallardo, who had authored so many of her memorable hit songs.

Although other singers have done their version of Legaspi’s “ Saranggola ni Pepe” written by her husband, one song she never allowed reinterpreted was “Tuliro,” a deeply personal song with heart-wrenching mellifluous lyrics also by Gallardo, which expound on just that one tender second of a dramatic close-to-crazed emotional explosion when Celeste and Nonoy first set eyes on each other.

On a lighter note, and with a costume change to a caftan-like ensemble whose print was a digitized image of her father’s famous painting, “Gears,” Legaspi gamely sang alongside her niece, Marga Roco, a lyric soprano to “Ang Pipit.”

An all girl trio, Baihana, who backed up Ms Legaspi, laid an intricate jazz vocal harmony that shone in their rendition of “Mamang Kutsero” composed by Ryan Cayabyab, Celeste’s long-time collaborator, who was also musical director for the evening.

Playing in the four-piece band was veteran drummer Jun Regalado’s son JunJun. It was to the accompaniment of Mr. Herrera’s Azola Bugbass, an upright stick bass played by Soc Mina, that Celeste sang a haunting “Close to You.”

In her very productive years in the music industry, Celeste produced original Filipino musical plays. A film clip of her current project, “ Larawan,” a musical based on the Nick Joaquin play “Portrait of a the Artist as Filipino” was shown. It is the first time Celeste and manager Girlie Rodis venture into film.

Because she espoused Filipino music, Celeste co-founded with some her singing peers an organization, Organisasyong Pilipinong Mangaawit, that promoted and protected Filipino music (Original Pilipino Music or   OPM) and their interpreters.

Calling on her guests, the acclaimed group The Company, their medley that traced the evolution of OPM sang in a capella was a breathless musical maze that brought the house down. With Celeste, the group paid tribute to the late Willy Cruz, who had passed away earlier this year.

In their youth, Willy and Celeste belonged to a popular show group, The Ambivalent Crowd. A medley of his songs characterized by his words and music managed to internalize emotions even just through their titles: “Mahawi man ang Ulap,” “Kapag Puso’y Sinugatan,” “Sanay Maghintay ang Walang Hanggan” and yet another popular anthem “Bituing Walang Ningning.”

As she wound down, the richness of her brilliant voice, by now showing slight strain, she toned down with a new song composed for her by her husband Nonoy titled “Nagpaalam na ang Araw.” Just as a lump in the throat started to form, she burst into a high finale of Willy Cruz’s award-winning song “Never Ever Say Goodbye.”

And when she went into her encore demanded of her by an audience on their feet, she brought them down to earth with her ditty, a translation of yet another National Artist, Rolando Tinio, “Ako’y Bakyang Bakya,” where she even managed to forget her lyrics while making light of it.

Shows such as these were crafted in this same manner at the height of Celeste Legaspi’s career in the ’80s. This manner of producing shows was then the norm of highlighting singers who made their appearances rare and special through solo concerts or musical specials on television.

Distinct voices and song trademarks claimed for each singer his unique spot in the pantheon of singing gods and goddesses. Celeste Legaspi was and still is Celeste Legaspi, despite her constant declaration of her age, which was in this case, really just a number. –CONTRIBUTED