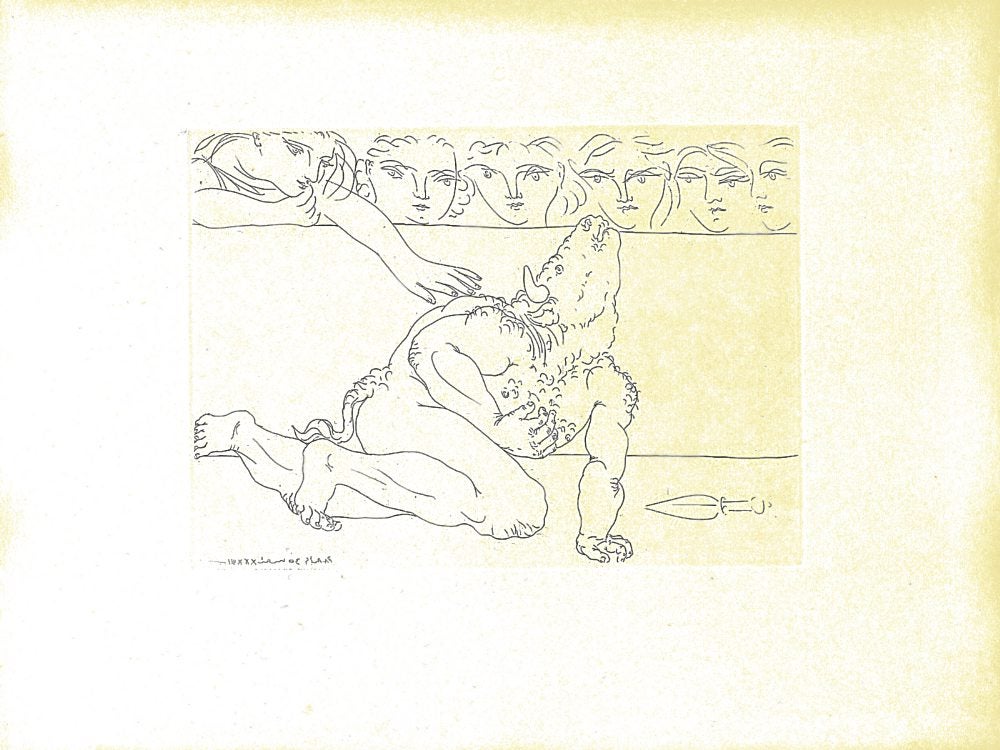 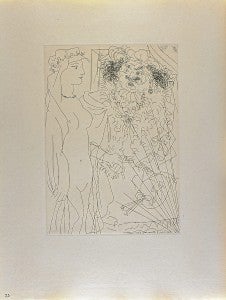 Inarguably the most important art exhibit in the country this year is by a foreigner.

Ongoing until Jan. 7, 2012, in the Galeriya Bangko Sentral of the Metropolitan Museum of Manila at Roxas Boulevard is “Suite Vollard: Pablo Picasso 1930-1937,” 100 prints on vellum paper and laid Montval paper, organized by Fundación Mapfre, Fundación Santiago and the Met.

Although Picasso is a name known by all and sundry, only a few in this country have actually seen a Picasso. This show at the Met provides art enthusiasts “the singular opportunity to experience works by Picasso in actuality, in real space”—and so many of them, running the entire length of the long gallery.

By general consensus, Picasso is considered the greatest artist of our time (that preeminence challenged only by his friend and rival Henri Matisse). It’s been said that, had he not done any painting, his sculptures, graphic art, ceramics or design would still make him a major artist.

Though he was an Andalusian from Málaga, who self-exiled in Paris and refused to return to or exhibit his works in Spain while Francisco Franco was in power, no artist of any stripe or nationality would think of him as a foreigner. He is the granddaddy of them all.

The Oxford Dictionary of Art calls him “the most famous, versatile, prolific and influential artist of the 20th century,” and succinctly describes his entire oeuvre thus: “Picasso’s emotional range is as wide as his varied technical mastery. By turns tragic and playful, his work is suffused with a passionate love of life, and no artist has more devastatingly exposed the cruelty and folly of his fellow men or more rapturously celebrated the physical pleasures of love.” All this is richly illustrated in the “Vollard Suite”—copper engravings in various techniques (etching, burin, drypoint, aquatint, color wash  or a combination thereof) the Spanish master produced for the French art dealer Ambroise Vollard between 1930 and 1937.

Some of the prints, particularly the etchings, look like studies for bigger paintings (“Woman Leaning on Her Elbow, Sculpture Viewed from Behind, and Bearded Head”). Or illustrations for a storybook (the wondrous “Winged Bull Contemplated by Four Children”). 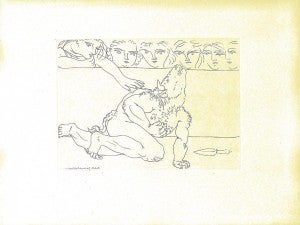 Others appear to be mere doodles (“Rembrandt and Female Heads”). But the aquatints themselves can serve as monochromatic paintings (the poignant “Blind Minotaur Guided through the Night by a Girl”).

Every piece is beautiful. The master’s mastery of touch, from delicate line to broad planes of washes, is, of course, impeccable. The entire set on display at the Met is one of only two complete sets signed by Picasso.

It is a serendipitous show, a classic example of a happy accident. Fundación Mapfre had actually offered the Met another exhibit, “Las Mujeres Filipinas.” But since that show’s trip has been delayed until next year, the foundation offered a replacement, this. (The Met’s board of trustees could hardly believe their luck.)

Dualism of his art

The exhibit is divided into sections according to themes. It is imbued with several myths: Pygmalion and Galatea; Oedipus and Antigone; Theseus and the Minotaur; the Amazons; the Rape of Europa. 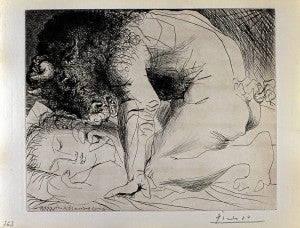 Leyre Bozal of Fundación Mapfre’s Instituto de Cultura provides a thread guiding the viewer from section to section—ranging from Picasso’s transposition of sexual violation into artistic creation, to the dualism of his art, of light and shadow, the Apollonian and the Dionysian, the comic and the tragic, tranquil love and turbulent lust, classicism and romanticism-expressionism, Eros and Thanatos, serenity and chaos.

By the entrance is the section “Vollard,” with three plates. These sketchy portraits are Picasso’s tribute to the man who gave him his first one-man exhibition, in 1901 (as well as the first exhibit of Matisse, in 1904; and the first important exhibit of Cézanne, in 1895). Vollard is famous as a champion of avant-garde art.

The “Rembrandt” series, with four plates, looks odd in a formal sense. Bozal points to the highly contrasting classicist and expressionist lines in limning the figures, all in one frame.

In “The Sculptor’s Studio,” with 46 plates, the artist contemplates his creation with a godlike attitude (reinforced by the Jovian visage), and his model with an undertow of eroticism (she is thought to be Marie-Thérèse Walter, Picasso’s lover during the most fecund period of his artistic life).

In “Battle of Love, or Rape,” with five plates, the subtle eroticism of the previous section flows into sexual violence. This is a devastating section. One can only stare aghast at the portrayal of the creative force transmuted into sexual energy, as the woman is being overpowered by a tremendous animal mass.

The sense of tragedy pervades “The Blind Minotaur,” with 15 plates. The half-man, half-bull monster is a major motif in Picasso’s art, appearing from masterpiece to masterpiece. Here he could be a representation of the artist himself, and the sculptor’s studio has been transformed into the labyrinth and the bullring.

While the Surrealists see the Minotaur as the embodiment of the irrational and the superhuman, Picasso finds humanity in the monster, or, as Bozal would have it, the animal instinct in every human being.

Witness how, despite the monstrosity, he appears all too human in “Minotaur Caressing a Woman,” “Bacchic Scene with Minotaur,” “Woman Contemplating a Sleeping Minotaur.” His scenes attain an unprecedented poignancy in “Blind Minotaur Guided by a Girl,” “Wounded Minotaur,” “Defeated Minotaur” and “Dying Minotaur.”

Bozal points to the fertile ground that nurtured these grotesque growths, in the process rounding up the exhibit: “The ‘Vollard Suite’ reflects Ingres-style classicism, a return to order, monumentality and balance. But it also reflects disfiguration, destruction of form, and expressionistic barbarity, through the figure of the Minotaur or the man who overpowers the girl in cruel sexual abandon.

“The plenitude of the ‘Vollard Suite’ is poured out and flows straight to ‘Guernica,’ which was produced the same year Picasso completed the engravings. ‘Minotauromachy’ and ‘Guernica’ bear witness to the dark mood that invaded European society in the 1930s, on the brink of the Spanish Civil War and World War II.”

Only a limited number of images from the exhibit has been released for publication. Art enthusiasts would have to go to the Met for the full experience, where the actual prints have been installed in progressive arrangement, that upon reaching the end of the gallery the art-lover would feel like near-bursting with rapture.