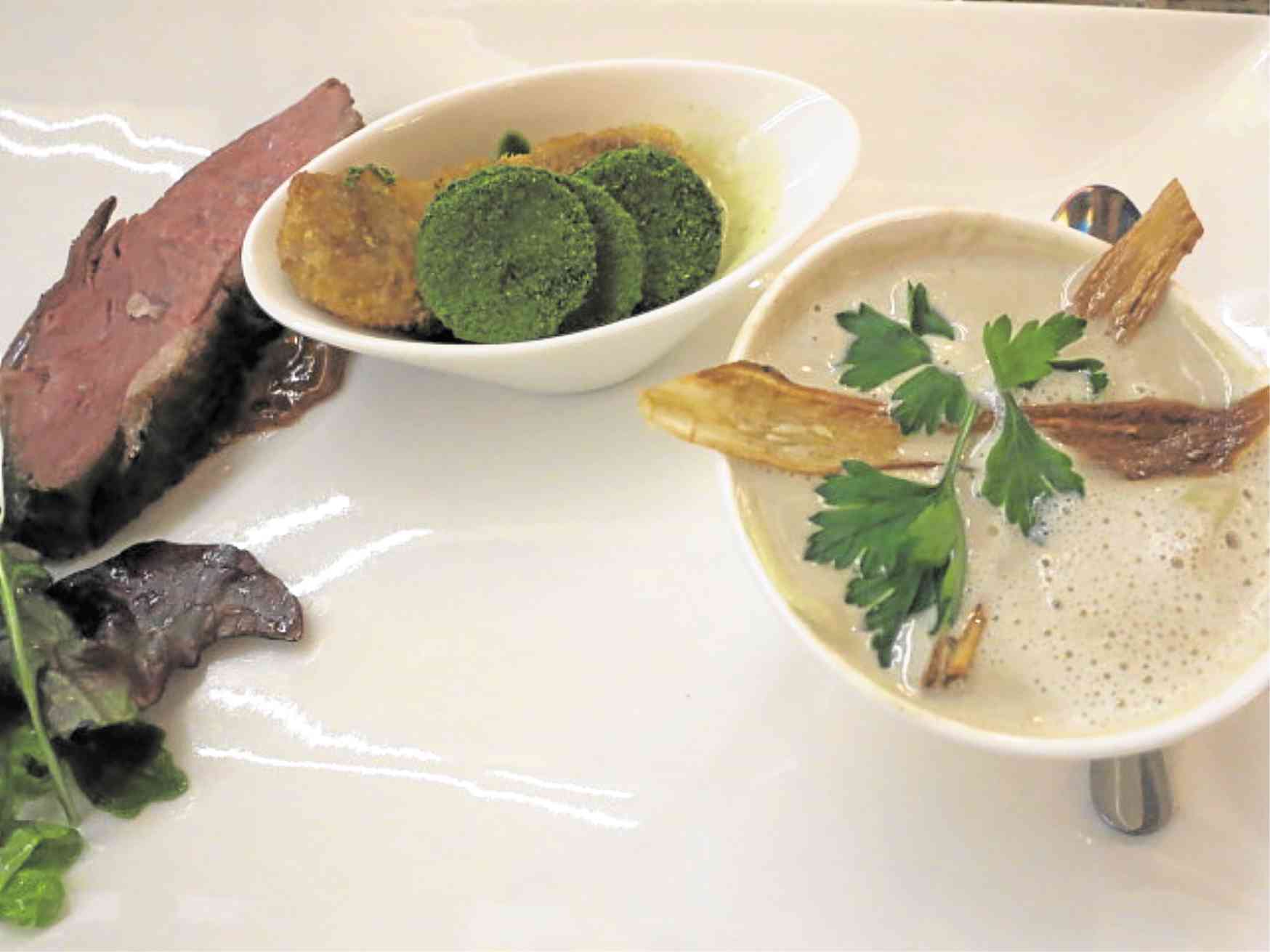 One can only imagine what goes on in the kitchen of Epilogue. A restaurant that anchors its name on the conclusion of a story, it has five chefs, all of them Japanese, preparing complex dishes that hover between European and Asian flavors.

Its menu reads like a tantalizing table of contents, promising a delightful unfolding of a culinary plot. The preface can be an appetizer of Italian sausage plated with green olives, cayenne mayonnaise and balsamic glaze. The story may then move on to a main course of Alaskan king crabs enhanced with uni sauce and aged reggiano cheese, or a humongous plate of prime Angus rib eye with potato gratin, creamed spinach, demiglace and wasabi.

For the finale, there’s tarte tatin made with Granny Smith apples paired with Tahitian vanilla ice cream, or the colorfully named Purple Haze, a crème brûlée made with the humble taro.

In addition, Epilogue’s drinks menu is nearly two pages long, and a bakery at the entrance offers whimsical bread and pastries such as blackberry brioche, orange almond twister and matcha azuki.

All these in a dining room that sits 120. Like a swashbuckling tale that fires the imagination, the owners of this restaurant must be full of daring and courage.

“Epilogue is built on the concept of kodawari,” explains Alyanna Uy, president of the Food Revolution Group which owns the restaurant. Kodawari is the Japanese tradition of dedication and mastery of a craft. In other words, it’s the art of being a stickler for perfection. And what better way to practice this than to hire Japanese chefs, preferably those with extensive experience in their field of specialty.

Hence, the chefs, with credentials that read like a who’s who in the world of cuisine: head baker Tomohide Ono, a pastry chef with 20 years experience who has worked in famous bakeries in Japan, Indonesia and Hong Kong; Hayako Mitsuhashi, whose specialty in Italian cuisine was honed in Umbria and in restaurants in Japan, Indonesia and Italy; Kenji Ishihara, an award-winning pastry chef with 30 years experience in France, Japan and Indonesia; Minoru Sorimachi, with 20 years experience in steakhouses in Japan and now owner of his own steakhouse in Jakarta; and Hiroyuki Meno, the French cuisine specialist who perfected his craft working in Michelin-star restaurants in France and Japan.

As in a story, their prodigious talents are expected to come to a satisfying conclusion in Epilogue. Yet it seems to be the beginning of new chapters as well. Working in the Philippines for the first time, the chefs are discovering new ingredients and reinventing cooking techniques.

At a recent dinner for media and friends, the team served an exquisite menu created by Meno which used local ingredients to create new dishes. There was the humble dilis transformed into a mousse-like escabeche, made citrusy with the flavor of calamansi. Along with an asparagus spear and slivered carrots, two whole dilis peeped daintily from the glass.

The catfish, on the other hand, metamorphosed into a croquette, served with a coulis of fresh malunggay leaves and singkamas dusted with malunggay powder. Then there was the smoked duck, with béarnaise sauce enhanced by dalandan.

Even the dessert did not escape reinvention. The nougat cream, made with honey, egg whites, whipping cream and caramelized almonds and walnuts, was paired with lemongrass (tanglad) gelee and there was also a glass of passion fruit sorbet topped with bits of lychees. Wedged in between: a coulis of raspberry that tasted like candy.

Like a good chef worthy of his toque, Meno goes to the local markets every day to buy what’s fresh and seasonal, said Uy. He has been to Farmer’s Market in Cubao, the fish market in Navotas and the wet market in Cartimar, and admits to doing a lot of experimentation in the kitchen to develop new recipes.

Mostly he applies French cooking techniques on local ingredients, all the while being spurred by the concept of kodawari as his guiding principle.

“This is a chef-driven restaurant,” says Uy. “The concept is that of multiple chefs with their own specialties, working together and complementing each other.”

How this would pan out could be a story in itself, not just the conclusion as the restaurant’s name suggests. Already Epilogue has gotten good reviews in the media. One reviewer gave it two thumbs-up. Others have commended it for its classy, cozy ambiance and solicitous wait staff.

I myself think that its well-spaced dining tables, comfortable upholstered chairs, subdued lighting and extensive menu make it an ideal place for long lunches with friends, or for a romantic date night, or for a quiet evening to plot the beginning of one’s own happy ending.