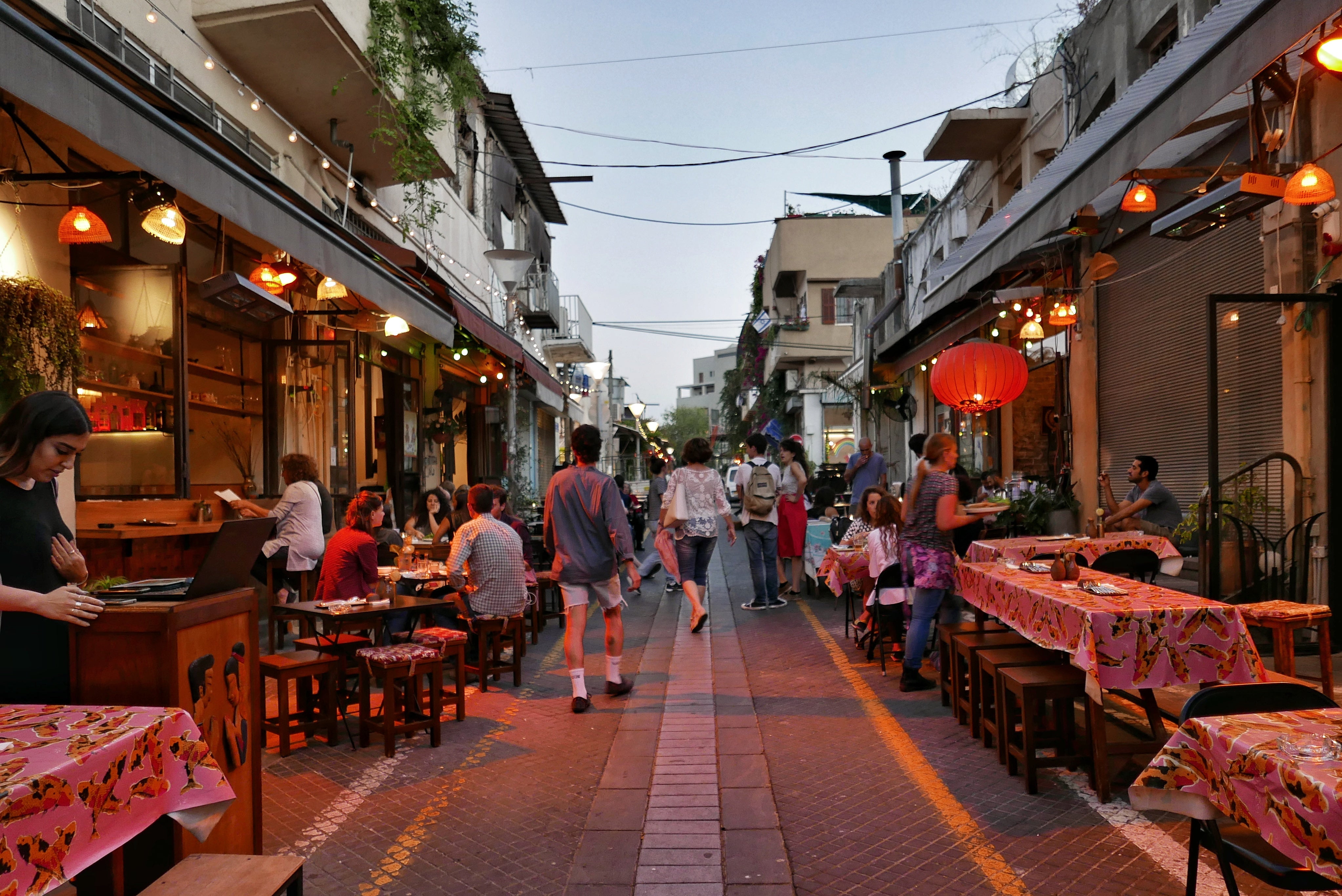 As the sun goes down, restaurant lights set the mood for what’s about to happen at night.

After a 13-hour flight on Cathay Pacific’s newest route, I woke up to a Tel Aviv full of surprises. Having no preconceived notions of what to expect, I was captivated by its unique allure and definitive character.

From experiencing the preparations for the beginning of pride week, tasting cuisines rich with foreign influences, and meeting warm locals eager to show off their city, Tel Aviv left me with strong impressions to last a lifetime.

And to think I was there for only a day.

For all the reports of conflict in Israel, Tel Aviv never felt unsafe. It was actually a pleasant experience walking the streets, exploring the city, sidestepping the cyclists biking through designated bike lanes.

Fitness is a way of life for Israelis. They put a premium on health and exercise, allocating public space for joggers and bikers. There are parks where facilities are available for group workouts alongside playgrounds for children.

Companies allot time for employees to spend outside the office for leisurely walks around the garden. It is part of their corporate life and a nod to work-life balance.

Everyone spoke English and short conversations were occasions for learning things about the people.

The Israelis devote two or three years to army training. Government service is a requirement and an expression of love of country. Seeing men and women in uniform, aged 20 to 23, acting like normal citizens, made it easy for tourists to feel comfortable. They are very attractive and personable looking people.

According to Uri Taub, director of the Ministry of Tourism, the increased awareness that safety is no longer a major issue in Israel is the main reason for the influx of tourists in the past three years. They project this trend will continue in the coming years.

It wasn’t a long ride from the airport. As we were entering Israel’s tech hub and financial center, traffic started building up on the highway. Since this was our first visit, we felt excitement and anticipation. Even the old walls of the city by the beach left us with a sense of awe. Here was history and so much more.

Our guide Tammy pointed to several buildings along the way. These were done in Bauhaus architecture that dated back to the 1930s. A few seemed rundown but were still being maintained, as part of the cultural heritage.

Alongside the Bauhaus structures were newer buildings three stories higher, following the same design but with a modern touch. The newer additions are being used for commercial or office spaces. The architecture reflects the city’s respect for tradition as it adapts to changing times.

We made our way to Old Jaffa, strolling around the pedestrian mall and Nachlat Binyamin. It became apparent that the people of Tel Aviv, or the Tel Avivians, are creative and expressive.

There were galleries and shops that showcased different types of unique art, like paintings made of 100-percent recyclable materials, broken plates pieced together for decoration, and used wrappers made into colorful bags.

Sculptures stood in open spaces. There was street art on the floor and walls, and commemorative markers enlivened the streets.

Artists were doing their craft, blowing glass, painting on canvasses or making accessories from rubber bands. A restaurant displayed antique kitchen equipment in the dining area, another had a mural by the entrance. Elsewhere was an art installation of a big tree without roots, suspended in the air, a commentary of their history as a people.

At night, the streets of Tel Aviv turned into a different place from what it was during daytime. Restaurants and bars opened before sundown and closed in the wee hours.

These establishments came to life with bright lights, music and dancing. It was varied from place to place.

On one street, people were having dinner to boss nova music. Tables were set outside for al fresco dining. The crowd here was fashionably comfortable.

Across that same street, some 15 meters away, bars were playing more upbeat tunes that revved up the energy. People wore more relaxed outfits, sat in groups, mostly drinking a beer.

Shops that had closed for the day had graffiti on their sliding wall to add to the festive spirit.

The lively atmosphere was even heightened because it was the start of pride week, which kicked off in Tel Aviv before moving to another country. The rainbow colors associated with lesbian, gay, bisexual and transgenders were all over the place, in flags, stairs, walls, shops, kiosks and restaurants.

The norm didn’t just mean going for drinks at a bar; it included dancing in clubs that had an art gallery with an ongoing exhibit, a performance or a band act.

The Kuli Ama had a stage for shows and area for video games, and had art clips projected on the walls. They sold popcorn and slushies on the same menu as the alcohol.

Kuli Ama in Aramaic means “a whole new world,” and it was, with all the different sights, sounds and flavors. Yet even if it was particular to Tel Aviv, the experience had an international appeal.

One whole day in Tel Aviv was not enough yet in that short span of time, so much character was conveyed.

There was much more to be discovered and experienced. Our most significant impression had been about the people. Regardless of their cultural and religious diversities, there was a strong sense of community, of being united.

At the same time, while being strongly connected to each other, they were also distinctly unique, adding to the personality of a city that showed me so much more than I imagined.

1. Eat spinach shakshuka and Oreo pancakes at Benedict’s all day breakfast that’s open for 24 hours.
2. Cruise by the sidewalks of the beach toward the Old Tower of Jaffa.
3. Have a quick run and workout in the parks of Old train station to Jerusalem.
4. Visit the atelier of Maskit, the world renowned Israel designer.
5. Have fried cauliflower and mansaf at Puaa restaurant in the heart of Jaffa’s flea market.