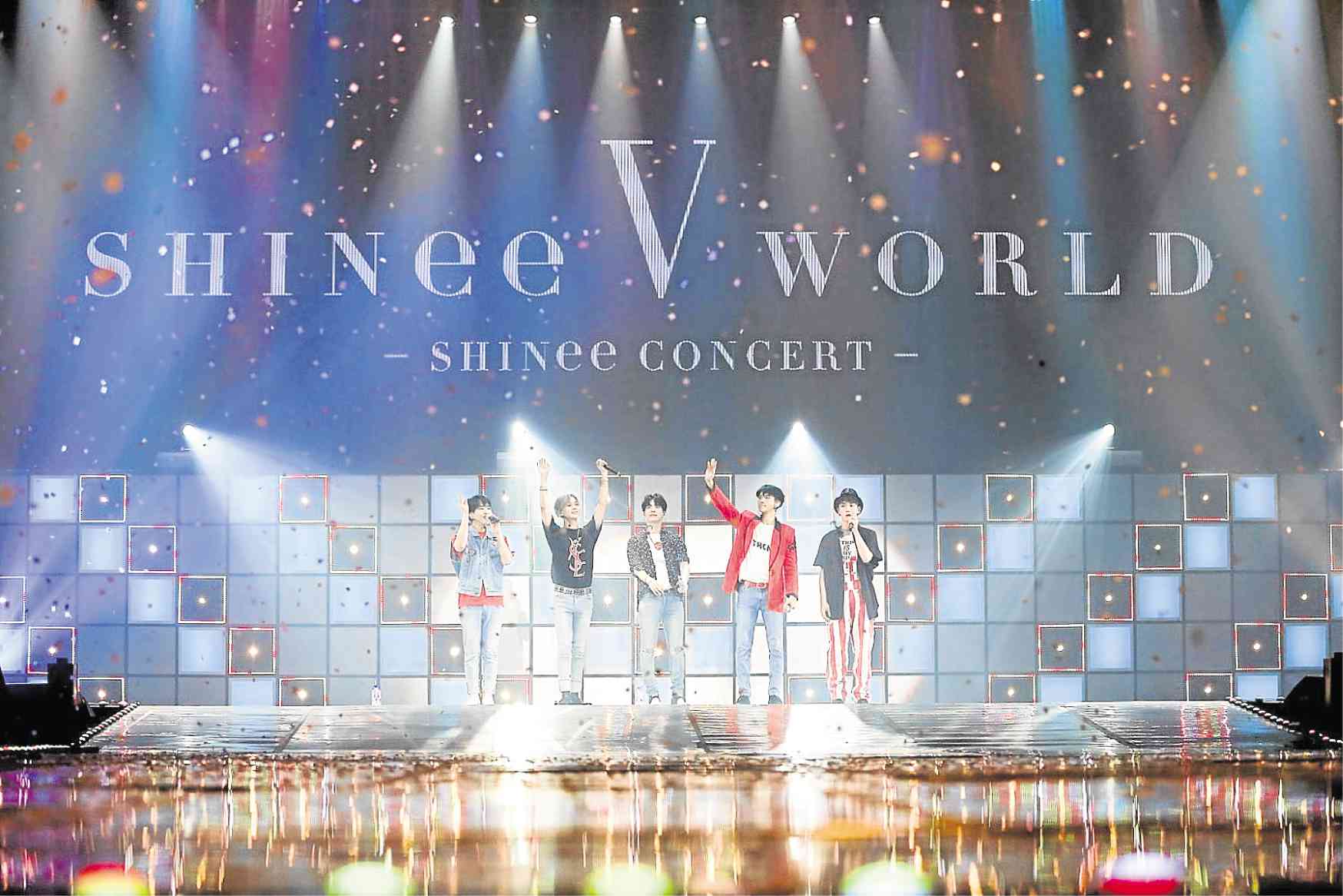 Bangkok is the last stop of the SHINee World Concert V, but they will have a special edition in Japan in October. —SM TRUE

Sisterhood of the SHINee fandom

I had a battle plan when I flew to Bangkok to watch the final stop of SHINee World V tour on my own. The short version of it was that I fly, I watch, I leave. Part of my armor was the downloaded three episodes of “Suspicious Partner” from Viu to avoid chatting with other people.

“No, you cannot do that. You have to make friends,” my friend Bunny said aghast. She has been flying all over Southeast Asia for the past four years to watch concerts of the said Korean boy group. She made a lot of friends during these trips. She even hosts small events for local Shawols (SHINee’s fandom).

She could not be with me in Thailand because she was set to watch the same concert earlier in Taiwan. That did not stop her from worrying about me because this was my first SHINee concert. She was very vocal in opposing my antisocial plans.

She came back to me to tell me that she asked Mariah to take care of me. I received a direct message via Twitter from Mariah introducing herself soon afterward. We agreed to meet on the day of the concert. Mariah is half my age.

Another person who is half my age and I was scheduled to meet was Nine. She’s Thai and I bought my ticket from her. I met her through Bunny. Tickets for the concert were sold out within 10 minutes. I told Bunny this and she sprung into action.

She has 2,500 followers on Twitter and they are mostly Shawols. She asked for extra tickets and in a matter of five minutes I got three offers. I went for Nine’s offer because her queue number was less than 100. This queuing system is designed so that fans do not have to arrive in the wee hours of the morning to secure a good spot in the line. We just needed to be at the venue before 3 p.m. and find our spot based on our queue number.

At first, I paid via online payment service. Nine refunded the amount because she was having a hard time encashing it. She said we’ll just meet each other at the venue. There is a lot of trust involved in this transaction. I trusted Nine to reserve and hand me the ticket on the day of the concert. She trusted me to be at the venue and pay.

Nine, Mariah and Bunny gave me updates and rules of watching a SHINee concert before the event. No, I cannot bring a camera (but could probably sneak one in if I’m brave enough). Yes, ushers will grab cameras from your neck if you are caught. Yes, they are serious about the phone size that you could bring inside the venue.

“You must bring an umbrella. It always rains on SHINee concerts,” Bunny said prophetically. “Wear at least three-inch wedges.”

I flew in with my family and we arrived in Bangkok the day before the concert. I left my 5-month-old phone in a taxi that same day. It meant I will have zero chance of taking decent photos the next day.

“Forget about taking pictures. Enjoy watching the concert because that’s why you are there. I can feel that you will have a great day,” said Bunny, who was trying very hard to console me.

I went to the venue in the morning to claim my ticket from Nine. She also bought a Pearl Aqua light stick for me. I gave her a mini album filled with photos of Minho when the group was in the country last February. We took photos together.

I saw people lining up. Nine told me that they were fans giving away freebies. I made a beeline for it. I was offered a poster by the girl in front of me. I discovered that there were plenty of freebies funded by fans. You just have to be prepared to name a bias because they will give an item based on that. I named Minho and Jonghyun as mine.

The lines were already long and thick when I looked for the spot of ticket number 90. I easily found it and girl No. 94 immediately talked to me in English. Her name is Benz. She is Thai but lived in the US for a few years hence her fluency. She asked me where I am from and where I was staying. Apparently, there were two other big concerts in Impact Arena that day. One of them is of that of Britney Spears. Benz was concerned about how I’m going to go back to my hotel after the concert.

We sat on the sidewalk with Benz translating Thai conversations for me. Thai Shawols also gave away balloons and paper with Thai and English instructions. This was for the fan project. Fan projects are surprises fans do for SHINee during the concert to make it memorable for the group. Candies and mints were also being passed around for free.

The gates open but the sky started to darken. Rain poured suddenly and I was thankful for the umbrella I brought. I offered my umbrella to anyone interested and a Japanese girl, Misaki, accepted it. We stayed close in the cold together before we were allowed inside the venue.

I thought we were going to be separated once inside but we all agreed on a spot and decided to sit together for the next two hours. We talked about Thai dramas, our careers and, of course, SHINee while waiting. We all wondered how long we could stretch our small talks.

I stood next to them when the concert started but lost them before it ended. I thanked them for their company in social media. We all agreed that it was a great day because of SHINee.

It truly was an awesome day. I listened to Onew’s and Jonghyun’s powerful voices when they sang “Please, Don’t Go.” I was treated to Taemin’s electrifying dance performance in “Goodbye.” I discovered that Key has the most commanding stage presence. It was an effort to take my eyes off him. I got to stare at Minho for two-and-half hours. I also learned the fan chants. My favorite was the chant for “Everybody.” I loved all of them equally that, when it was over, I could no longer tell who my bias or wrecker was.

It’s something that I will most likely want to watch again. Onew is set to do his mandatory military service (MS) next year. Jonghyun, Key, Minho and Taemin will follow suit. The Bangkok leg is the final stop of the tour.

I am crossing my fingers that they will have another one next year. I also look forward to meeting more Shawols as they seem to be a caring bunch, sincerely looking after each other.

I found out that the taxi driver returned my cell phone to our hotel. The first thing I did was open my Twitter to read posts about the concert. The first thing I saw was Bunny’s post asking if anyone has seen me and if they know I’m still alive. I laughed at this and slept listening to SHINee’s songs playing in my head.