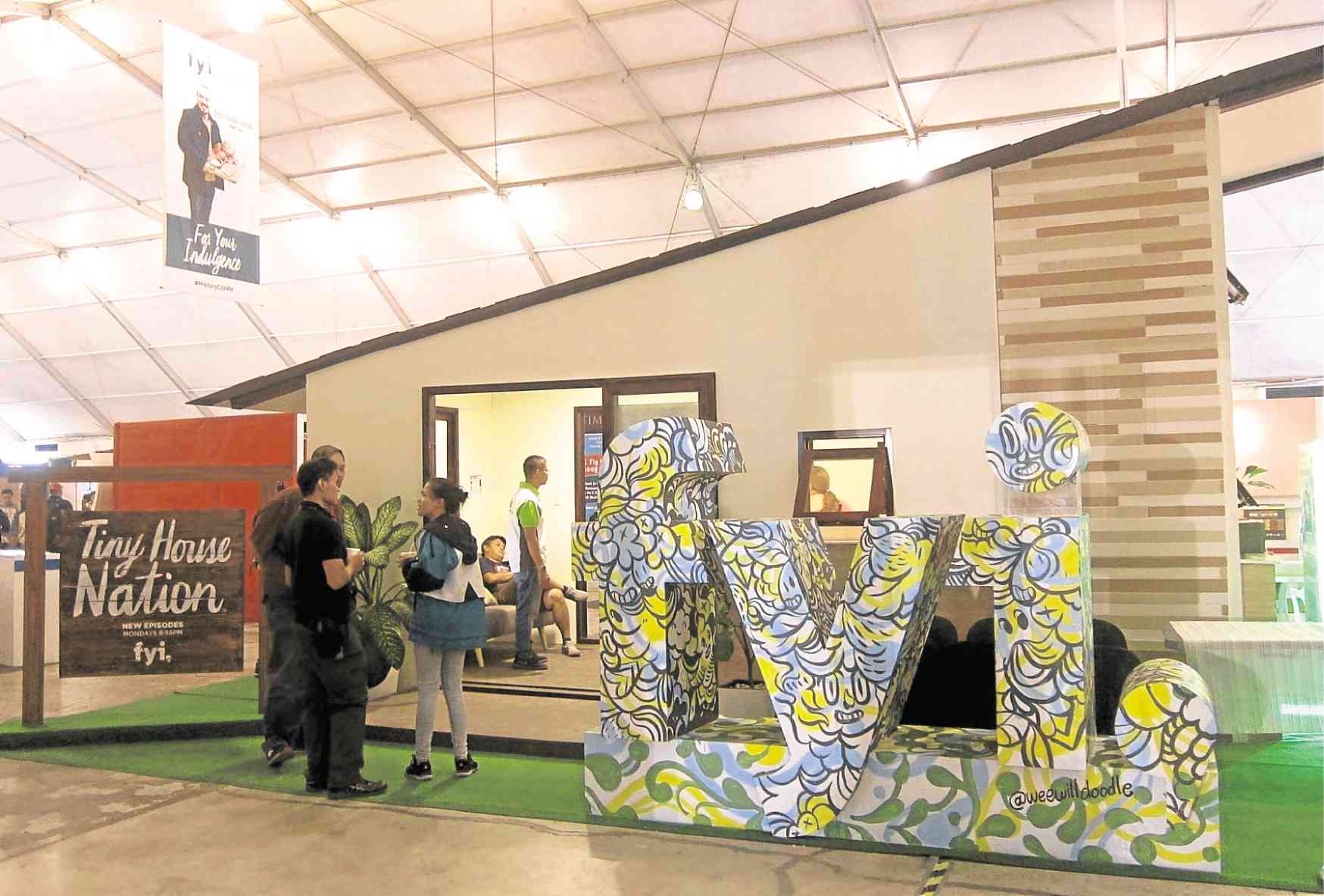 Made by Filipino architects and contractor, the house uses the eco-friendly Palmeco board that’s fire-resistant and keeps rodents at bay. Below, view of its interior from the loft —PHOTOS BY FRAN KATIGBAK

Would a small house cramp your dream lifestyle? Do you think living in a huge home would make you happier or, at the very least, improve your quality of life?

Given our tendency to accumulate stuff, most of us would certainly choose bigger living spaces if we could afford it. But in the last few years, something (literally) small yet significant has posed a challenge to the notion that big is always better—it’s called the tiny-house movement.

Aired in the Philippines on the FYI Asia cable channel, the show documents Giffin and host John Weisbarth’s efforts to help design and construct ingenious mini homes—that is, no larger than 500 square meters—tailored to the lifestyles of the people who have commissioned them.

Giffin and Weisbarth were recently in Manila as headliners of History Con 2017, an entertainment showcase of history, pop culture and contemporary living. Held at the World Trade Center in Pasay City, the four-day affair was organized by the History network and its affiliate brand, FYI.

Though the tiny houses built on the show may not apply to the Philippine scenario, said Giffin, the thought processes behind creating the dwellings, the ideas for use of space, not to mention the concept of decluttering as a means to enjoy life more, make “Tiny House Nation” essential viewing.

The exercise of purging, Weisbarth told Super, is to think very hard about what brings joy and what the tiny-home owners really enjoy.

“Everything else that isn’t that, start to get rid of it and create the room in your life,” he advised. “Everyone has too much stuff… What they do is they start to overwhelm your space, weigh you down, and get in the way of you being able to pursue the things that bring you happiness.”

Giffin’s expertise can help save homeowners on “Tiny House Nation,” as well as those watching the show, from letting go of a few more things that are precious to them.

“The items I build can work on an apartment, a home, or spaces [whose owners] just feel they don’t have enough of it… and for anybody who lives in a space where they feel they can do more with it,” said Giffin.

Think lofts turned into cozy sleeping quarters, staircases of built-in drawers, and doors or sliding partitions that reveal an area but then conceal another. Walls can be outfitted with sturdy hanging contraptions, offbeat corner spaces converted into kitchenettes and reading or activity nooks.

Giffin’s transformative furniture—many of them amazing feats of craftsmanship—make the show doubly addicting.

He has made a coffee table that, when inverted and suspended on the ceiling with carabiners, can be used as a drying rack. There’s the sliding dresser that’s not only clothing storage but also a divider for a couple who wanted separate, private TV nooks. The so-called Murphy Bed can be tucked away into the wall but also folds into a bench. A kitchen island can serve as a dog crate and dining table.

Even Weisbarth, a sportscaster with seven Regional Emmy Awards and a TV career that spans over a decade, couldn’t help gushing about his co-star’s handiwork, though he himself has a great eye for multifunctional home pieces and has contributed nifty design ideas.

The eco-friendly aspect of the tiny-house movement has only affirmed the environmentalist beliefs these “Tiny House” guys have long had.

“Big spaces are very hard to heat and hard to keep cool,” said Giffin, himself a longtime tiny-house owner. “Small spaces require a lot less energy to do both… To live in a capacity that doesn’t require so much electricity and fuel, one of the best ways to do that is simply reduce the size [of one’s living space].”

Weisbarth doesn’t live tiny but is instead an eco-warrior for Surfrider Foundation, a network of activists who help protect oceans, waves and beaches worldwide, while his co-star’s affinity is for powdery mountains.

Giffin’s a daredevil skier, an avocation that heavily influenced his career. He has been building homes since finishing high school because it was a job that allowed as much free time as he wanted for skiing. He has actively pursued it for pleasure and for business. His self-built tiny home can be transported on wheels wherever he and girlfriend Molly, also a ski expert, choose to go.

“It’s so easy to feel like the world is so big and the problem is so large and… it’s easy to push the problem toward politicians and large corporations, [telling them] ‘you guys need to make up the rules or do the work to make big changes,’” Giffin pointed out.

“The tiny house movement, if nothing else, is people saying we can actually have an effect and I’m going to rearrange my own life to be an example to others,” he said.

“The very fact that we now call it ‘movement’ is a testament to the truth to that statement.”