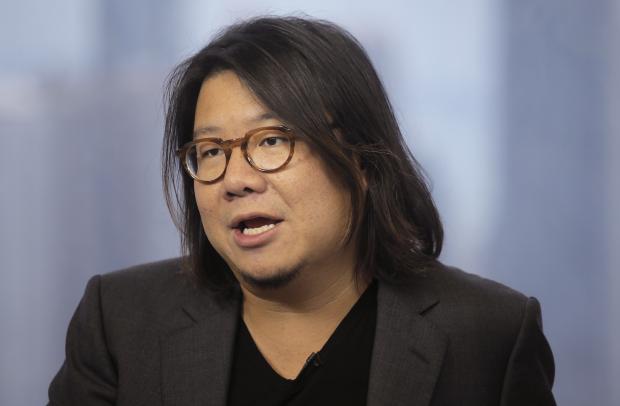 In this photo, taken on Friday, Aug. 25, 2017, Singaporean novelist Kevin Kwan talks during an interview in Hong Kong. Kwan was in Hong Kong promoting the third and last book in his “Crazy Rich” trilogy – “Rich People Problems.” His first book “Crazy Rich Asians” released in 2013, rose quickly in the charts and became a best seller. (Photo by VINCENT YU / AP)

HONG KONG — Kevin Kwan believes that America will embrace the “Crazy Rich Asians” movie, which is based on his best-selling novel of the same name.

The Singaporean novelist was in Hong Kong recently to promote “Rich People Problems,” the third and last book in his “Crazy Rich” trilogy.

His first book, “Crazy Rich Asians,” released in 2013, is the story of an Asian-American girl, Rachel, accompanying her boyfriend, Nick, to Singapore for a wedding, only to learn about Nick’s family wealth and power after stepping off the plane. The book provides a glimpse into the decadent and opulent lives of Asia’s ultra-rich. Its popularity gave birth to a sequel, “China Rich Girlfriends.”

It didn’t take long for Hollywood to notice the success of Kwan’s books and buy the rights to make “Crazy Rich Asians” into a film.

Kwan served as an executive producer on the “Crazy Rich Asians” movie, and said it was a long time coming for Hollywood to make a romantic comedy with an all-Asian cast.

“People are really eager to see if Hollywood keeps its promise and rolls out this movie the way we want it to,” he said.

Hollywood came under heavy criticism for so-called “white-washing” last year when Tilda Swinton was cast as a character that was originally Tibetan in “Doctor Strange” and Scarlett Johansson played the cyborg protagonist in the Japanese anime remake “Ghost in the Shell.”

More recently, British actor Ed Skrein was cast as a Japanese-American character in a reboot of “Hellboy.” After a backlash, Skrein announced that he had withdrawn from the film.

Kwan said that for “Crazy Rich Asians,” he and the film’s director, Jon M. Chu, insisted on an all-Asian cast.

“It’s really been a dream come true, you know,” Kwan said. “Because even from the very start, when Hollywood was first interested in adopting it, I was thinking, Michelle Yeoh would be perfect, Constance Wu would be perfect. All these people, the fact that the dream sort of all came together.”

Wu, the breakout star from the sitcom “Fresh off the Boat,” plays the unassuming Rachel, while Yeoh plays her boyfriend’s disapproving mother. The dashing, rich Nick is played by newcomer Henry Golding. Others in the cast include “Hangover” star Ken Jeong and Harry Shum Jr. from “Glee.”

With racial tensions on the rise in the United States, Kwan said he remains confident that Americans will embrace “Crazy Rich Asians.”

“They have a history of multiculturalism in the industry, but over the last few years, it’s really, I think, the corporatization of Hollywood, the fact that it’s owned by these big huge corporations, where they just want to see profit, profit, profit,” Kwan said. “They take a lot less risks and a lot less artistic risks. But I think that’s changing, it really is, because the audience is demanding it, not just the Asian audience, the American, white audience is demanding it.”

When asked if his “Crazy Rich” trilogy glorifies the lives of the top 1 percent in Asia, Kwan’s answer was a definitive “No.”

“My books are satires, you know, they are really comedies of manners,” he said. “So I think most of my readers, when they read it, I don’t think they’re really seeing this world through these rosy lenses. They’re seeing the problems these rich people have. In a way, that’s why I named the third book ’Rich People Problems.’”

“Rich People Problems” is available at bookstores now, and the “Crazy Rich Asians” movie is in post-production and slated for release in 2018.