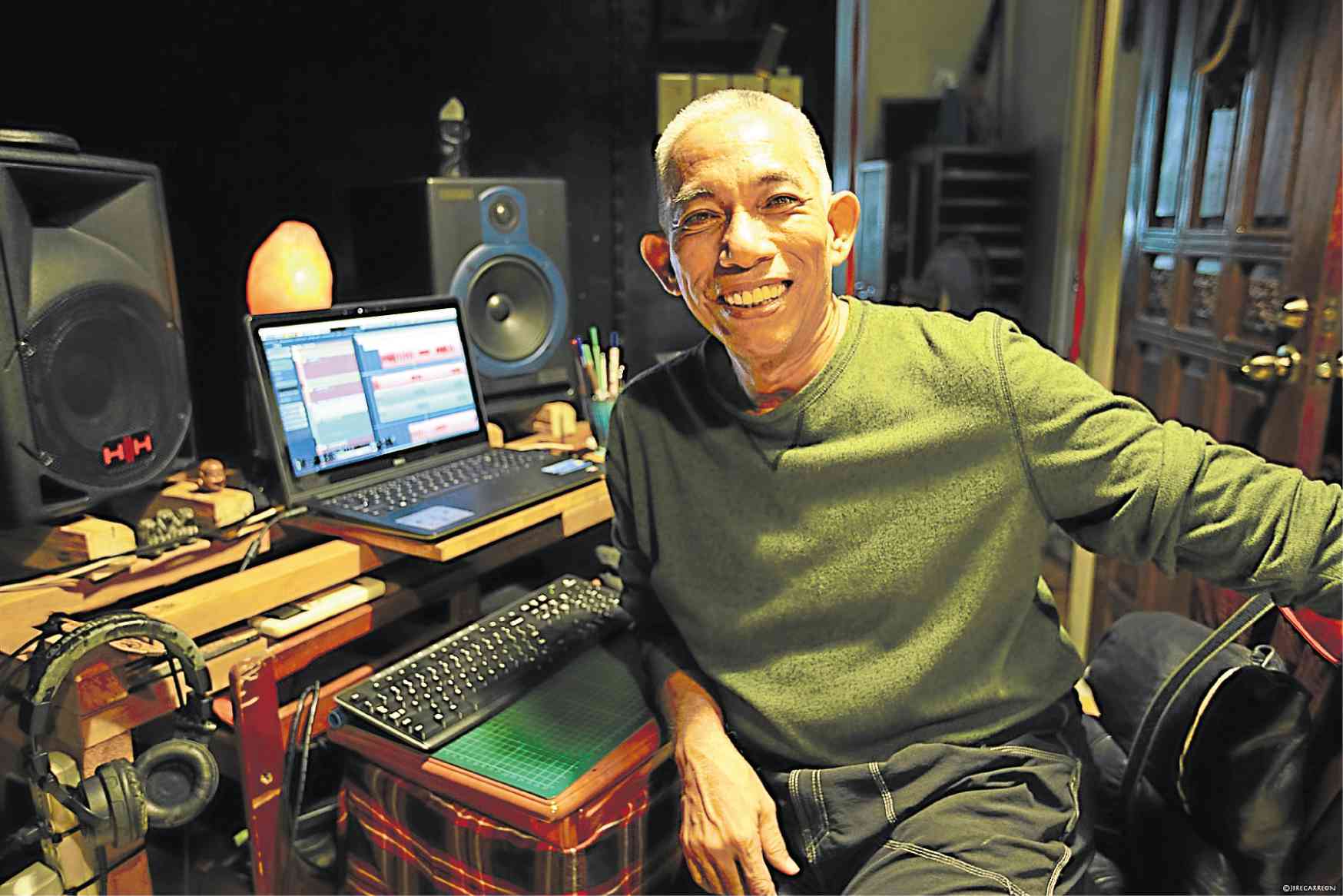 Joey Ayala: The return of the native (again)

Walking onstage to deliver a talk about folk music to an audience of students, singer and songwriter Joey Ayala overheard one of them whisper to another, “Buhay pa pala siya!”

After the talk, Ayala asked the student what gave him the idea that he might have already departed this plane of existence. The student replied, “Our teacher always calls you a legend. If you’re a legend, doesn’t that mean you’re dead?”

For one thing, he was born well after Ayala’s band, Ang Bagong Lumad, played its last gig in 1994.

For another, the student’s only contact with Ayala’s music is through school, because for the last two decades or so, his songs have been part of the Department of Education’s public school curriculum.

“The kids know the songs, but they don’t know me,” said a bemused Ayala.

Not too long ago, he recounted, he was in Aurora province before an audience of Agta children. He entertained them with a performance of “Magkaugnay,” one of his “oldies,” and was amazed when they started singing along. “Anywhere in the Philippines, when I sing ‘Karaniwang Tao’ or ‘Magkaugnay,’ people always said, ‘Kayo pala ’yon!’”

Not only that—if there are public school teachers in the audience, they can dance to the songs as well, having taught the choreography to generations of pupils.

“It was DepEd, not radio, that kept my songs alive,” said Ayala.

Millennials will get more proof of life on Sept. 16, when Ayala performs in a one-off concert with a reconstituted Bagong Lumad at the Music Museum. Titled “Mandiriwa” (Ayala’s Tagalog coinage for “artist”), the concert is organized by a group of youngsters who must have still been in diapers when Bagong Lumad was at their peak.

In fact, the concert date is significant because it marks 25 years since Ayala’s debut in the mainstream music industry.

In 1992, after nearly a decade of building up a cult following from their home base in Davao City, Ayala and Bagong Lumad—vocalist Bayang Barrios, bassist Oni Badiang and percussionist Noe Tio—packed their bags and instrument cases and moved to Manila, where they signed with talent manager Butch Dans, whose main client was Apo, and record label Universal Records.

Ayala was given the full marketing push, launching not one but three albums (“Panganay ng Umaga,” “Magkabilaan” and “Mga Awit ng Tanod-Lupa”) and appearing on prime-time TV—something which no one had ever done before.

Actually, the earliest of the songs were already a decade old. Ayala had first released “Panganay ng Umaga,” his first proper album, in 1981, as an underground cassette. It became something of a cult hit—copies were passed around, dubbed and redubbed—on the strength of such songs as “Wala Nang Tao sa Sta. Filomena” and “Agila (Haring Ibon).”

In those dying days of the martial law regime, they quickly joined the canon of nationalistic anthems such as Heber Bartolome’s “Tayo’y Mga Pinoy” and Asin’s “Masdan Mo ang Kapaligiran.”

Soon after, Ayala formed Bagong Lumad. The name of the band, as he always explained to the audience during those early days, meant “new native” or “alter-native,” an antidote to the slick, commercial, lightweight offerings of OPM at the time.

Bagong Lumad slowly built a following in the cultural and NGO communities, and thanks to the Cultural Center of the Philippines’ outreach program, were able to perform throughout the country.

By 1991, Ayala felt that they were ready to take their music to the next level. The gamble was that OPM audiences just might be ready for something new and original.

In 1992, the band released a fourth album, “Lumad sa Syudad.” By that time it had helped spark the “alternative music” movement of the early 1990s.

Ironically, by the time alternative Filipino music really took off in the mid-1990s with the runaway success of the Eraserheads and other bands, Bagong Lumad had called it quits.

Its final concert, “Awit-Banahaw,” was an ambitious concept production about the fabled mystical mountain. Staged at the Folk Arts Theater in 1994, with ballet choreography by Agnes Locsin and the full theatrical treatment, it was arguably the band’s artistic peak. Two days later, the band broke up.

Since then, generations of local musicians have counted Joey Ayala at ang Bagong Lumad as a seminal influence. Some of them, such as Gloc 9, Bullet Dumas, Dong Abay and Juan Miguel Severo will be guest performers in “Mandiriwa.”

Ayala is, however, quick to douse speculation that “Mandiriwa” marks a “return.”

For one thing, the members of Bagong Lumad have thriving careers of their own: Barrios as a solo performer and recording artist; and Badiang as an in-demand bassist for, among others, Lolita Carbon. (Tio died in 2008.)

“I haven’t been very visible, but I never stopped performing,” he said. “I’ve been performing at least once a week for the last 25 years. It’s what keeps me healthy.”

His usual venue is the Conspiracy Café in Quezon City, in which he is one of the founding investors. (“An investor who is not really invested,” he quipped.)

For the last 15 years, Ayala has also had a parallel career as a workshop designer and facilitator. As his CV puts it, he is “a proponent of pushing the upward spiral of personal evolution, leading with the power of imagination and using the language of the arts.”

Why not? As he enters his sixth decade, Ayala has reached a level of contentment that others might aspire to.

When he’s not doing that, Ayala is more likely than not puttering around in his home studio, where, for the last few years, he has been trying to master the subtleties of Cubase.

His long-term project is to re-record his entire songbook by himself—at this point about a hundred songs or so, his artistic legacy.

“When I was in high school, I would spend hours in the bathroom with my guitar and two cassette recorders,” he recalled. “My dream then was to be able to live in my own recording studio. That was all I was aiming for. Last year, I realized that I had done it. No wonder I’m so content just to sit here. I realized that I need a new dream.”

Ayala counts himself as a late bloomer.

“I was already 35 when I decided to commit to being a musician,” he said. “Before that, I always identified myself as a writer. Even though I was already playing guitar and writing songs, it took me a long time to think of music as something I could do, or that I could do both.”

Nevertheless, he is looking forward to the next creative surge, like the architect Frank Lloyd Wright, who did his best work when he was already past 60.

“I feel the energy for it,” he said. “I can still impress young people with what I can do on the guitar.”