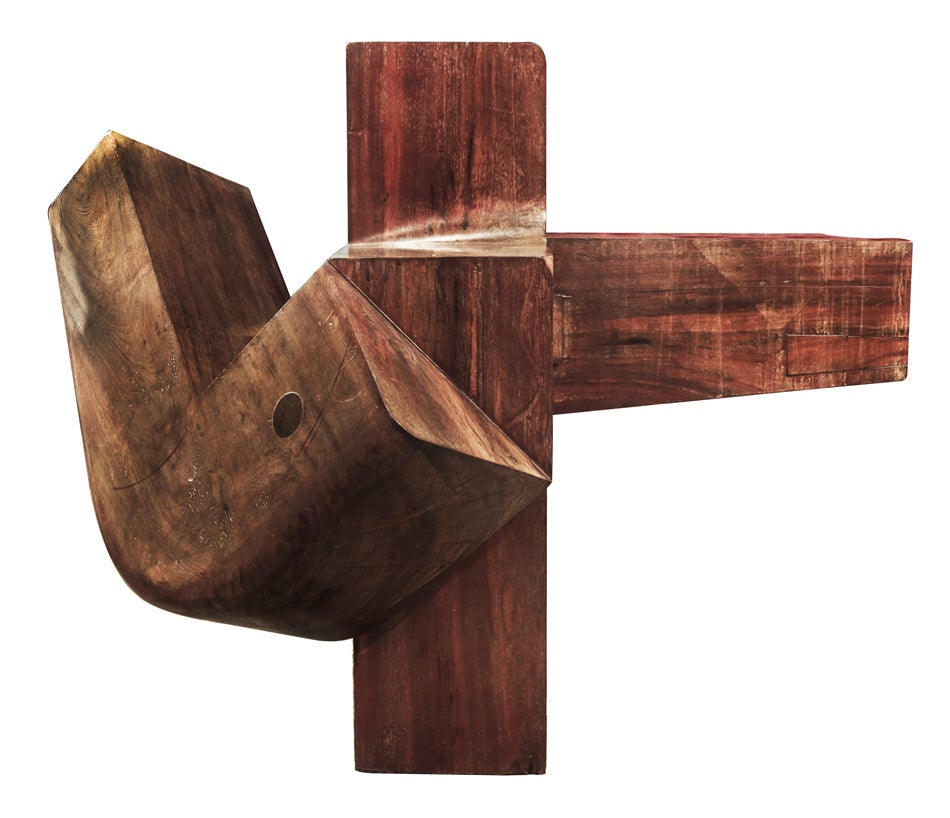 A highlight among several bright spots at León Gallery’s Magnificent September Auction on Sept. 9 is the bidding out of National Artist Arturo Luz’s wooden sculpture “Obu,” which exemplifies his brand of geometric minimalism.

The work is notable, auctioneer Jaime Ponce de Leon said, because it was exhibited in the 1971 Sãu Paulo Biennale—the second oldest art bienniale in the world after Venice. The sculpture then went to an American collection, but found its way back to the Philippines, De Leon added.

Fierce bidding is also expected for National Artist Fernando Amorsolo’s 1951 oil-on-canvas “Boy and Carabao,” which shows a child splashing water at the back of the animal. Starting price is P2.4 million.

Brian Uhing’s terracotta masks, which convey faces worn by the passage of time, has a starting bid of P60,000.

Michael Cacnio’s brass sculpture “Boy with Kite” has a starting bid of P40,000.

The statues of San Pedro and San Pablo are being auctioned off starting at P800,000.

Social historian Martin I. Tinio Jr. said the pieces were made during the first half of the 19th century and closely resembled the statues on the main altar of the church of Calasiao, Pangasinan.

Meanwhile, Calvary Tableau with Gold Ornaments in a Virina, from the 19th century, has a starting price of P1 million.

Tinio noted that this Calvary tableau had an ivory Cristo nailed to a kamagong cross with a line-inlay border of ivory and standing on a wooden mount in pylocrhome.

No Philippine coin could be rarer than a P4 gold coin, which is on sale starting at P1.8 million. The P4 gold coins of 1867 and 1868 were the last currency gold-minted in the Philippines under the monetary system prior to the peseta.

A copy of the first edition of José Rizal’s “El Filibusterismo,” which was published in Ghent in 1891, has a starting price of P2 million. It is bound in leather and in excellent condition.

Among the antique furniture, quite notable is the Sheraton Sideboard from the last quarter of the 19th century. With a starting price of P240,000, it is made of red and yellow narra, carabao bone and lanite.

Proceeds will be used for the various charitable endeavors of the institution.