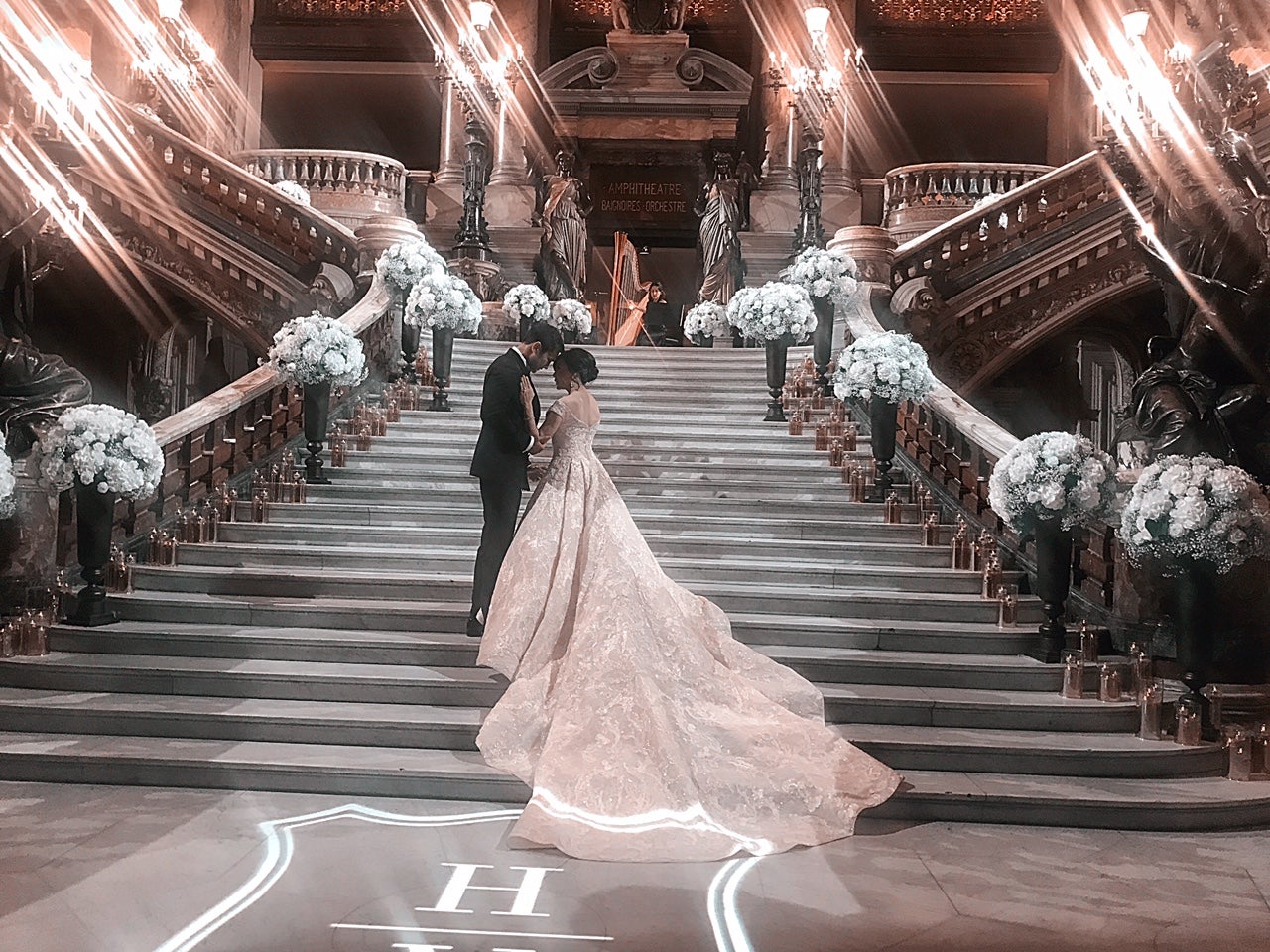 CELEBRITY WEDDING The sight seemed out of a fairy tale:Hayden Kho and Vicki Belo performing on the grand stairway of the Palais Garnier, better known as the Paris Opera House, where their wedding reception was held. —THELMA SIOSON SAN JUAN

PARIS—At the end of the wedding ceremony, there was hardly a pair of dry eyes at the American Church in Paris.

Such was the poignant honesty and candidness of the exchange of vows on Saturday between Hayden Kho and Vicki Belo that it stirred a gamut of emotions in those gathered, prompting a guest to say, “I didn’t expect this otherwise glamorous affair to be a Kleenex moment.”

“To be honest, I don’t know what you see in me,” Kho began, his voice already ebbing with emotion, as he fixed his stare on his bride. “When you look at me, you see the man I could become. When I look at you, I see love … you never gave up on me.”

Usually articulate as his bride was usually gregarious, this time, however, Kho, who spoke extemporaneously, kept his words lean — “I can’t live without you” — and then he merely surrendered to his emotions. (In the many celebrity weddings we’ve covered, we’ve never seen a groom more teary-eyed and given to sobs than this 37-year-old celebrity doctor.)

Belo hardly looked at the note cards she carried, as she spoke about what they’d been through, how marriage is a commitment—that “nobody leaves the room” even as there are arguments, repeating what she told the Inquirer in an earlier interview.

She spoke about how Kho would cook for her “following internet instructions” or would scour places abroad in search of the beauty products she wanted to research on.

The assembly sat in rapt attention as she said, “With you around, Scarlet and I will always be safe, with God’s help.”

Then she detailed how Kho has been a father to their 2-year-old Scarlet Snow—how every night he would read her Bible stories, how he teaches her and goes with the girl to her full range of classes, from Mandarin to gym, “how when Scarlet wakes up at 4 in the morning from a bad dream, you jump out of bed to comfort her and carry her to sleep even when you have a bad back.”

But the “deal maker, Doctor Ravi,” she said as she turned to the officiating minister, “when I knew how we could make a go of it,” was when she went through a difficult time last year—“You were with me every step of the way … in my weakest moment, you were my rock …”

Then with her otherwise flippant voice breaking into a near-sob, she said, “When I felt my ugliest, when I couldn’t look at myself in the mirror, I would look at my reflection in your eyes and you’d always make me feel beautiful …”

We turned around to see people dabbing their eyes—Carol Masibay Garcia and ex-Miss Universe Margie Moran-Floirendo, Hong Kong socialite and style icon Bonnie Gokson had white hankie/tissue to their eyes. Even a few men, who we prefer not to name, wiped away their tears.

The couple’s families and good friends—more than 250—who had gathered that afternoon, knew only too well where Kho and Belo were coming from. Like the entire country, they knew—in graphic detail—the ups and downs of the 12-year relationship that intermittently landed on the front pages of the dailies and became the stuff of prime-time news, indeed even of a Senate hearing.

But all that now seemed water under the bridge, so to speak—the rough seas made calm by the presence of Dr. Ravi Zacharias in the couple’s lives, the spiritual mentor of Kho who was officiating in the wedding. It was Zacharias’ influence that led Kho to pursue studies in Christian apologetics at Oxford and then in a Los Angeles university.

He told the couple at the beginning of the rites: “Your relationship has walked a winding path, many a valley …” until they reached the top.

He admonished them: “Let your treasures be the things that matter to God … let your roots go deep and be the foundation of your home …” because a storm easily destroys shallow roots.

Earlier in church, with the fans who had gathered the night before to catch a glimpse of the show biz celebrities attending, the air was rich in style. The substance came during the vows of the Christian rites.

As the groom waited at the altar, in walked the cute flower girls Taylen Joy Tan-Chi, Zia Dantes (the tyke of Dingdong Dantes and Marian Rivera) and Scarlet Snow who stopped halfway onto the aisle and looked at all these strangers around her. Kho had to walk to her and lead her by the hand to the altar. Bible bearers were Andrew Tan-Chi and Nate Alcasid, the son of Ogie Alcasid and Regine Velasquez.

At around close to 6 p.m., the door opened and as “With You” from the musical “Pippin” played, Belo strode in, a beautiful beaming bride clutching lilies of the valley, said to be the most expensive blooms today. She was in a blush pink wedding gown covered with French lace silk embroidery and a highly discriminate distribution of glitter. The lace embroidery bore a baroque pattern, the twinkle of glitter coming from transparent crystals, beads and sequins. It had a 3-meter-long train and 5-meter-long veil.

Certainly not over the top, it was clearly a labor of love by Michael Cinco. The bride’s medium-length hair was swept to one side, its soft curls barely touching her bare shoulders.

If the nuptial rites were emotion-filled, the reception that followed in an erstwhile secret location was simply jaw-dropping. It was in one of the great landmarks of Paris—the Palais Garnier, better known as the Paris Opera House.

The guests were driven on buses to the Palais where a red carpet walk awaited them.

Among the celebrities, aside from the Dantes, were Alden Richards, Jodie Santamaria, Derek Ramsay, Richard and Lucy Gomez, Lovie Poe, Pops Fernandez, Ogie Alcasid and Regine Velasquez (who would emcee the reception), Piolo Pascual who, in church, sat on the side of the altar with the groom’s family and was tasked by Kho to video some parts of the rites. Famous blogger Bryan Boy was also there.

Walking inside the Paris Opera House, one was dumbfounded—with its rich frescoes, gold-laden columns, it’s awesomely elaborate architecture. This must have been the first Filipino wedding reception held in its gilded hall on the second floor. We would learn later that the couple had to rent the entire Palais for that day to be able to hold the reception.

As guests milled about taking in the sight, the surprise of the evening came—at the top of the grand stairway was the groom beginning to sing. Then the bride walked in—the newlyweds performed “Take Me as I Am” from the musical “Jekyll and Hyde.” With the two twirling at the top of the stairs, the sight seemed out of a fairy tale.

Their front act were song performances by a group of tenors and sopranos. The newlyweds’ number over, the guests were led up the stairway to the gilded hall where the tables were arranged for dinner.

Leading stylist Robert Blancaflor, who did the setup, was right when he told us earlier: “You can’t compete with the Opera. I used simply the all-white bouquets and that’s it—peonies (Belo’s favorite flowers), Ecuador roses, tulips, hydrangeas.

Kho Sr., a family medicine specialist, said how he was most proud of his son when he “turned his life around” and got back on his feet after he stumbled. He reminded them that marriage isn’t about winning arguments but proving love.

At the end of the night, Litre said what many guests must have felt: “I didn’t feel as if I was an extra in a huge Hollywood production, but how I am part of the ups and downs of their lives.”